Strengths vs Weaknesses: Much Has Changed For The Vikings And Seahawks

Seahawks fans debated last week which matchup was most favorable to Seattle in the first round of the playoffs. Washington played in the worst division, but had a red-hot quarterback with some nice weapons. Green Bay had Aaron Rodgers. Minnesota had fallen to the Seahawks 38-7 without scoring an offensive touchdown. Bingo. Not so fast. The Vikings feature one of the NFL’s best defenses and were missing four key starters in the last game. They are a worthy adversary. Time to reacquaint ourselves with their strengths and weaknesses, and what has changed since the last contest.

This was a butt whooping last time. Seattle converted nearly 70% of their 3rd downs and scored touchdowns on 75% of their red zone possessions. If not for a Thomas Rawls fumble on their first drive, Seattle likely would have scored more than 40 points.

The big asterisk is that the Vikings were missing their best three defensive players and a fourth starter. Imagine if Seattle had played a team without Kam Chancellor, Earl Thomas, Bobby Wagner and Brandon Mebane.

Vikings safety Harrison Smith might have been the best safety in football this year. His partner at safety, Andrew Sendejo is a solid run defender, if not a spectacular overall safety. Anthony Barr is a multi-faceted second year linebacker who is excellent at rushing the passer and in coverage, and was going to be the guy responsible for running down Russell Wilson on scrambles. Linval Joseph has been one of the best interior lineman in the league this year, especially elite at run stuffing. None of those guys played.

Technically, Barr and Smith were in for a series, but that was it. The Vikings were going to lose that day no matter what since their offense could not move the ball, but Seahawks fans should brace for a much tougher affair given that Smith, Barr and Sendejo are all expected to play. Joseph is the big question mark after missing the game last week. Most expect he will give it a shot, but may not be at full strength.

Pass protection is the one to pay attention to here. The Vikings had trouble getting to the passer in week 13, but a return of Barr, Smith and Joseph would certainly change the equation. Everson Griffen is their featured rusher with 10.5 sacks, but he was held in check last game. As you can see from the table above, the Vikings have climbed six spots in the rankings for sack rate since the last game. That is a sizable leap, and merits attention.

Expect Mike Zimmer to order some very aggressive blitzes early on to take advantage of his team’s energy and to make a statement about their physical intentions. They will want to prove to Seattle and themselves that the game will be different. The offensive lines ability to hold up under that onslaught will be crucial to determining how close this game will be.

Minnesota is excellent in situational defense. It is very likely that a large portion of their struggles defending 3rd downs and red zone opportunities versus the Seahawks was attributable to their missing stars. Those moments are about being assignment correct and fast to the ball. The only defense Seattle has faced recently with similar talent at disrupting 3rd downs and red zone chances was the Rams. The Seahawks did okay there (47% on 3rd down, 67% on red zone), but it was their worst offensive performance in two months, scoring just 17 points.

The Vikings have slide quite a bit in passing yards, yards per attempt and completion rate. Smith missed an additional two games after the Seattle loss, as did Barr. Still, the Vikings corners are vulnerable. Terrance Newman is limited and 37 years old. Xavier Rhodes is talented, but inconsistent. Tyler Lockett and Doug Baldwin abused the Vikings secondary last game, and are tough covers no matter who is playing corner.

Seattle welcomes back Marshawn Lynch, and will face a tough run defense whether Joseph plays or not. The Vikings have a higher ranking in rush defense now than they did before playing the Seahawks, which is remarkable considering Seattle rushed for 173 yards. Arizona, Chicago, the Giants and Green Bay all rushed for under 100 yards. Even with the improvement, the Vikings still rank in the bottom half of the league in rushing yards allowed and yards per rush. The running game is a strength for Seattle and will be key in the frigid weather.

This is where things get challenging for the Vikings. They were healthy on offense in the first game and they still totalled just 125 yards and 0 offensive points. The hopeful point for Vikings fans will be that they cannot play any worse. Bruce Irvin said Teddy Bridgewater “was so scared,” in his postgame comments, which I’m sure will serve as special motivation for the young quarterback.

Adrian Peterson hurt his back against the Packers and was reportedly very sore after the game. They need him to be special to have a real shot at winning. Bridgewater lacks weapons, and is indecisive. Stefon Diggs and Kyle Randolph are the key targets, with Jarius Wright being a 3rd down weapon. Mike Wallace is not going to beat anyone in this offense.

Bad news gets worse for Vikings fans. As you will see in the table below, the Seahawks defense they will face on Sunday is markedly improved from the one they could not score on in week thirteen. 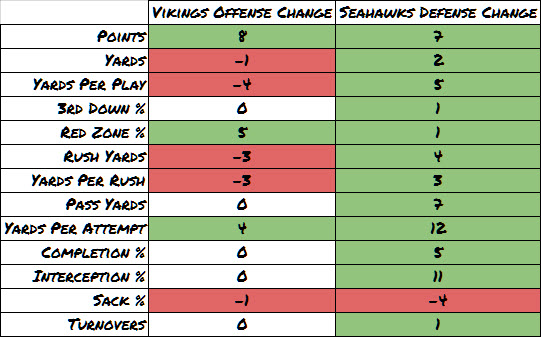 Uhh…Peterson is the best back in football. The Vikings protect the football well. That is really about it. This is not a strong offensive team, and they don’t have the weapons or quarterback to challenge the Seahawks secondary.

Look at all that green in the table above. The Seahawks defense ranks higher in every category except for sack rate. Guess what? The Vikings rank 31st in the NFL in opponent sack rate, so even that category is strongly in favor of the Seahawks defense. Keep in mind that Frank Clark had a career high two sacks in this game, and the Seahawks now have Jordan Hill back as well.

This is the #1 scoring defense and #2 yardage defense in the NFL going against the #16 scoring offense and #29 yardage offense. It is a huge mismatch. Allowing the Vikings to score anything more than 15 points would be major disappointment.

Keep in mind that it will be cold, and Peterson fumbles more than any other back in the NFL.

The only Vikings TD in the first game was via kick return. Minnesota ranks #1 in kick return average. Seattle is a good kick coverage team and will be on high alert. Zimmer knows he will need a few breaks to win this game, so be on the lookout for trick plays and fakes. They pulled off a bold fake punt in Green Bay last week.

On the flip side, the Vikings have to be worried about covering Lockett on punts. The Vikings are not good on that front.