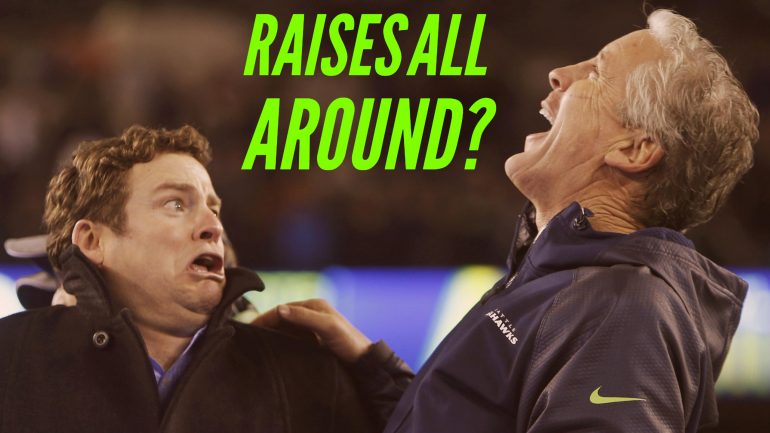 It happened. It finally happened. News broke tonight that John Schneider has signed a five-year contract extension that will pay him top dollar, and keep him in Seattle through the 2021 season. Calling this huge is like saying Mount Everest is tall. The Seahawks franchise has been around for forty seasons. In the 34 years before Schneider (appropriately abbreviated to B.S.), Seattle won six division titles and won a single conference championship. In just six seasons, Schneider has helped build a roster that won three division titles, two conference championships and the only franchise Super Bowl ring. It is fair to say he did not do it alone. We too often, though, spread blame and credit to the point where both lose meaning. Schneider is a titan. He is our titan. In a nation where there is bitter debate about who should get the keys to the White House for the next four years, Seahawks fans can safely cross party lines to celebrate five more years of the best general manager in football.

All logic pointed to the Seahawks retaining Schneider. He has delivered tremendous talent to the coaching staff and the results have been irrefutable. Still, you can never be sure what will happen in a contract negotiation. Schneider could have wanted to move on for personal or professional reasons. He could have asked for more money than the Seahawks were willing to pay. Paul Allen might have decided Pete Carroll was the one with the Midas touch, and be stubborn about paying top dollar for the general manager position.

We will never know how close this came to not happening. Thankfully, we don’t have to. The fact that things dragged on this long indicate the parties were not seeing exactly eye-to-eye from the start. Where were the hangups? Who cares? They worked through them and got a deal done.

A win for the community as well

The Schneider family has embraced Seattle as much as the residents have embraced them. Spend a few minutes with Schneider and it is clear he is an authentic man with integrity and a whole lot of grit. If you did not know he was an NFL GM, you would assume he was gym teacher or a bar owner or salesman. His favorite movies star Adam Sandler, Will Farrell, and Jonah Hill. There is no pretense when you talk to him. He used to be so open and honest that his PR department clearly worked with him on recognizing the dangers of being too forthright.

He holds his cards closer to the vest now when it comes to football, but you can tell it is an unnatural state. He would rather be open and assume the best of people. If you ever do meet the man, I’d suggest buying him a beer, preferably from Georgetown Brewery. He will talk to you about football, movies, and family. There will be no condescension. He will look you right in the eyes and treat you with respect.

His wife, Traci, is an amazing women who has given back to the Seattle community in much the same way John has. The charity she started, Ben’s Fund, has raised millions of dollars to help parents of children with autism. One of their sons, Ben, has autism and the experience made them realize how fortunate they were to be in a position to afford the treatments he needed. Many of you know all the proceeds from this site go directly to Ben’s Fund, including a record $15,000 last year. Traci, like so many stay-at-home parents, has shouldered the load of raising the kids while John works countless hours. Through it all, they shine.

Seattle is a better place since they arrived. We are lucky to have them both.

It became clear that there was a domino effect at play here. Carroll has the most leverage. His willingness to sign an extension likely hinged on Schneider getting one first. I wrote the other day that I expect to hear that one of the sticking points with the Schneider deal were the raises he wanted for his personnel department.

We will see if Schneider mentions anything about raises for his scouting department when he next talks to the press. My bet is he wants the world to know the Seahawks reward their personnel people. Trent Kirchner is probably not long for Seattle as a guy who has been interviewed for GM positions the past two seasons. Schneider knows he needs quality people working for him to get the results he needs. Paying top dollar always makes it easier to recruit and retain talent.

It would be a surprise if Carroll does not sign before training camp. The legacy he wants to leave is sustained championship football at the highest level. Sure, returning to Southern California is tempting, but building up someone else’s roster is not his first choice. He came to Seattle with one of the worst rosters in football and free reign to reassemble it any way he wished. This team has been built in his image and to his specifications. They have their quarterback and a killer defense for years to come. Now is the time to pen the final chapter in his historic career.