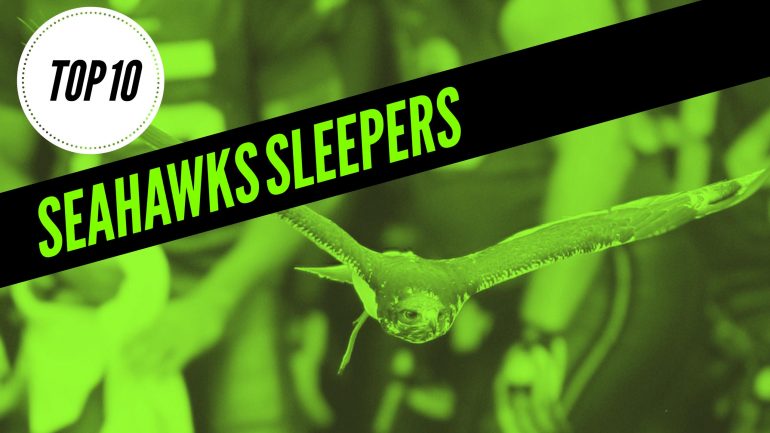 10 Seahawks Sleepers Who You Should Keep An Eye On

It is human nature to focus on things that stand out. Only upon moments of pause and reflection do we recognize things that blend into the larger whole. The same is true with our favorite football team. We talk about stars like Kam Chancellor, and get excited about new additions like C.J. Procise or Alex Collins, but miss players who may far bigger roles than we imagine in the upcoming season. There are at least ten players who are not getting the attention they deserve based on the impact they could have. 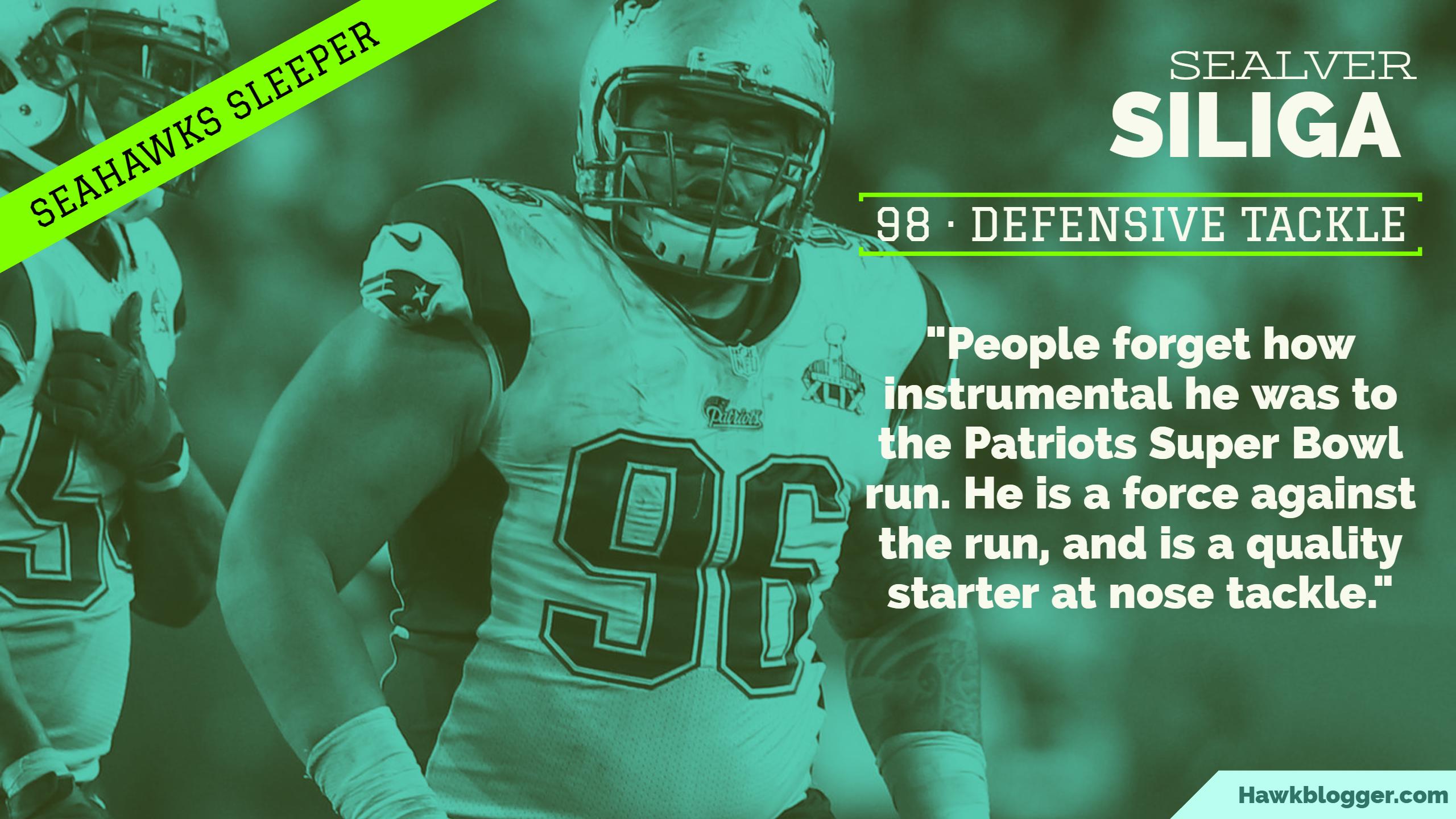 Siliga was one of the most under-the-radar additions of the Seahawks offseason. People forget how instrumental he was to the Patriots Super Bowl run. He is a force against the run, and is a quality starter at nose tackle. If the Seahawks had not enjoyed the good fortune of nabbing Jarrad Reed in the draft, Siliga would be the likely starter. He may well still be. Nobody gets a job handed to them in Seattle, especially rookies.

It was sad to see Brandon Mebane depart. That said, Seattle could boast their strongest run-stuffing defensive tackle rotation of the Pete Carroll era. Siliga, Reed, and Ahtyba Rubin combine to create nearly 1000 pounds of mass on the interior. That does not even include Jordan Hill, who flashed surprising run defense in place of Mebane for a few snaps last year at nose tackle instead of his customary three-technique rush tackle position.

ProFootballFocus.com rightly called Siliga out as a “Secret Superstar” for the Patriots before last season. He may well reprise that role for the Seahawks. 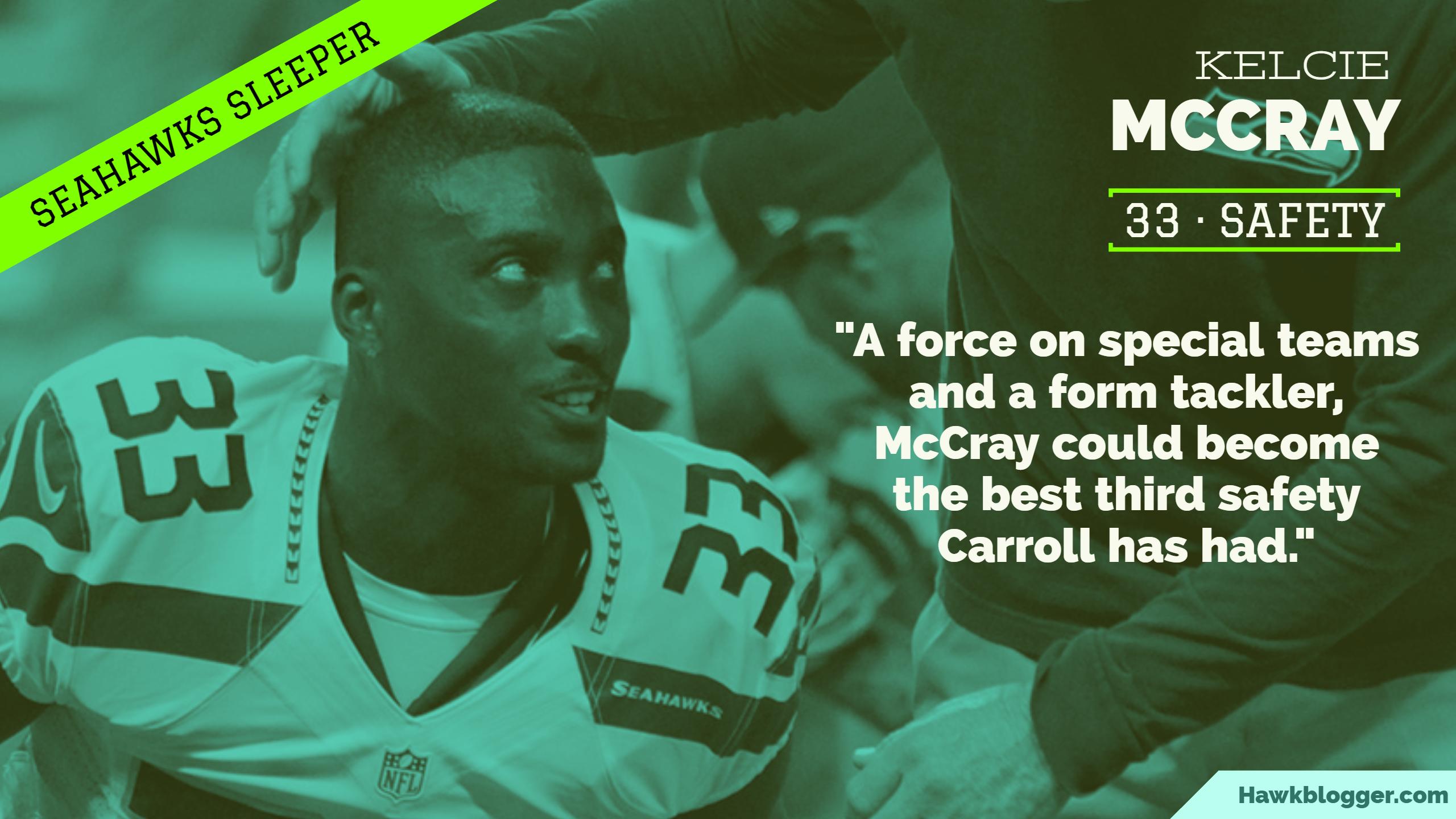 McCray was acquired via trade at the end of the preseason last year as the reality of Chancellor’s holdout sunk in. He was expected to be the starting safety opposite Earl Thomas for the whole year if need be. Chancellor returned after two games, but McCray still had a chance to make an impression due to injuries later in the year. In starts against the Browns and Rams, McCray totalled 18 tackles and earned the praise of Carroll.

The team feels very confident in what he brings to the table and will be looking for ways to get him on the field. A force on special teams and a form tackler, McCray could become the best third safety Carroll has had. Think back to the role Jeron Johnson played or even a guy like Jordan Babineaux back in the day. McCray could be that guy this year. 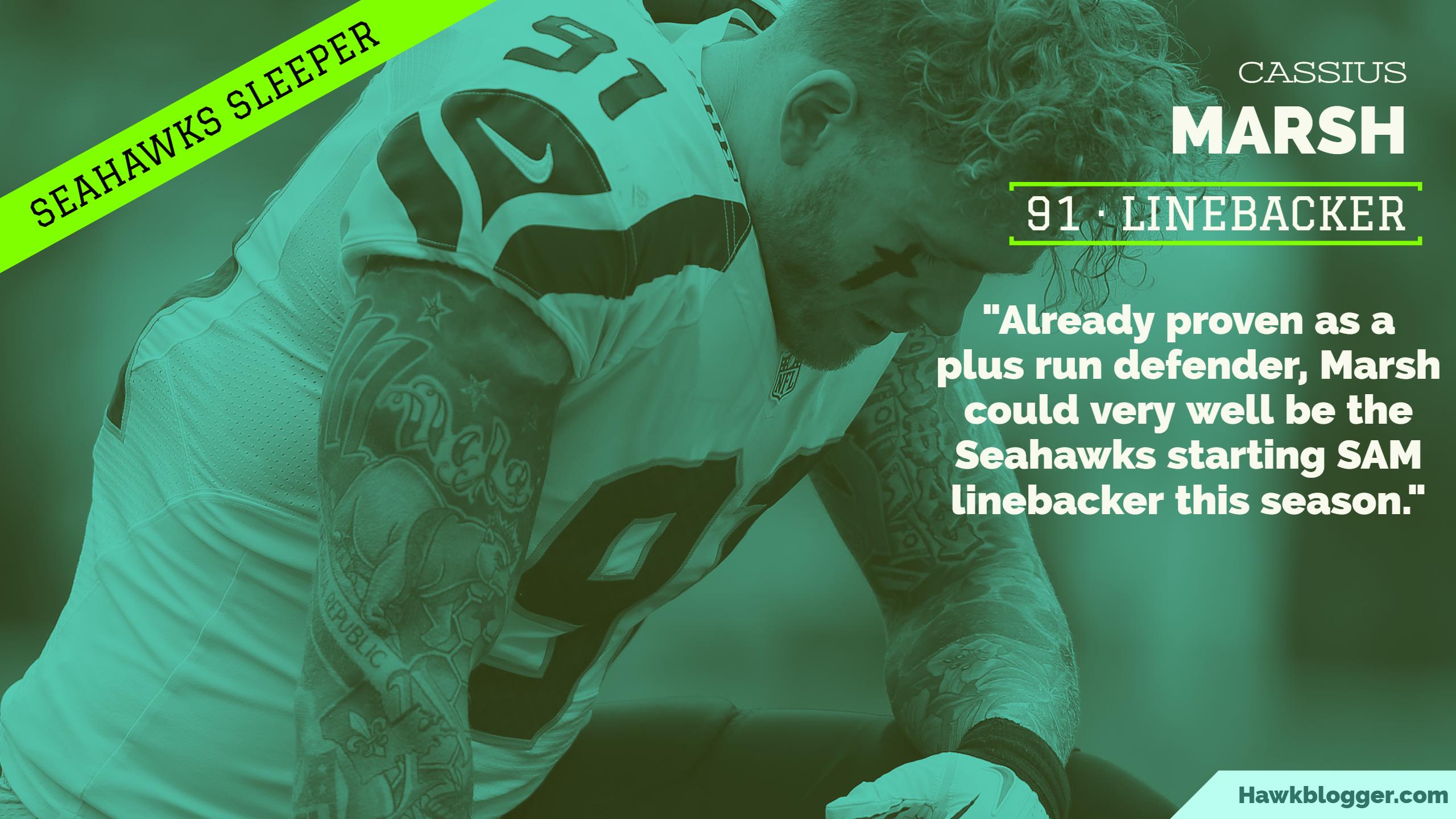 I am hesitant to hype Marsh given how much I have done so in the past two training camps. His motor is nonstop and he has a very good first step. The pass rush potential he shows in the preseason has yet to materialize in the regular season. You would think someone of his persistence would at least get some cleanup sacks. Two seasons in, and his career sack total is zero.

Many would jump to the “bust” label. Not so fast. Marsh has shown great potential as a run defender, including a memorable takedown of Adrian Peterson in the open field last season. People talk about Justin Britt starting at right tackle, then left guard, and now possibly center. Marsh followed a similar path, started as a pass-rushing defensive tackle, then dropped weight and moved to defensive end, and now is competing for a linebacker spot.

Already proven as a plus run defender, Marsh could very well be the Seahawks starting SAM linebacker this season. He has the strength to set the edge, and has some pass rush ability when needed. 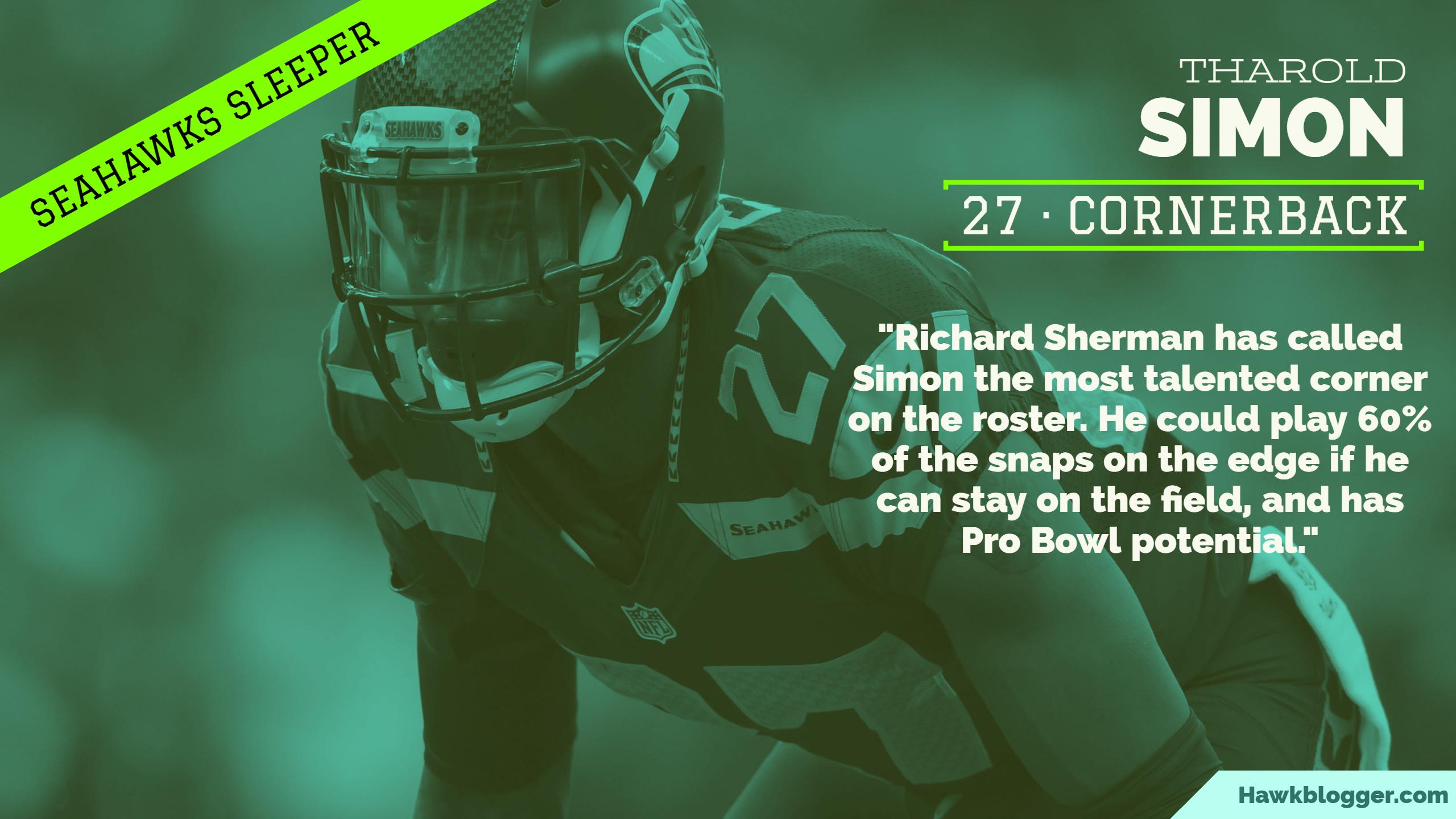 Hardcore Seahawks fans celebrated the Jeremy Lane signing as if he was the next great L.O.B. corner. Nothing against Lane, but the best bet for a new transcendent corner is Tharold Simon. Richard Sherman has calling Simon the most talented corner on the roster. He could play 60% of the snaps on the edge if the can stay on the field, and has Pro Bowl potential.

Lane likely starts in base packages, but will play inside in nickel and dime a lot. That leaves a heavy duty position ripe for the taking on the outside. Simon is the guy who I want to win that job because he could be a major difference maker. The problem for him has been durability. If he puts it all together this year—a contract year—the rest of the league will feel his impact. 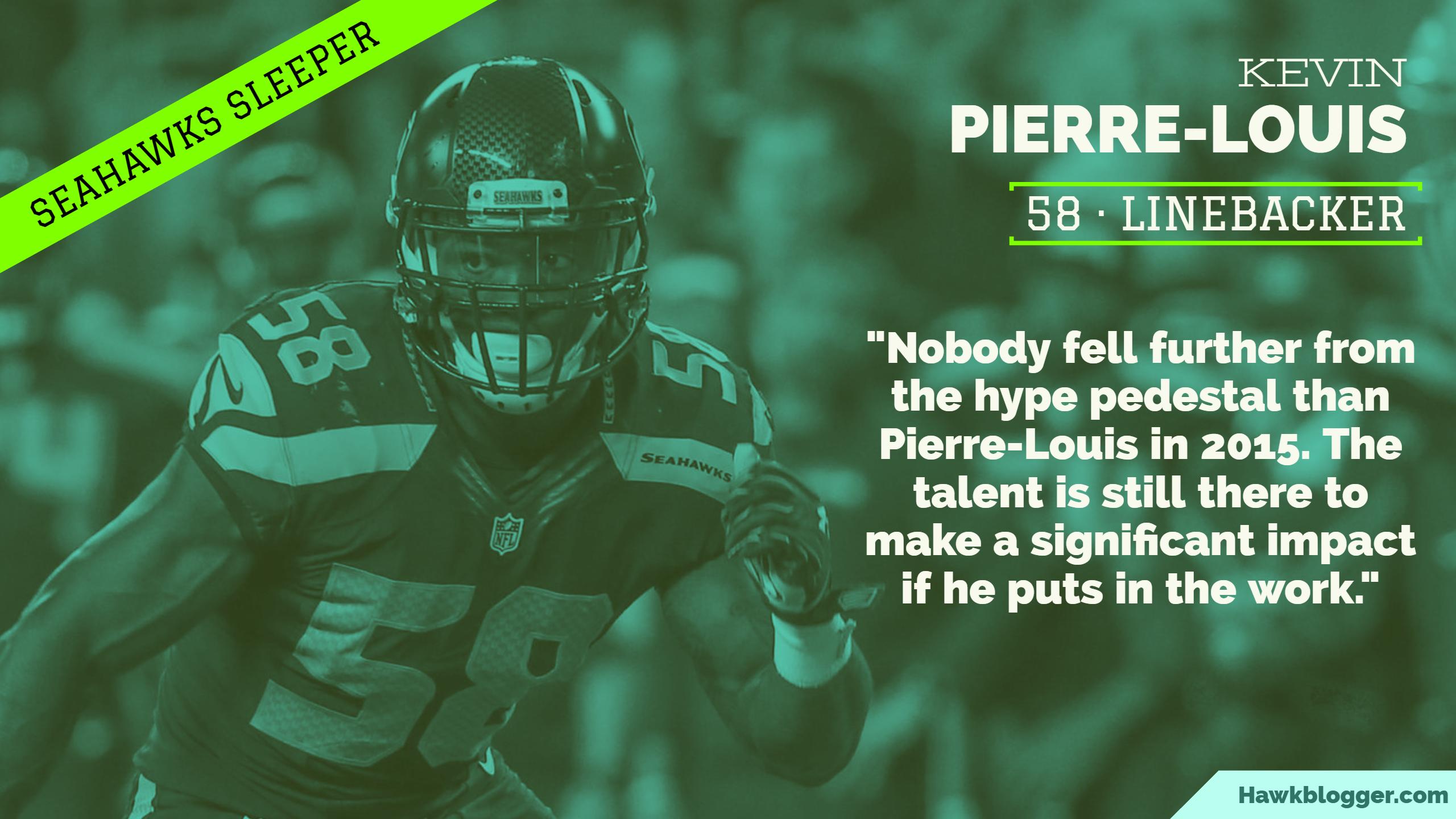 Nobody fell further from the hype pedestal than Pierre-Louis in 2015. The talent is still there to make a significant impact if he puts in the work. A Seahawks area scout infamously compared him to Navarro Bowman coming out of college. Then he flashed great speed and instincts in a few games as a rookie, before falling flat in a start last season and barely seeing the field thereafter. The coaching staff seems to handle him a little bit like Christine Michael. They acknowledge his talent and potential, but talk about it like he is not taking the steps necessary to realize that potential.

Bruce Irvin has moved on. Pierre-Louis is not the ideal build for the SAM linebacker spot, but he is competing for it. His job is to play well enough to force the coaches to find him snaps. His upside means that if he is seeing the field, fans should expect impressive production. 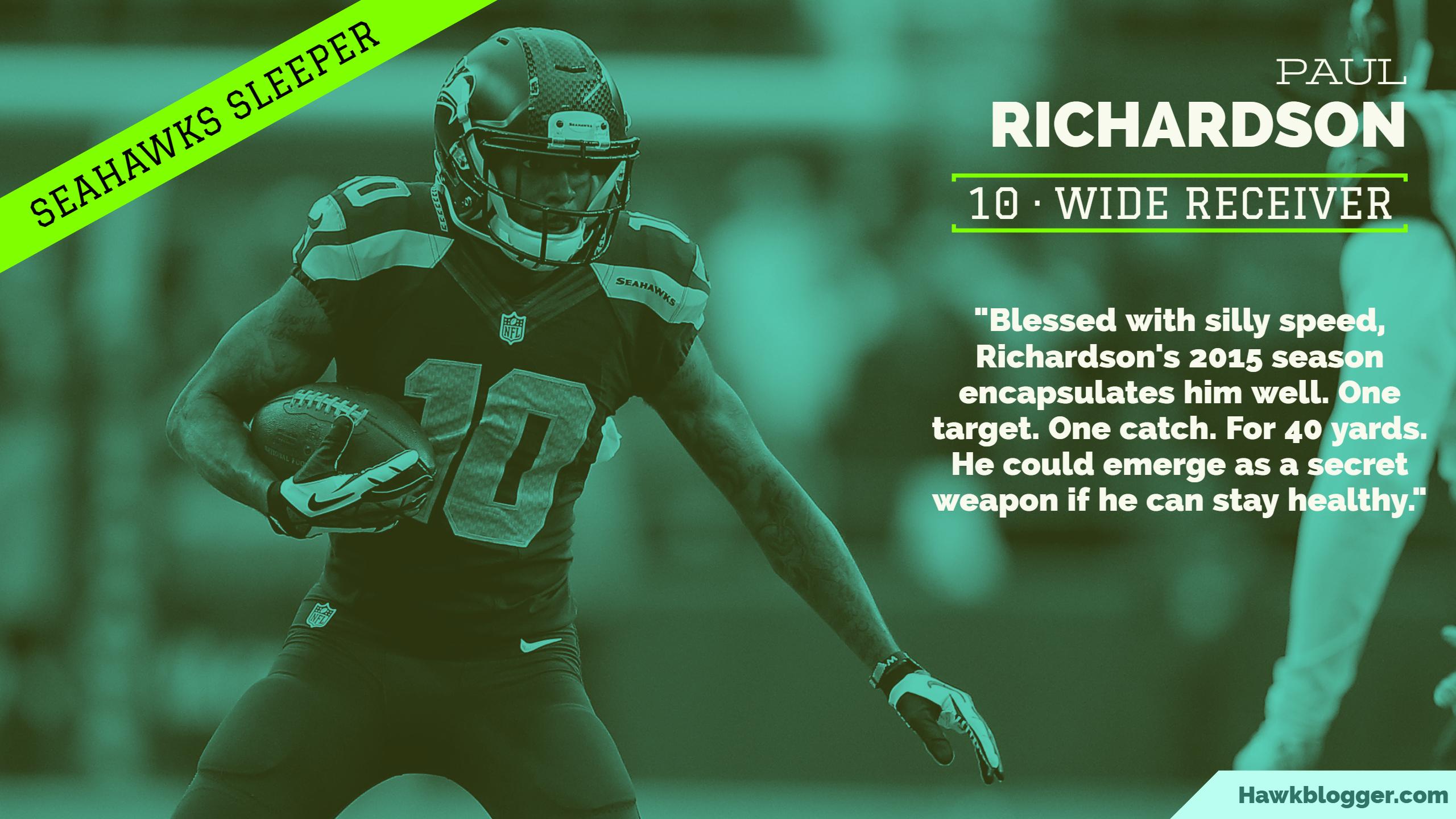 The Seahawks have Tyler Lockett, Doug Baldwin and Jermaine Kearse to hold down the primary roles in the Seahawks receiving corps. One of the most heated battles in training camp will happen right behind them. Anyone who watched Chris Matthews in the Super Bowl knows that a fourth receiver can be a difference maker. Paul Richardson was drafted in the second round and is a quality route runner with good hands. Blessed with silly speed, Richardson’s 2015 season encapsulates him well.

One target. One catch. For 40 yards. He could emerge as a secret weapon if he can stay healthy.

I was not particularly impressed with Richardson’s ability to high point a ball as a rookie. Wilson has been better able to work with deep targets who can outjump their competition for the ball. He has not shown as much chemistry with players who need to run away from their opponent. Think Joey Galloway versus Dez Bryant. Richardson will need to develop chemistry with Wilson on those “run under the ball” throws if he is to become an impact deep threat. His one catch last year was a perfect example of that. 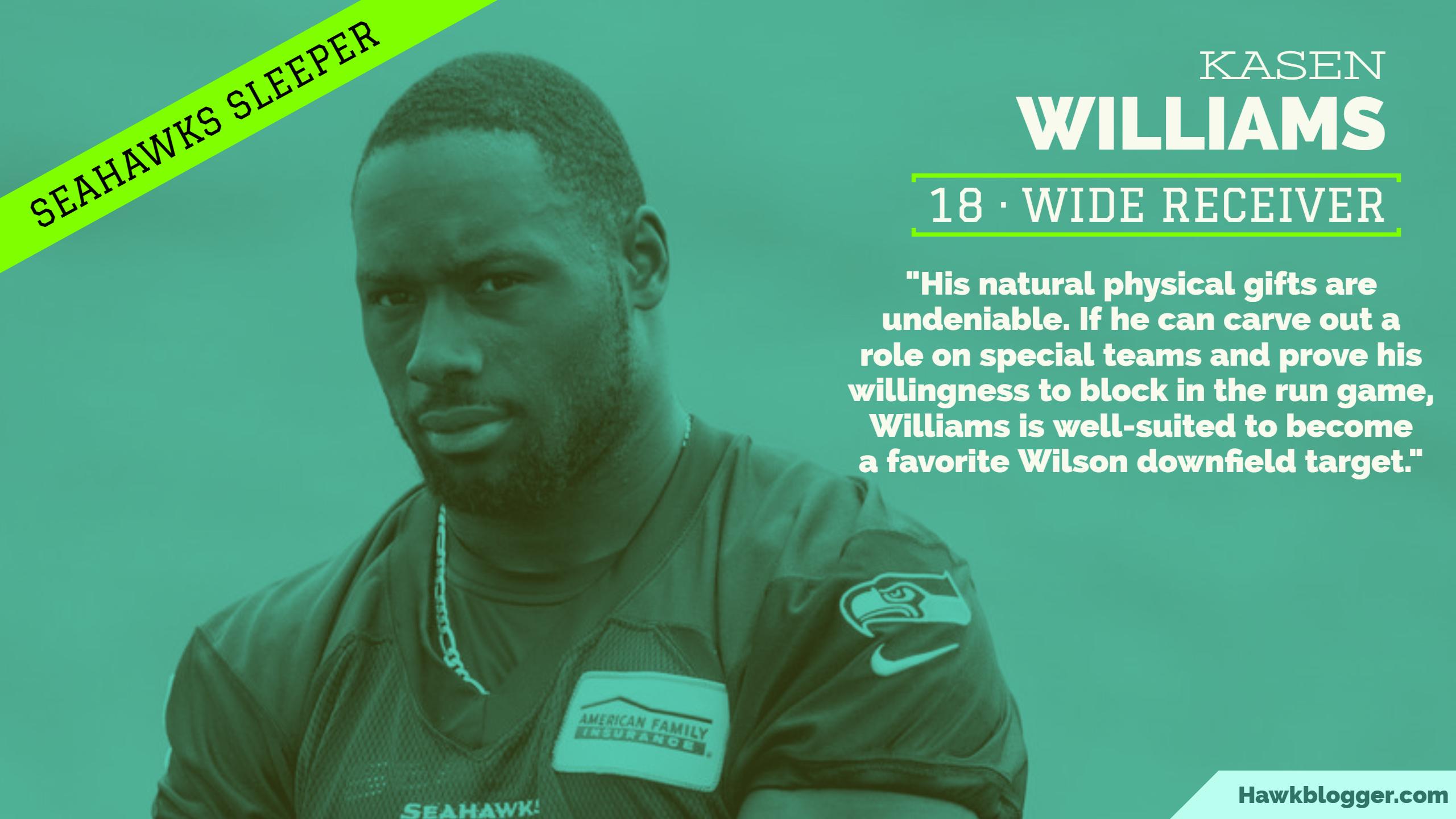 Williams is the yin to Richardson’s yang. What he lacks in sprinter’s speed, he makes up for in explosive leaping ability and strength. His natural gifts are undeniable. If he can carve out a role on special teams and prove his willingness to block in the run game, Williams is well-suited to become a favorite Wilson downfield target.

I could have just as easily picked fellow receiver Kevin Smith for this list, but Williams has unique physical traits that make his potential impact more intriguing. We have seen what damage a receiver can do with Wilson when they are effective at high-pointing the ball like Golden Tate or Matthews. Williams could be better than either of those players in that specific dimension of the position. Standing out on special teams will be key. 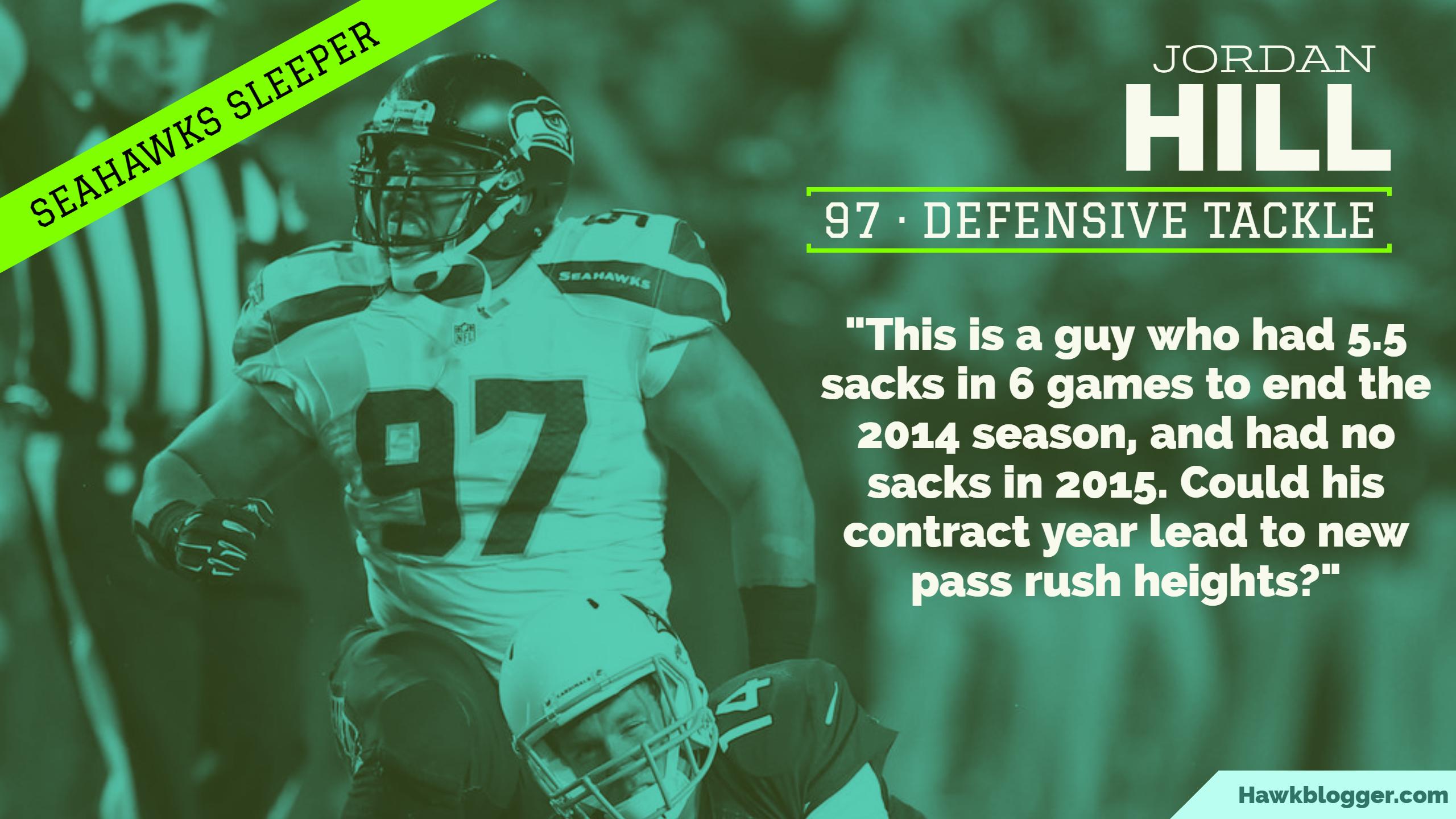 The enigma known as Jordan Hill. This is a guy who had 5.5 sacks in 6 games to end the 2014 season, and had no sacks in 2015. Could his contract year lead to new pass rush heights? We can certainly hope so.

Hill has had durability problems, but he had plenty of chances to make an impact last year in the pass rush and failed to do so. Frank Clark started stealing reps on the inside during pass rush situations toward the end of the season. Hill is a hard worker and is relentless in pursuit. He lacks dynamic strength or speed, but has above average quickness off the snap, and has decent hand skills. This may be a year where he goes silently into free agency, or it could be big payday waiting to happen should he find his pass rush prowess again. Seattle would be in terrific shape if Hill can get 5 or more sacks again. 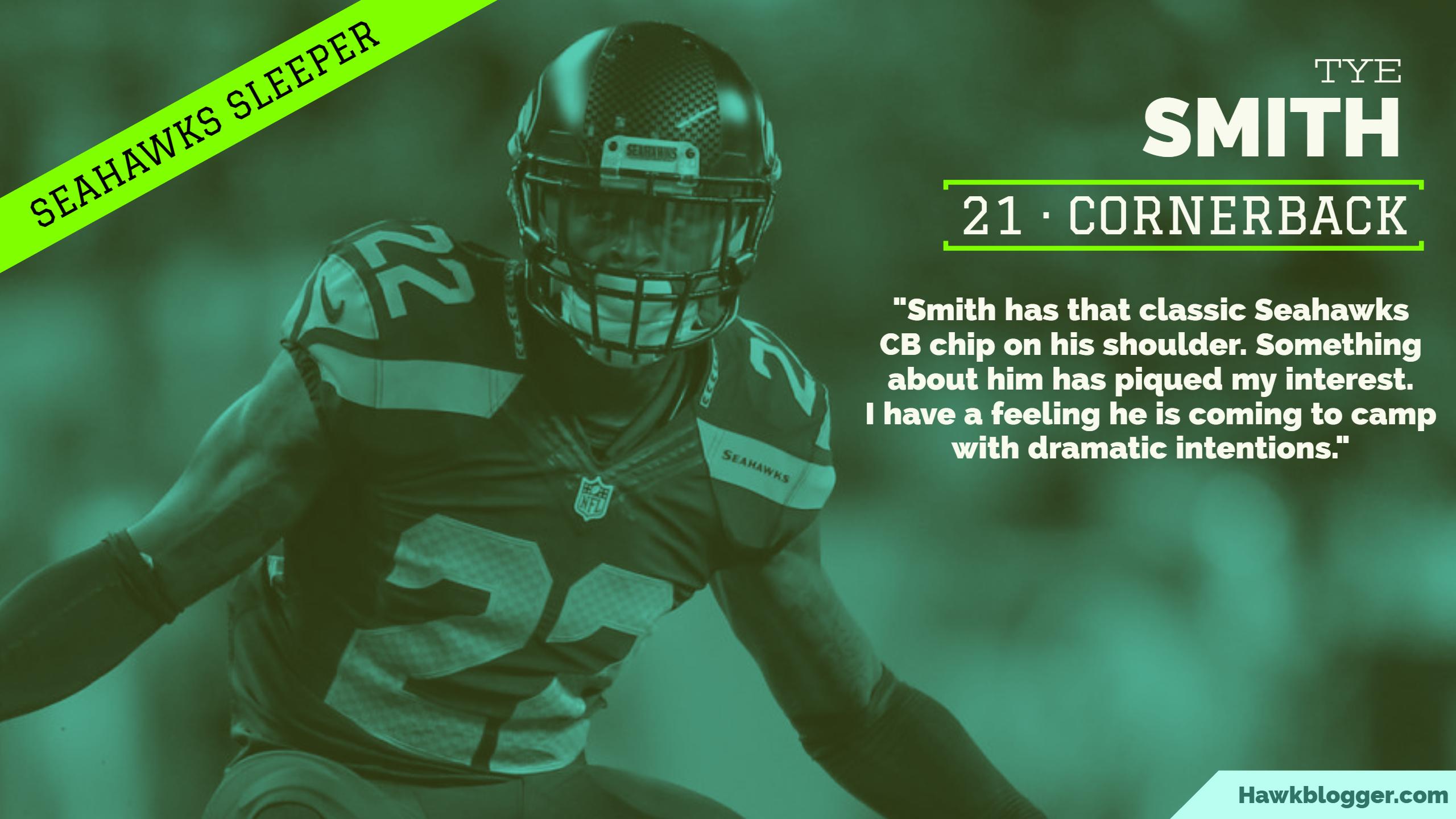 I walked up to Tye Smith at a recent charity event and handed him payment for an autograph. Not all players charge equally at this venue, with guys like Wilson and Sherman commanding top dollar. Smith was hangin out with TE Ronnie Shields and S Robert Smith. I didn’t particularly want any of their autographs, but I enjoy talking with the guys who nobody else shows interest in. Well, Smith was having none of my offer for the autograph. He wanted double what I was offering.

I smiled broadly and joked, “You’ve got to see the field to get that kind of dough.”

Shields and Smith laughed and started hollering, “Ooooh!” Smith was not pleased. He turned his back with a bit of grin and said, “You see,” speaking to noone in particular. “That’s what I’m talking about. I’m going to get my respect.”

It might have rubbed some people the wrong way. It made me a fan. Smith has that classic Seahawks CB chip on his shoulder. Something about him has piqued my interest. I have a feeling he is coming to camp with dramatic intentions.

Where he fits is not clear. He was overmatched last training camp inside or out. He projects more to the inside, but may benefit from the sideline by working on the edge. Simon is in the last year of his deal. There very well be room for a guy like Smith to step forward, and up his asking autograph asking price. 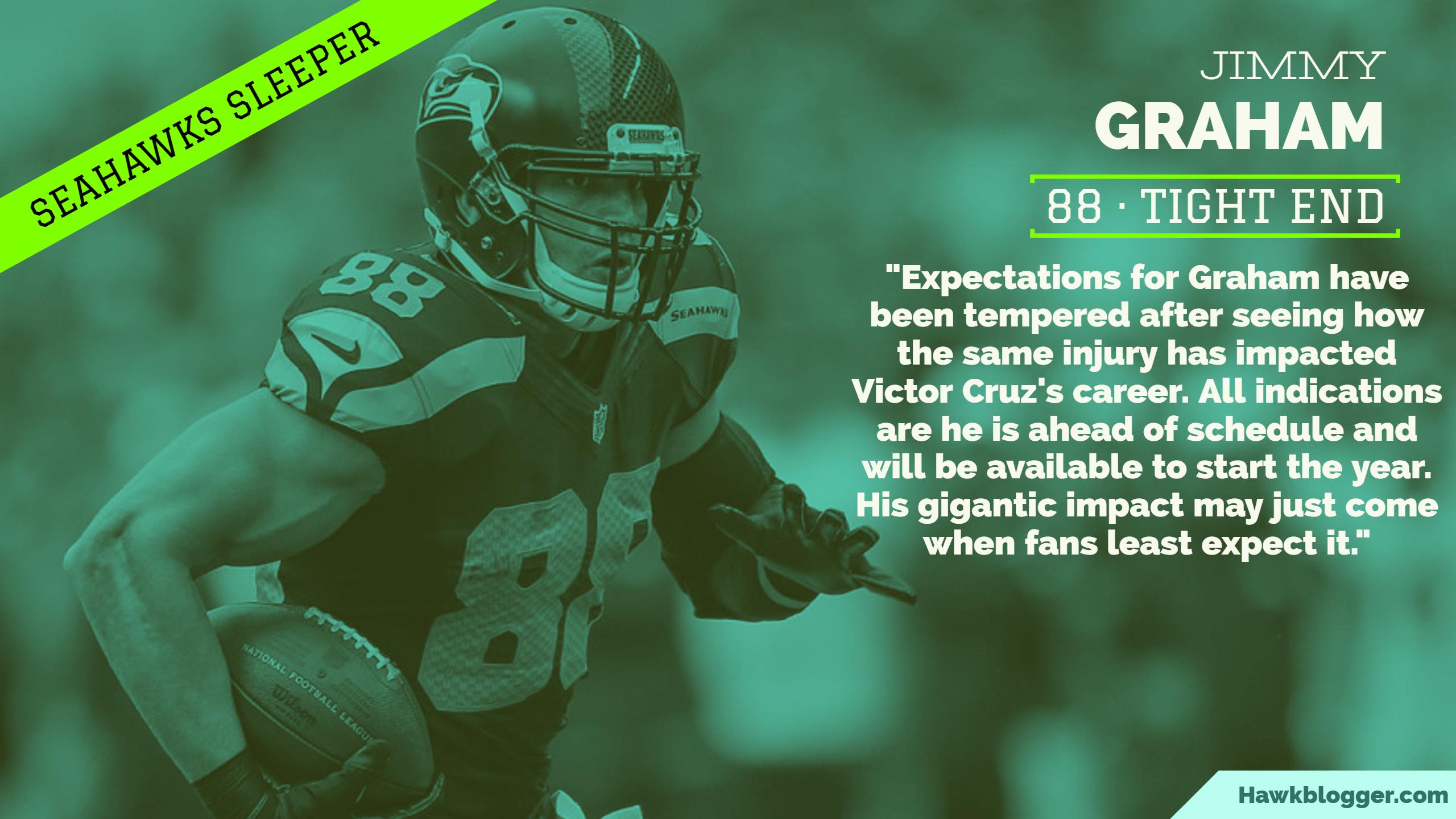 You may question Graham’s inclusion in a sleeper list. The guy has been an all-world tight end and came to Seattle in a blockbuster trade. Expectations for Graham have been tempered after seeing how the same injury has impacted Victor Cruz’s career. All indications are he is ahead of schedule and will be available to start the year. His gigantic impact may just come when fans least expect it.

People saw how the offense took off in the second half of the season. All eyes are on Wilson, and Baldwin, and Thomas Rawls, and Lockett. Nobody is counting on Graham this season. That should scare the heck out of opposing defenses. The addition of TE Nick Vannett is meant to give Graham the freedom to move off the line and focus on running routes instead of blocking. Lockett and Baldwin are becoming one of the NFL’s most devastating combination route runners. Put Graham on the other side, and defensive coordinators will be left to pick their poison. Oh, and don’t forget that stable of running backs going up the middle.

Graham has never been a complimentary player. He can be this year, and possibly have a greater impact than he did last season. Accepting his role on a great team may be an adjustment for him. Seattle will gladly welcome an adjusting Jimmy Graham if it means getting him back to start the season.