The Seahawks trimmed their roster to 75 players yesterday. Some players were cut, while others were either placed on Injured Reserve or waived as injured. The only mild surprise was Brandon Browner, who Pete Carroll had spoken positively about in terms of his hybrid role. Browner’s lack of fit as a true safety wound up being his undoing. Below are my updated roster projections for the final 53 based on where things stand today. 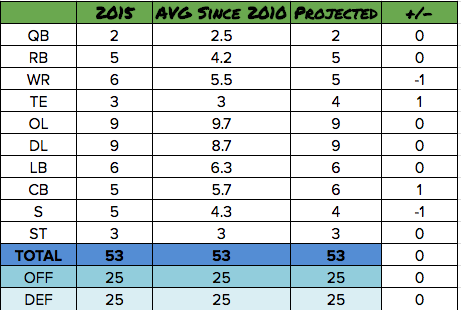 I continue to vacillate between keeping an extra safety or an extra corner. That’s the main point of debate as things stand.

Trevone Boykin is the guy, unless he isn’t. That does not mean Jake Heaps has a shot. There is a chance that the team signs a more seasoned backup and stashes Boykin on the practice squad.

This group looks loaded and set. Troymaine Pope is a great story, but will not make the team. There is some chance the team could let Alex Collins go in favor of keeping an extra player somewhere else on the roster, but if they keep five backs, he will be one of them.

No position is more precarious heading into the final preseason game than the fifth wide receiver spot. I could easily see any of the guys listed as on the bubble as getting the job. Coaches have been talking a lot about Tanner McEvoy, who also plays tight end, but I’m sticking with Kasen Williams for now.

Patrick Lewis is gone. I’ve had Joey Hunt as the backup center for weeks, so no shock there. I am sticking with Will Pericak as the final linemen based on his youth, cost, and flexibility to also play center. George Fant is a perfect practice squad candidate.

Sealver Siliga was moved to IR. Tony McDaniel and Quinton Jefferson are pretty close to locks. The questions are around Jordan Hill and Ryan Robinson. Hill likely makes the team as the rush nickel nose tackle. If the team can find someone they like better on the waiver wire or trade, I would not be surprised to see him moved. Robinson has done little to stand out in the preseason, but neither has Brandin Bryant. That spot could very easily go to a player not currently on the roster.

Morgan has been moved to a lock after nobody was able to unseat him. Kevin Pierre-Louis could be in some trouble if the team finds someone else they like better.

Despite the odd infatuation with Tye Smith among some Seahawks fans, I still see Marcus Burley as the better corner, better special teamer, and more valuable player. If they go with just five corners, Smith would be the guy they show the door to.

Most people have Tyvis Powell making it, and that would not be a shock in the least. I have Steven Terrell over him due to his unique speed and ability to spell Earl Thomas.

Nolan Freese is the guy for now. It sure seems like they should invest in an upgrade here.