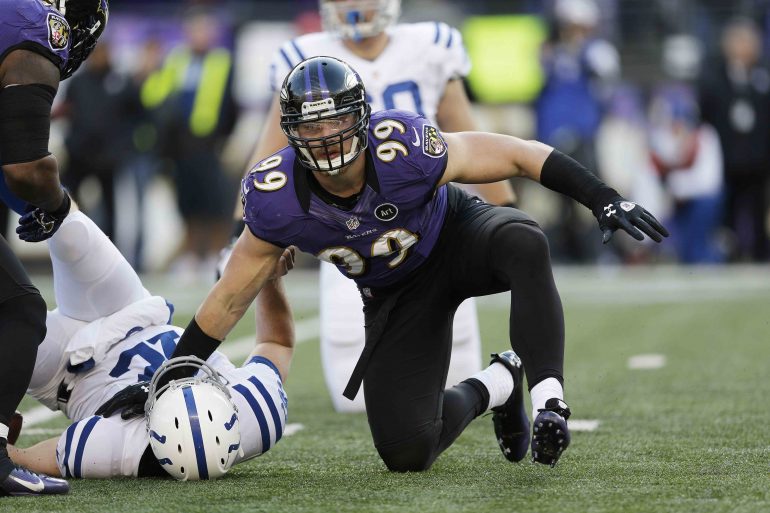 FILE - In this jan. 6, 2013, file photo, Baltimore Ravens outside linebacker Paul Kruger (99) looks up after sacking Indianapolis Colts quarterback Andrew Luck during the second half of an NFL wild card playoff football game in Baltimore. The Cleveland Browns reached agreement on Tuesday, March 12, 2013, with Kruger, who led the Ravens in sacks last season, a person familiar with the agreement told The Associated Press. (AP Photo/Patrick Semansky, File)

Seahawks May Still Add to Roster Via Trade or Waiver Wire

This is a very deep Seahawks roster. They have more running backs than ever, more quality safeties and corners than they will be able to keep, and surprisingly, an abundance of valuable offensive linemen. As has become customary the last few seasons, players cut from the Seahawks roster will find their way into prominent roles for other teams. Less discussed is the river that flows in the opposite direction. John Schneider and Pete Carroll have never been afraid to add a player from another team’s roster late in camp either through trade or by scouring the waiver wire. There are a few spots that are more likely than others to be targeted for new blood in the next week.

There has not been a ton of evidence that the Seahawks have improved their pass rush this offseason. Much rests on the shoulders of second year pro Frank Clark. Cassius Marsh has shown flashes, but he and Clark enter the season with a combined total of 3 sacks in their careers. Jordan Hill has once again been injured, and has not made an impact when he has been on the field. Ryan Robinson was talked about a lot, but has yet to do much this preseason.

Paul Kruger was recently cut by the Browns, and has 11.0 sacks just two seasons ago. He is too big at 270 lbs to take over the SAM LB spot that Bruce Irvin played, but he could be interesting as a situational pass rusher. Teams like the Rams are stacked at the defensive line spot and will be letting guys go who could be intriguing for Seattle. The Bengals, Bills, and Jets may have some castoffs that interest Seattle as well.

The big SAM LB competition to replace Bruce Irvin never really materialized once preseason games began. Mike Morgan has that spot after Marsh and Eric Pinkins failed to truly push him. Morgan is a good special teams player and just an okay linebacker. He was signed as insurance so the coaching staff knew they had someone on the roster who knew the system. It would not surprise me to see them reach beyond the roster to try and find someone with more upside.

Kevin Pierre-Louis has also had a ho-hum camp. He is a big part of special teams, but that’s not enough to protect him if the team sees another player they like better come available. He might be a viable trade candidate given he has some good tape from his rookie season and is extremely athletic. Some team could decide a change of scenery would get the most out of him.

It is clear that Trevone Boykin is the backup quarterback for the Seahawks on this roster. What is not clear is whether the team is committed to him as the backup no matter what other player becomes available. Boykin is a guy who could be developed on the practice squad without a lot of risk that other teams would snap him up. His value is higher to Seattle due to their style of play. The Chiefs have five quarterbacks. The Jets have a long list. It would not be a shock if the Seahawks signed a guy like Aaron Murray and moved Boykin to the practice squad. Not likely, but not a shock.

The team can’t be happy with the state of their long snapping. It seems a near certainty that they will explore more options as they become available.