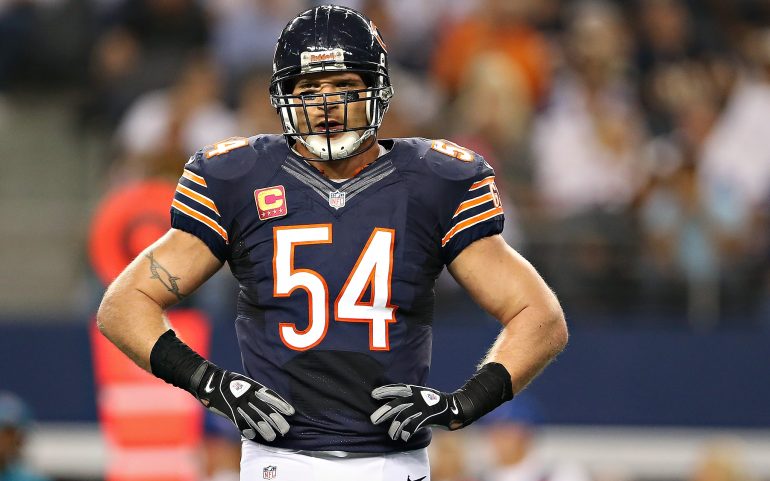 What Do Cassius Marsh & Brian Urlacher Have In Common?

Seattle drafted Cassius Marsh with the 8th pick of the 4th round of the 2014 NFL draft. He had played defensive tackle and defensive end for UCLA, and varied his weight from 252 lbs to nearly 300 lbs depending on his coaches requests. The Seahawks saw a player who had a great motor and the versatility they craved in their linemen. They asked him to play at around 275 lbs that year with the idea he would rush from the inside. Two years later, the team has moved him to linebacker, and remarkably, he looks natural doing it. So much so that I found myself wondering if I had seen a player of his body type succeed at the linebacker position. One prominent name came to mind.

Marsh is not Brian Urlacher

Before you start screaming at your screen, let me take a second to say I am not saying Marsh will be anything like Brian Urlacher as a player or even play the same linebacker role. Urlacher came to mind because Marsh is similarly built and moves surprisingly well in space like the former Bears linebacker did. I took a note on Monday to check out just how alike the two were in terms of measureables. Urlacher was clearly a superior athlete. He had played safety in college, so the question was much more about his ability to step up to a linebacker role versus Marsh stepping back from a defensive line spot. Urlacher was considerably faster and stronger than Marsh. Although, it would not surprise me if Marsh has greatly improve those bench press numbers after a couple years in the Seahawks training program.

The two are very similar in height and weight, and in initial burst (10 yard dash). My eyes didn’t lie when thinking they seemed to share body styles.

The Seahawks are not asking Marsh to play middle linebacker the way Urlacher did. He is being tested as a SAM linebacker near the line of scrimmage, with primary responsibilities being more about setting the edge against the run and bodying up tight ends.

Still, Marsh will need to operate in space for zone coverages and tackling running backs in the flat on swing passes if he is to succeed at linebacker.

Seahawks defensive coordinator Kris Richard said after practice on Thursday that it was Marsh’s play on special teams that tipped the coaching staff off to the possibility that he could play linebacker.

“[Marsh] is a fine athlete, and he’s proven that consistently playing on special teams,” Richard said. “Seeing a guy of that nature being able to contribute consistently on special teams where the game is all about space, you would think that transition [to linebacker] would be natural for him.”

Seattle coaches are known for identifying the strengths of a player and putting them in a position to maximize those strengths. Marsh was not going to stand out as a defensive tackle. His contributions at defensive end have been muted in the pass rush. I think they see a chance for Marsh to be a unique SAM linebacker as opposed to just another defensive end. If you look at his athletic profile, you can see why they would feel that way.

Marsh compared to other defensive ends

Marsh compared to other outside linebackers What you see is a player who is among the smaller defensive ends with limited explosive scores versus a uniquely large linebacker with better-than-average arm length to fight off blocks and reasonable agility scores.

There is little evidence to suggest Marsh will become a high impact player, let alone become a Hall of Famer like Urlacher. There is, however, mounting evidence that he may end up being a better linebacker than a defensive lineman.