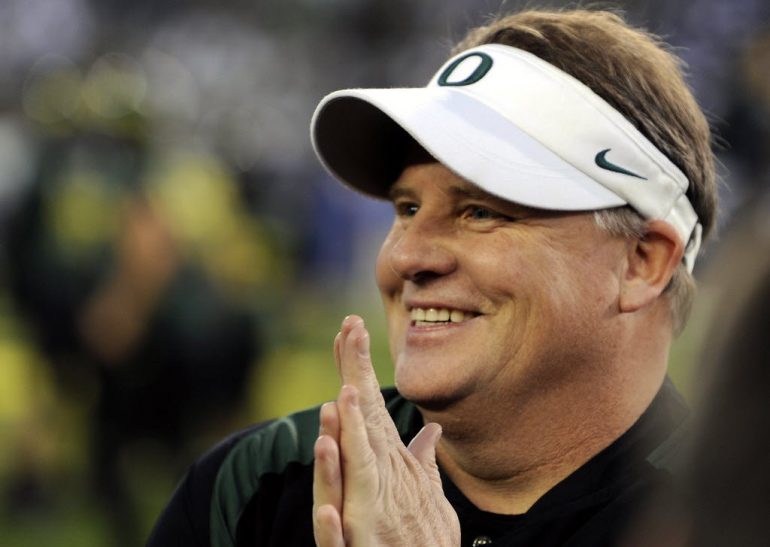 There were few concerns about the Seahawks defense this offseason. Coming off it’s fourth straight year leading the NFL in points allowed, Seattle returned all but two starters. One of those starters was Bruce Irvin, an athletic monster that Seattle selected 15th overall and had been Seattle’s starting SAM linebacker the past 3 years. How Seattle would replace Irvin was maybe the biggest question for the defense. The question was ultimately answered through inaction, with Seattle returning Mike Morgan and bringing in little competition outside of a few UDFA linebackers that failed to make the team.

In Morgan’s limited playing time he’s shown to be a capable at taking on blocks, setting the edge, and generally playing the run well enough to allow Bobby and KJ and Kam to do their thing. If there has been one question about him it’s been his ability in coverage. The Seahawks’ coaching staff mitigates these concerns by playing him at SAM and taking him off the field in nickel. Jeff Fisher and the Rams, however, found a different way to attack this weakness. 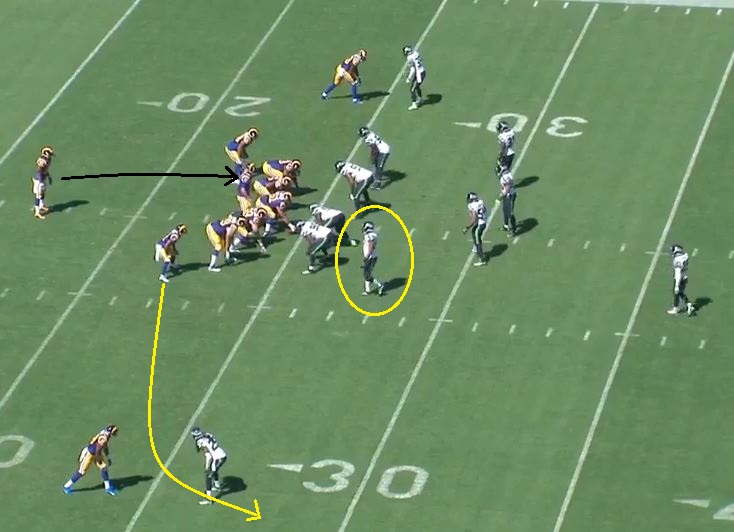 Los Angeles lines up in 11 personnel with Tavon Austin lined up tight on the right side. At the snap, Morgan reads the play action as Tavon slips into the flat to run a wheel route. 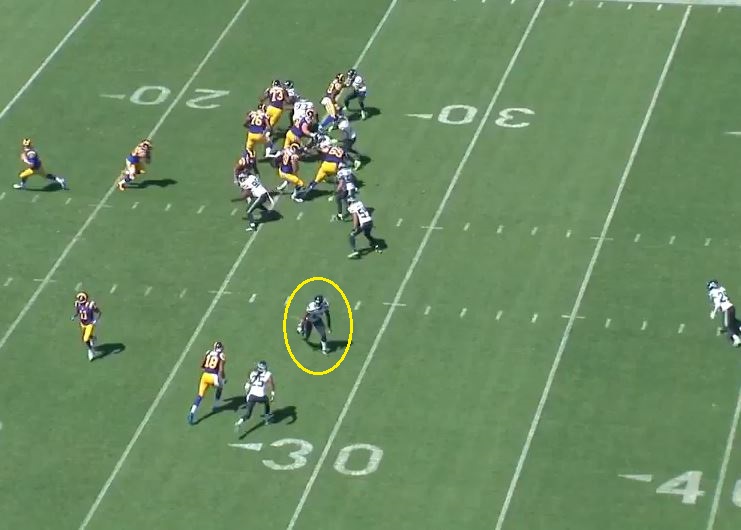 Except that it’s not play action at all. Keenum has handed off to Gurley, who now has one less defender in the box. Fortunately KJ Wright and Jarran Reed both win their matchups and Gurley is held to a gain of 4.

Here the Rams line up in 12 personnel with twins tight. Higbee, lined up widest, motions before the snap to the right side. This time, at the snap, Cook slips out into the flat with Brian Quick passing Morgan to get out on the safety. 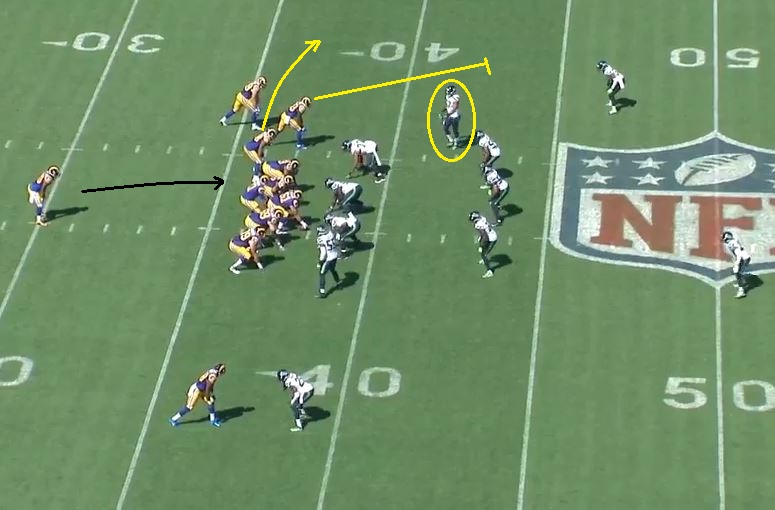 Morgan again read the play-action-that-isn’t, chasing Cook away from the play and leaving Bobby Wagner on an island against Todd Gurley. 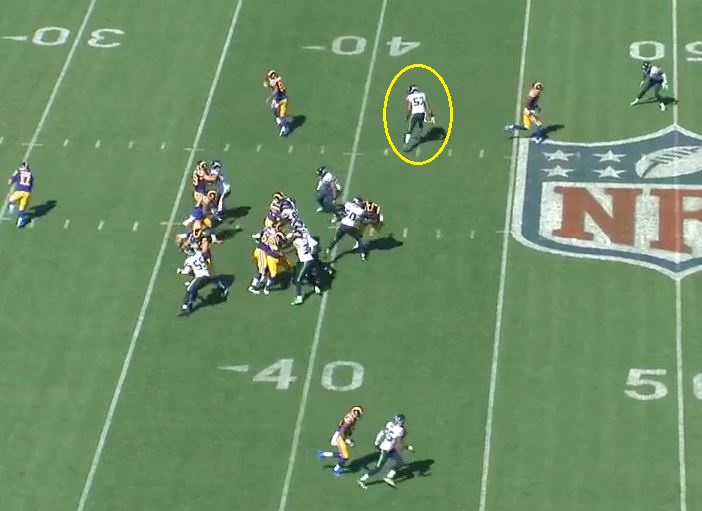 Wagner is able to make the tackle and hold Gurley to a gain of 3, but needless to say this puts a lot of pressure on your linebacker. Making a play in space against one of the better running backs in the league is a tough assignment. And against San Francisco, Seattle can expect Chip Kelly to crank that pressure all the way to 11.

Kelly has built his reputation, in large part, off of his creativity with read option plays. Seahawks fans are pretty familiar with the read option at this point. Seattle has had considerable success leaving the defensive end unblocked for Russell Wilson to read, either handing off to the running back or keeping the ball and picking up yards himself. Something Seattle fans have seen less of, however, the QB reading the defensive tackle instead of the defensive end. 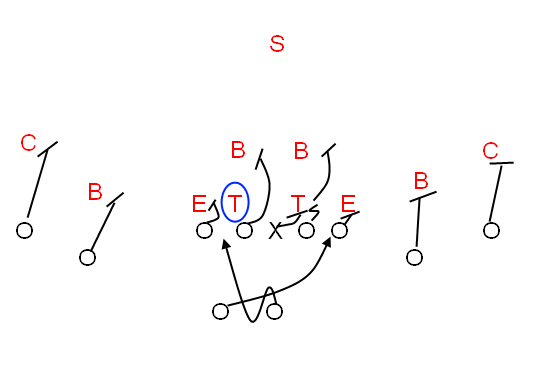 That diagram comes from the amazing Chris Brown. Brown wrote about Oregon’s use of this play under, you guessed it, Chip Kelly. It’s a variation of the read option that Kelly has brought with him to the NFL and ran against Carolina just last week.

Imagine the play above but, instead of Wagner, the Niners leave Jarran Reed unblocked against Carlos Hyde. It’s a scary thought, especially if the tight end sells his route and Morgan turns his back to the play.

Pete Carroll and co. will of course be ready for this, but defending these plays with a subpackage heavy defense against a up tempo offense will be a challenge. Hyde is a dangerous runner and Gabbert is an athletic quarterback. Both are capable of exploiting a mistake for a big gain. If Seattle’s offense is unable to muster a better performance than they have the previous two weeks, Kelly may only need to engineer a few big plays to keep the Niners in the game.