The Morning After: Seahawks Find Their Altitude, Leave 49ers Below Them, 37-18

Take a hike in the Cascades during the fall and you will likely experience moments of clear sight and tranquility, alternating with moments of fog and uncertainty about what is coming next. Welcome to the Seahawks 2016 season. The joy of a blowout victory that few saw coming after two weeks of offensive futility and injury, was at least partially dampened by the twisting knee of Russell Wilson. Players like Doug Baldwin, Tyler Lockett, and Wilson played courageously and productively through injuries that might have kept others from the field, while key contributors like Thomas Rawls, Germain Ifedi and C.J. Prosise were unable to suit up. That this team was able to finally play to their standards despite their injured state speaks to the grit that has defined them through the years. They will need it, as this season is shaping up to be a test of will as much as a test of talent.

There is an unfortunate reality in life that unless you make people aware of an injury, nobody gives you much credit for playing through it. Both Baldwin and Lockett had plenty of reason to miss this game. They were in bad shape after that Rams loss. Yet, both insisted on getting on the field and both contributed significantly to the victory. Baldwin, especially, had a remarkable day that moves into the inspiring category when you take into account his health.

There were at least a few whispers after Seattle inked Baldwin to a big contract this offseason from those who wondered if his historic run through the end of last season was a fluke and the Seahawks were buying high. Those folks might be surprised to hear that Baldwin has actually increased his production so far this season even when compared to that hot stretch.

He is on pace for 107 catches, 1,472 yards and 11 touchdowns this year. His performance over the last eleven regular season games is nothing short of elite. 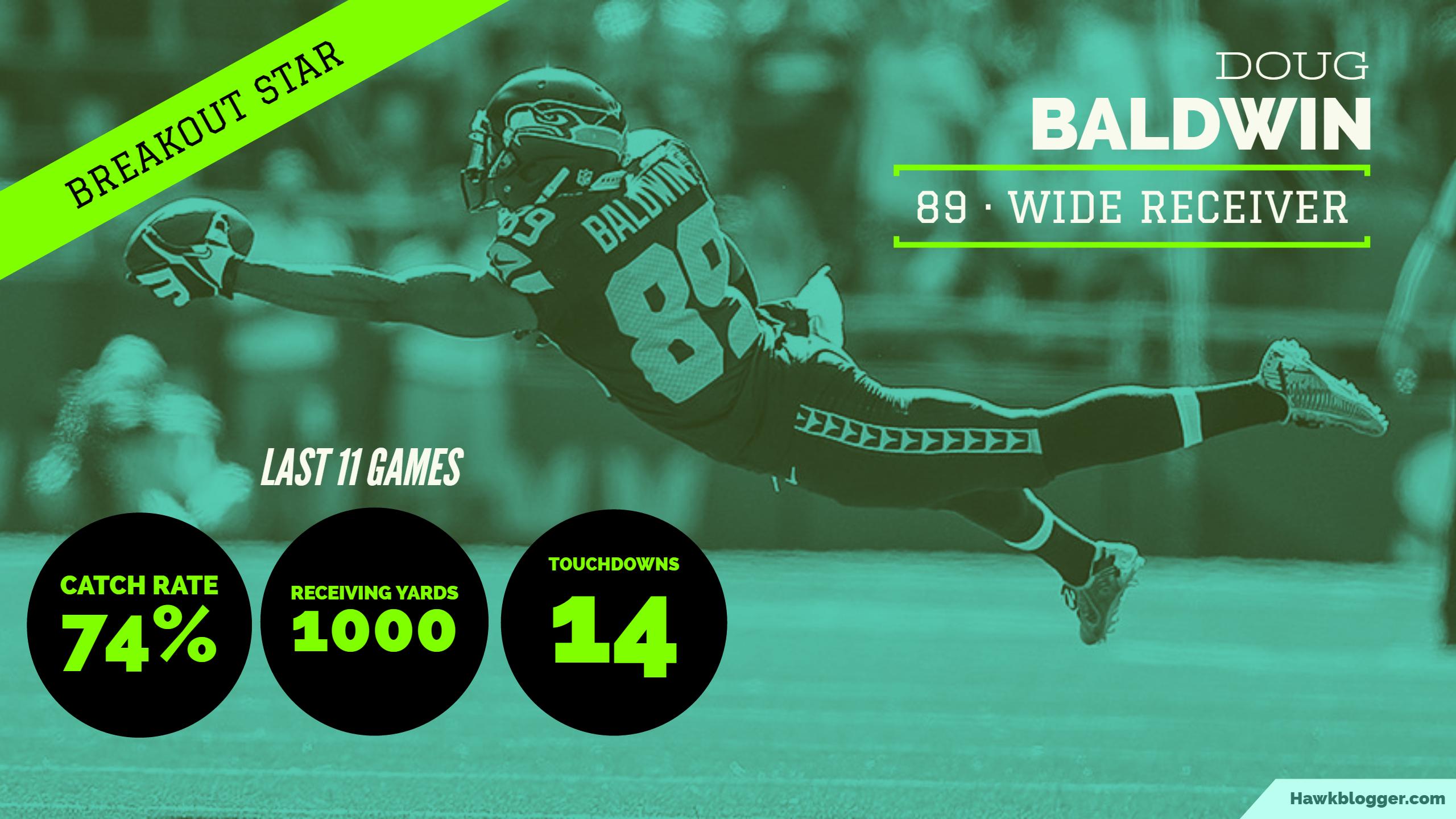 ProFootballFocus.com has Baldwin graded as the third best receiver in the NFL through three weeks. Teams will increasingly try to take Baldwin out of the game with double coverage. That should allow other players like Lockett, Jermaine Kearse, and Paul Richardson to step up.

The biggest adjustment in the passing game from the first two weeks to this week was a clear intention to involve Jimmy Graham. Wilson targeted Graham three times on the team’s second drive, resulting in 30 yards and big conversion on 3rd and 15 that keyed an eventual touchdown. It cannot be stressed enough how valuable Graham can be if he can stay healthy. Nobody should assume that will happen, but he has defied the odds so far.

Devising coverage schemes for the Seahawks is much simpler when the deep middle is not threatened by a 6’7″ athletic target like Graham. The Rams bracketed both Baldwin and Kearse last week when Lockett went down. Bevell never adjusted to feature Graham, but did so this week and it cleared the way for the Seahawks to have a 100 yard receiver and 100 yard tight end for the first time since 2014 when Luke Willson and Baldwin accomplished the feat versus the Cardinals in Arizona.

The true unlocking of the passing game will come when Lockett returns to health, along with Wilson. Seattle will be able to dictate coverages with their alignments and put defenses in more predictable situations. This was a great step in that direction.

The score of this game was 37-3 early in the fourth quarter. San Francisco was 0-10 on third down conversions. They had roughly 130 yards of total offense. It was absolute dominance. Chip Kelly’s system has proven to be helpless against Pete Carroll’s system so far in the NFL. That Eagles team came into a game against the Seahawks a couple years ago with similar high-flying offensive numbers only to leave the game wrecked.

There were plenty of calls on Twitter for a different quarterback. That may have made a small difference. The real problem is that Kelly has a predictable system that at least partially relies on the defense making mistakes either through lack of discipline or exhaustion. It also benefits from teams who get caught with the wrong personnel on the field. Seattle is so talented and experienced on defense, and know their system so well, there are few holes to exploit.

Blaine Gabbert repeatedly took the underneath options and the Seahawks had a terrific day tackling. Carlos Hyde, who finished with a misleading total of over 100 yards rushing and 2 touchdowns, had less than 40 yards on the ground early in the fourth quarter. The Seahawks run defense was stellar until the final two possessions. The two touchdowns they surrendered in garbage time cost them the top spot in the NFL points per game ranking as the Eagles snuck into first. Seattle remains the top-ranked yards allowed defense.

What may have been most remarkable about this defensive dominance is that it came with only two quarterback hits and no sacks. There were not a lot of big plays. It was just reliable execution and sound fundamentals. This was the type of defensive game you marry, not the one you notice across the room.

Kam Chancellor had a punishing game, knocking out two 49er tight ends and making Vernon Davis thankful he was no longer occupying the same field as the Seahawks safety. It must be something about that San Francisco red that turns Chancellor into a goring bull.

Bobby Wagner had his third fine game in a row, highlighted by the team’s first takeaway on the season when he caught a tipped pass for an interception.

Opposing offenses are now just 10-40 (25%) trying to convert third downs against the Seahawks defense, the lowest number in the NFL

This defense is playing with a quiet confidence that should have fans excited. This very well may be the best defense in football again, and better than the versions run out the last two years. The offense only needs to be average to win a lot of games with a defense playing at this level. When the offense plays at a high level, the defense gets more rest and gets to be more aggressive and the result is what we saw in this game.

Running back Christine Michael took his first carry 41 yards for a touchdown without being touched by a defender. Michael is now second in the NFC in rushing yards and first in yards per carry at over 5.3 (minimum 25 attempts). Wilson was sacked twice, both on plays where he had plenty of time to throw the ball away. Seattle has given up just a 5.98% sack rate through three games, which ranks 19th in the NFL, after sitting at 8.6% and 28th last season. To draw an even more stark comparison, consider that the Seahawks opponent sack rate was 13.2% through the first eight games of last year, and that included a game where the Cowboys recorded no sacks.

It is fine to want more and better. The total lack of recognition for the progress this line has shown in comparison to where the team was last year needs to stop. Let me take that back. People can point the finger at the line all they want. They should just know they are on the wrong side of this thing, and when it truly turns, they will be the ones stuck picking apart 37 point performances to justify their skepticism.

Germain Ifedi may be back this week, and that would be great news. He is not a savior, but he is certainly a better player than J’Marcus Webb. More likely, the team will give him the bye week to fully heal and get his first start at home instead of on the road.

This game against the Jets represents a similar test to what this line faced in the first two weeks of the season. Their defensive line talent is dominant. The play of the Seahawks offensive line in the run game versus the 49ers provides new hope that they will be ready for that challenge. It is not realistic or fair to expect this group to dominate the Jets the way they dominated the 49ers. The goal will be to take some of this success and build on it against a much better defense.

Seattle played this game with basically two running backs. Rawls and Prosise were out. That left Michael to carry the bulk of the load and Alex Collins to fill in. The team is hoping Rawls will be ready to come back this week. There should be a real discussion in that coaching room about whether the team is better with Michael as their starter, at least for now. His performance has been consistently better than Rawls when they were both playing, and is getting better with more reps.

This offense is more dangerous when he is in the game. That is not to say Rawls should be kicked to the curb. He was a revelation last year, and deserves every chance to recapture that magic if for no other reason than that he is under club control for a few more years and Michael becomes a free agent after this season. The team needs to maximize wherever they can on offense, and Michael is part of the solution there.

Not out of the woods yet

It took until week 12 of the season for the Seahawks to get above .500 last year. They started the season 0-2, struggled with shoddy pass protection and a defense that surrendered a number of fourth-quarter leads. It was a slog. This season has started out differently. The defense is as sharp as they have ever been. The pass protection and communication between quarterback and line has been better than we have seen in recent years. Running the football has been harder, but if there is one thing we know for certain, it is that Tom Cable knows how to generate a rushing attack.

The true antagonist to this story thus far has been injury. Wilson, like the quarterback for every team, is crucial to team success. We are in uncharted territory with his hobbled state. Baldwin and Lockett are their top two receivers and both are playing through injury. Lockett was not even targeted with a pass yesterday. Their presumptive starter at running back is out, and has not yet looked like himself. Their top draft pick and starting right guard has yet to play a snap. That this team has kept their heads above water given all this is commendable.

Carroll’s Seahawk teams have always finished better than where they started. The offense, even after scoring 37 points, has the most room for growth. That group has the ability to be ranked among the best in football, as they were a season ago. It appears they will have to battle their own bodies as much as those opposing them to reach their potential. Hidden heroes may have opportunities to emerge.

This game was the first time this season the Seahawks got out of their own way and played to their level instead of their opponents. They are capable of many more games like this. Few teams can stand in their way when they play to their capabilities. They can be much better than what they showed yesterday. Their ceiling is that high. Growing can be painful. A full grown Seahawks team can be excruciating for the rest of the NFL.