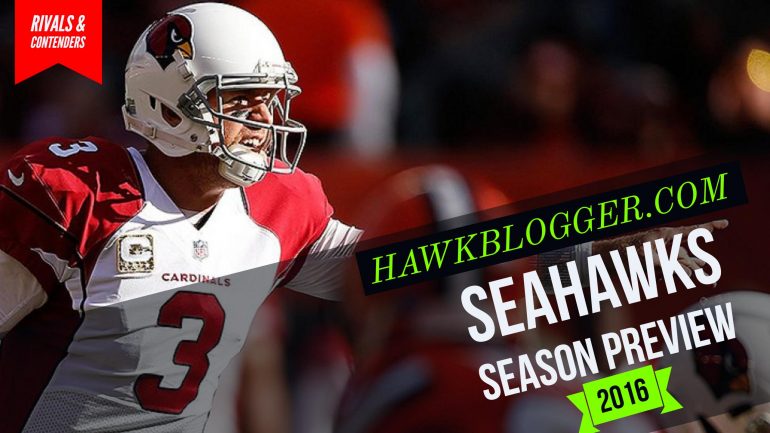 In 2013 and 2014, the Seattle Seahawks dominated the NFC. In both years the Seahawks won the NFC West, secured the #1 seed, and were crowned NFC champions after beating the Niners and Packers respectively. Going into 2016, Seattle can claim none of those accomplishments. Seattle surrendered the division to the Arizona Cardinals, falling 3 games behind them in the win column, and the #1 seed and NFC crown to the Carolina Panthers, who bested them by 5 games.

In order to reclaim their rightful spot in the NFC, Seattle will need to improve against divisional foes while outpacing a group of NFC power teams that look largely unchanged from last year.

If not for a late Carson Palmer injury in 2014, we might be talking about the back to back division champion Arizona Cardinals. Palmer was hurt in week 11, with the 6-4 Seahawks three games behind the 9-1 Cardinals. Seattle would go on to sweep the season matchup against Arizona, with both of those games coming against the Palmer-less Cardinals. Palmer would of course stay healthy in 2015, and the Cardinals would go on to lock down the division.

The list of outgoing players is long but mostly consists of backups and role players. Cooper finally earned consistent playing time, but had long been a disappointment. Massie is another starter, but not an especially high quality starter and one Arizona was prepared to lose with first round pick DJ Humphries waiting in the wings.

Outside of the line, the offense returns unchanged from the end of 2016. David Johnson looks to fully break out after starting the year behind Chris Johnson, who remains on the team as RB2 after a resurgent 2015. Johnson appears to be an elite talent that can contribute in all phases of the game, increasing the potency of an already lethal passing attack.

On defense the loss of Freeney would, despite his age, be concerning if it wasn’t for the addition of Chandler Jones. Jones racked up double digit sacks in two of his past seasons with the Patriots. He gives Arizona the pass rusher they have been trying to fill with veteran stopgaps like Freeney and John Abraham. Robert Nkemdiche further adds talent to the Arizona front seven, and should be a disruptive if sometimes error prone element against both the pass and the run.

From a purely tactical perspective, the Cardinals offer few weaknesses to exploit. On defense, the depth at corner behind Patrick’s Peterson is weak. Justin Bethel looks to start after being a target for opposing offenses last season. On offense, the performance of the offensive line will be a question mark until the new starters prove themselves.

As talented and accomplished as Arizona is, they have maybe the most risk of any of the major NFC powers. Tyrann Mathieu is the key to the Cardinals defense and will be working his way back from his second ACL tear in as many years. Carson Palmer’s injury in 2014 may have been fortunate for Seattle, but it was anything but flukey. And even if he stays healthy, at 36 years old a dropoff in performance would not be a huge surprise. Same for the seemingly ageless Larry Fitzgerald, who turned 33 at the end of August. Chandler Jones should be entering the prime of his career, but off field concerns loom after synthetic marijuana lead to him being hospitalized before a playoff game and the subsequent decision by Bill Belichick to trade him away.

The Rams haven’t had a winning season since 2003, and this year is not going to be any different. For a team that only managed 7 wins last season, they did little to add talent in the off-season.

The biggest outgoing names are probably the least impactful loses. Chris Long, by his own admission, sucked last year. James Laurinaitis had similarly underperformed for a few seasons now.

The other losses, however, are substantial. While none of Cook, Jenkins, McLeod, or Fairley are stars, each were capable starters on a team with few such players. LA will look to replace them with a list of castoffs and rookies. Jeff Fisher will likely have the easiest time replacing Jared Cook after drafting known racist Tyler Higbee. Higbee is undoubtedly a terribly person, but is talented all the same and would likely have been drafted much higher had he not nearly beaten a man to death.

Replacing a few veterans from a mediocre team want the point of this off-season for the Rams though. This off-season was about identifying and acquiring their QB of the future, Jared Goff. The Rams went all in on Goff and, while he may not be a generational talent, he certainly could develop into a quality quarterback for them to build around.

That’s not happening this year though, as early season struggles have lead the Rams to start Case Keenum. Keenum is bad and the Rams look like a less talented version of their 2015 team. Repeating 7 wins feels like a longshot.

(They’ll still beat Seattle once though.)

Many people are picking San Francisco to be the worst team in the division and one of the worst in football. It’s not an unreasonable prediction by any means, but count me among those that think the Niners could surprise relative to the extremely low bar being set for them.

Losing Alex Boone hurts, but the Niners addressed the loss well with the addition of both Beadles and Garnett. The Niners also reinforced their defensive line with DeForest Buckner, a widely regarded prospect they took 7th overall.

The roster otherwise remains largely unchanged from last year’s 5-11 team but, just like the Rams, the Niners off-season wasn’t about free agent additions. San Francisco biggest improvment came with the replacement of Jim Tomsula in favor of Chip Kelly.  Kelly’s track record is a bit mixed through 3 years, but he’s inheriting some defensive talent and has been fairly successful building an offense.

Kelly is going to need every ounce of his offensive knowledge to get even a middling showing out of this offensive unit. Many will point to Blaine Gabbert as the biggest weakness, but I’m not sure I agree. Kelly is not likely to get a high level of production out of Gabbert, but he does fit the profile of a Kelly quarterback and showed signs of competence at the end of last year. Even if Kelly is able to build on Gabbert’s modest improvements, there is still the question of who is going to be catching passes. The Niners’ pass catchers are Torrey Smith, Quinton Patton, Jeremy Kerley, Rod Streater, Bruce Ellington, DeAndre Smelter, Aaron Burbridge, and Vance McDonald. Smith is coming off his worst season, Patton has been a major disappointment in his three seasons, Kerley has done nothing to build on his productive sophomore season in 2012, and the rest are players with a little potential and zero production.

On defense, the Niners have taken a large step back from their heyday under Jim Harbaugh but that’s not to say there isn’t still talent in that unit. Eric Reid, Jimmie Ward, Arik Armstead, NaVorro Bowman, Aaron Lynch (suspended for the first four games), and DeForest Buckner are a decent core to build around. The talent around those players is not where it needs to be however, and the Niners can realistically hope for a defense ranked in the back half of the teens at best.

The NFC at Large

Last year the Packers lost Jordy Nelson, fell from 6th to 23rd in total offense, lost the division to the Vikings, but won 10 games and game seconds away from beating the Cardinals and advancing to the NFC Championship game. Aaron Rodgers is a perenial MVP candidate and probably the best quarterback in the game. The Packers have long been a championship contender in the NFC, and this year should be no different.

The loss of Mike Neal should be mentioned. Neal has never lit up the stat sheet, and is probably not widely known among fans. He was a disruptive player for the Packers though, and it will be interesting to see how the Packers make up for his absence.

Of all of the NFC contenders, the Panthers are the team most likely to take a step back. The good news for Carolina is that you can take a pretty big step back from 15-1 and still win a lot of games. And outside of it being very hard to win 15 or more games again, there is little reason to expect a decline from the Panthers.

Josh Norman leaving for Washington is the biggest question for the Panthers. Carolina spent three of their five draft picks on cornerbacks, but none should be expected to replace the play of Norman. That leaves Bene Benwikere as their best corner, a player that was picked on at time last year. The Panthers will attempt to compensate for this significant weakness in the secondary with a strong front seven, bolstered by first round pick Vernon Butler. It’s an extremely talented group, but opposing offenses will still likely find opportunities to attack through the air.

For a couple of days last week it looked like we could remove the Vikings from the list of contenders. Teddy Bridgewater’s injury was tragic and created more questions for an offense that already looked to be a weakness. But then Rick Spielman shocked everyone by making an obscenely bad trade for Sam Bradford.

Sam Bradford is a low level starter that has never won many games and never led a team to the playoffs, and the Vikings unquestionably paid way too much for him in draft picks. But the bar is low for replacing Bridgewater’s 2015 performance of 3231 yards and 14 touchdowns. Bradford will be able to ride Adrian Peterson and protect the ball while the Vikings defense puts them in a position to win every game. Bradford will not help the Vikings build on their success last year, and the trade will certainly hurt them in the long run, but it’s reasonable to expect the Vikings to repeat their 2015 performance.

The NFC East looks mostly like a group of middling teams, but one of these teams will be getting a home playoff game. If Seattle can’t beat out the Cardinals for the NFC West, it likely they’ll be facing whichever team wins this division.

Washington won the NFC East last year at 9-7, riding the coattails of an inexplicably hot Kirk Cousins. They’ve since franchised Cousins, and will be looking to duplicate his success from last year. This is a gamble, but it’s certainly possible it could pay off. With continued development from Cousins and modest improvements to last year’s lowly run game, Washington could have a legitimate top 10 offense. Combine that with further modest improvements on defense, where they’ve added a shutdown corner in Josh Norman, and going to Washington for a playoff game could be a scary proposition.

Dallas is maybe the next best team in the league, although that comes with an ever growing question mark surrounding Tony Romo’s health. While Dak Prescott impressed in the preseason, contending with the other NFC teams with a rookie QB is a large challenge. But a quarterback, whoever it ends up being for most of the year, couldn’t ask for a better situation than Dallas. The best offensive line, a stable of strong running backs headlined by 4th overall pick Ezekial Elliot, and some guy named Dez, should give Dallas a shot in most games.

The Giants are led by a two time Super Bowl champion, so you probably can’t completely write them off either. (Yes you can.)