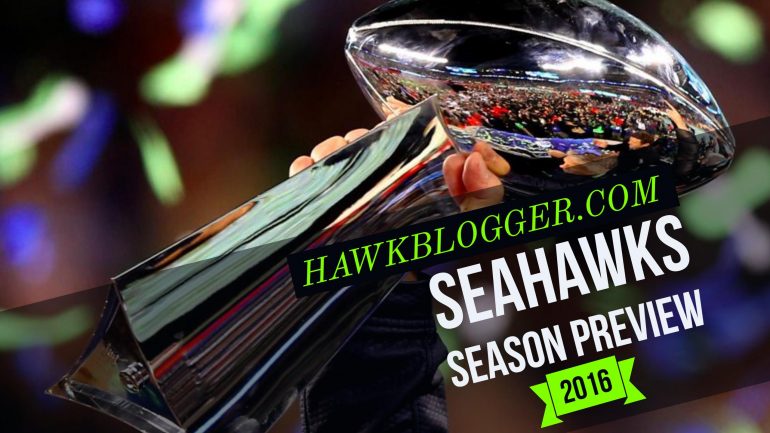 No season preview series is complete without some certain-to-be-wrong predictions. We are pushing the envelope here this year and letting all of you look as foolish as those of us here at HawkBlogger.com. Let’s start with what the oddsmakers are saying about this season.

Seattle started last season tied with the Green Bay Packers and New England Patriots as favorites to win the Super Bowl. Each stood at 15/2 odds. This year, the same three teams are atop the Vegas oddsmakers list of likely Lombardi winners. This time, the Packers and Patriots chances to win are judged to be slightly better than last year. Both are listed as 7/1 odds to win it all. Seattle is a skosh less than last year at 8/1 odds. No other team is closer than 10/1 (Pittsburgh and Carolina).

Seattle starts the season with a home game against the Dolphins. That will mark just the fifth time the Seahawks have hosted the Dolphins in franchise history. That game opened with the Seahawks as 7.5 point favorites, and has swelled to 10.5 in most places. Many are still picking the Seahawks to cover. That would be the sixth straight time the Seahawks would have won a week one home opener, should they pull it off. They won the division in three of the previous five times they won a home game to start the season, per Pro-Football-Reference.com.

If this 10.5 point spread holds, it will be the largest ever opening game number for the Seahawks. They enjoyed an 8.5 point spread against the Packers to start the 2014 season coming off their first Super Bowl win, and covered that easily in a 36-16 victory. Their largest opening day spread so far was 9.5 points against Detroit in 1999, in a game they actually lost 28-20 under Mike Holmgren.

I thought it would be fun to do community predictions this year. Below is a survey where you can make picks for every game of the season. I will publish the results in the next few days. My predictions are intentionally posted underneath the survey to avoid biasing all of you, so be sure to scroll past the survey once you are done. 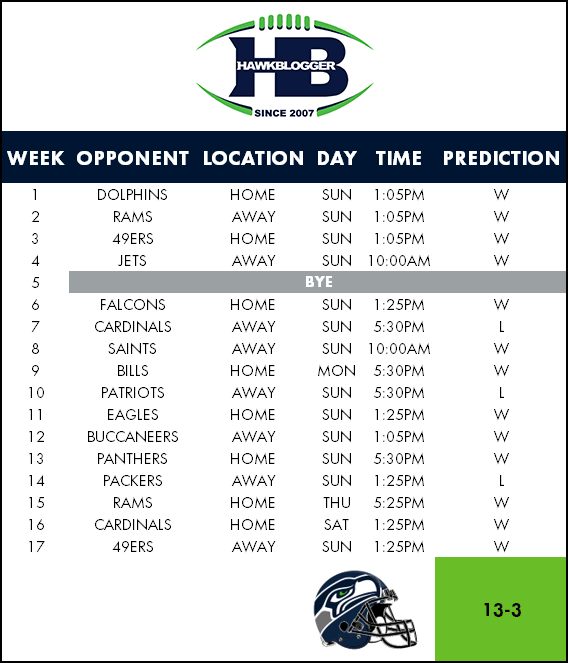 Senior ESPN writer Mina Kimes and The Ringer staff writer Danny Kelly joined me to a hangout to discuss this upcoming season. A few friends of the blog, like Scott Enyeart and my son, added their predictions in the spreadsheet below.

Are you still here?

If you made it this far, you are a true Seahawk addict. I respect that. Many of you became familiar with my proclamation in 2013 that special things happen during special seasons. This is going to be a special season. This team has been like a heavyweight champ knocked off balance by a few powerful stiff jabs. They have regained their footing and the rest of the NFL is going to feel the power that comes from full focus and resolve. There are other talented teams who have every right to expect they will finish the season on top. None of them are Seattle’s equal. The Seahawks are going to win the Super Bowl again. It is going to be different this time. This will not be a joyride. It will be a reckoning.

This season is not about proving the Seahawks can win a ring. This season is about confirming the worst fears of 31 other NFL cities. The Seahawks are here to stay. There will be no one and done story. A double barrell shotgun of mayhem has just been reloaded with fresh talent in all the right places. Seattle will feature the best offense this franchise has seen, and a defense that only knows excellence. They will start strong and build momentum. The ball will bounce their way.

Be skeptical if you must. Teams like this, though, come along rarely. Protective cynicism robs you of the chance to indulge in the glory. Savor each snap. Cast aside the doubts, and enjoy what should be one hell of a ride. Football season is upon us, and the Seahawks have very bad intentions.