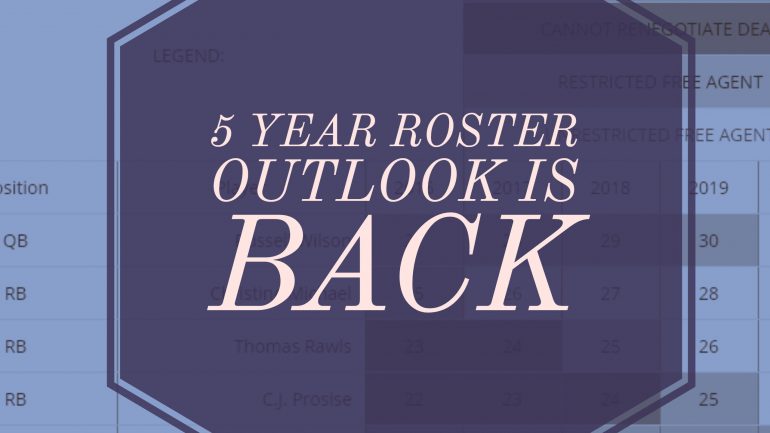 Many of you have come to rely on the roster outlook we post here for reference. It was way out of date, but no longer! I have removed the old names and added the new, as well as updated all of their five year contract statuses and ages. It is a handy way to see which parts of the roster are setup for stability the next few years, and which are facing some turnover. A few things struck me after I completed the update.

1. Seahawks are setup to sustain this run

It is hard to remember that there were significant questions about the Seahawks roster stability just a few years ago. Russell Wilson and Bobby Wagner were entering their last contract year before last season. Richard Sherman and Earl Thomas were in the same boat the year before. Seattle was forced to say goodbye to players like Golden Tate, Byron Maxwell, and James Carpenter, but they have retained their core as well as any team in the league.

This new configuration has yet to win a Super Bowl, but if they do, they are setup to make a 3-4 year run. They are set at quarterback, receiver, linebacker, and the whole secondary.

The Seahawks best players are mostly veterans. If this group is not good enough to win it all, there is not a particularly convincing story to tell about how they will improve considerably outside of normal draft pick jackpots. There are plenty of young players, but Frank Clark and Tyler Lockett are probably the two with the most upside at impact positions. Germain Ifedi could be great, but few great teams are built around great guard play. Jarran Reed could be great, but he is primarily a run stuffer.

Ifedi may not be able to lift the team by himself, the way a Clark or Lockett could, but his position group has the greatest reason to be optimistic about upside. Ifedi is a rookie, and under club control for five years. Mark Glowinski is a second year player who is under club control for the next three years. Justin Britt will be here at least one more season after this one, and is the same age as Glowinski (24). Garry Gilliam has two more years of club control and is just 25 years old. Then you have 22 year old center Joey Hunt, 24 year old guard/tackle Rees Odhiambo, and 24 year old tackle George Fant who are all under contract for the next four years.

The short-timers are J’Marcus Webb (a single tear rolls down every Seahawks fan’s cheek) who is signed through next season and Bradley Sowell who turns 30 next year when he is set to become a free agent again. There are young players who can step in for those guys as they step out.

I have been maintaining this roster outlook for the past few years, and the best Seahawks players were almost always the youngest. That is not the case anymore. When you get five years out, we are starting to see “3s” in front of player ages. Wilson will be 31 when his contract ends in 2020. Doug Baldwin will be 32 at that point. Cliff Avril and Michael Bennett would be 34, while Richard Sherman, Kam Chancellor and Earl Thomas would all be 31 or older. It is a reminder that John Schneider can never stop accumulating new young talent and Pete Carroll must be willing to rotate new players in should the veterans begin to fade.

The chances of finding players who are capable of truly replacing these guys are slim. That doesn’t mean all hope is lost after three or four years. Wilson should be around for another decade or more, and can keep this team elite if surrounded by the right talent and coaching. Schneider has already started the process in earnest this year by keeping so many rookies. Many of them are playing supporting roles or just essentially taking redshirt years. The more of those guys who step forward, the longer this run can last.

5. Pass rush is the top priority

You read right. Avril and Bennett are both already 30 and it may not be reasonable to expect their production to last much longer. Clark is a guy the team really needs to pop, and he is showing signs of doing exactly that. It would be a huge development if another young player joined the pass rush crew like Cassius Marsh or Quinton Jefferson. As it stands, look for Seattle to put a premium on finding additional pass rushers in the coming years. If they cannot draft them, they will not have the money to sign young ones in free agency. They would need to take the “Dwight Freeney” approach and sign ring-seeking vets as low cost. That is a risky way to build a pass rush. Defensive line talent has to be the team’s top priority for the next year or two.