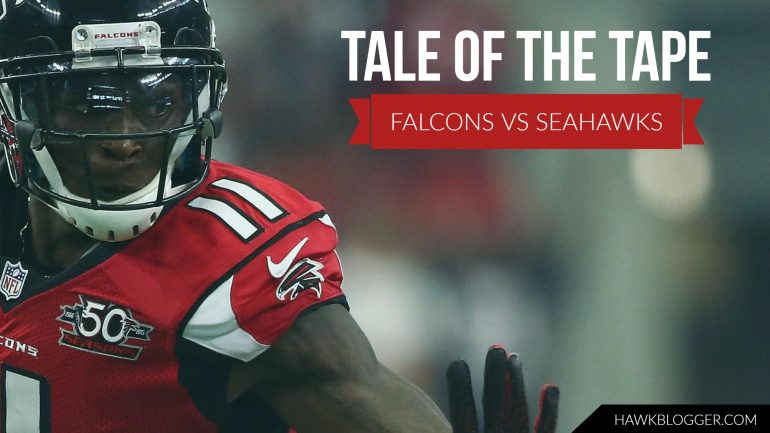 Tale of the Tape: Falcons Make for a Fascinating Matchup

The good vibes for the Seahawks generated by back-to-back dominating victories will get a stiff test on Sunday when the Falcons roll into town. They represent the best competition of the young season for Seattle, and an intriguing matchup in a variety of ways. This game will tell us a lot about both teams, and have significant impact on the NFC playoff picture. Let’s dive into the strengths and weaknesses of both squads.

While it is true that the Falcons are the best team the Seahawks have faced so far, their defense is arguably the worst. Last Sunday was the first time a Falcons opponent scored less than 28 points, and that was against a rookie quarterback getting his first start who struggled mightily. Seattle has been coming on strong with their offense, averaging 32 ppg in their last two games. The first two games of the season drag down many of the Seahawks rankings, but even so, they should be far superior to the Falcons defense they face, especially after a week of recuperating. There are not many for Atlanta. Their run defense is the one place where they at least approach mediocrity, and the Seahawks run game has been near the bottom of the league so far. Atlanta Falcons starting linebackers Deion Jones, Devondre Campbell and Paul Worrilow have missed time with injuries, after already losing starter Sean Weatherspoon for the year, but are expected to take part in practice this week in hopes of returning for the Seahawks game. That will be an important storyline as the Atlanta defensive line of: Brooks Reed, Jonathan Babineaux, Grady Jarrett, and Tyson Jackson is easily the least talented of the four teams Seattle has played thus far.

A key part of the Falcons run defense is rookie safety Kemal Ishmael. He plays a Kam Chancellor-like role in run support near the line of scrimmage and played a physical, impressive game against the Broncos. He leads the team in tackles.

Robert Alford and Desmond Trufant make for a nice pair of cornerbacks, with Alford totalling 6 passes defensed and 2 interceptions thus far. He also, though, is among the most penalized corners in football since coming into the league.

Vic Beasley Jr. (4.5 sacks) and the ageless Dwight Freeney (3.0 sacks) provide a decent pass rush at times. Only one other player (Trufant, 1.0) has a sack through five games. Beasley recorded 3.5 of those sacks against the Broncos, and their rookie quarterback.

This is a game where the Seahawks will absolutely try to reestablish their run game. Their offensive line is finally healthy. They face a meek front seven, and it is the one part of the team that has failed to pick up steam. Pete Carroll has changed his tune recently, stressing the Seahawks offense is not run-first. He wants them to be “balanced,” so that they can attack whatever weakness the defense has. Either way, the run game is due. Even with the rankings in favor of Atlanta in that area, look for 150+ yards on the ground from the Seahawks. You may see the Seahawks play more two tight ends packages in this game to keep Freeney off the field more often.

Throw in Austin Safarian-Jenkins score in the first game of the season, and the Falcons have allowed a tight end touchdown in all but one game this season.

Seattle must exploit this matchup. This will be especially important in the red zone where the Seahawks rank just 25th in the NFL. The Falcons are one of the worst red zone defenses in football. Put that together with their struggles against tight ends, and Graham should be a pivotal player.

Tyler Lockett has not been himself since injuring his knee against the Rams. So much of the talk has been about Wilson’s healthy, but Seattle will become far more dangerous if Lockett is back creating big plays.

It is not enough for the Seahawks offense to play well. They should play like this game is on their shoulders to win, because it very well might be. Think about the game against the Steelers last year when the Seahawks won for the first time in the Russell Wilson-era when an opponent scored more than 25 points. This game has the potential to be a similar shootout.

If the Seahawks offense and Falcons defense is the undercard, consider this the main event. Matt Ryan is a far better quarterback than most people give him credit for. He pushes the ball downfield with accuracy while showing a willingness to take what the defense gives him with throws underneath or in the flat to his backs. That skill set, along with a variety of weapons, makes for a powerful combination.

Seattle’s defense is playing as well as it ever has during the Pete Carroll era. Some naysayers point at the level of competition they have faced so far. That is fair, to a point. Nobody should be penalized for playing lights out. That said, this is the first true test for the defense. They have a tendency to prove their worth in these matchups. Ryan will target Julio Jones often, and he will be productive. Richard Sherman is arguably the best corner in football, but Jones and Ryan are going to make some plays on him just like Brandon Marshall and Ryan Fitzpatrick did. The difference is that Ryan won’t make the same mistakes Fitzpatrick did. He has two interceptions all year in 168 pass attempts. Jones has not had a huge game against the Seahawks since Sherman entered the lineup back in early 2011. In fact, he has only one game where he and Sherman both played. That was the 2012 playoffs, and Jones caught just 6 passes for 59 yards.

All Sherman needs to do is make life difficult for Jones and Ryan. He does not have to shut Jones down, or even pick off a pass. By forcing Ryan to go through his progressions, the pass rush will have a greater chance to get home and the other targets are not as lethal.

Atlanta is more than just Jones. Their running backs are dynamic, with Tevin Coleman representing a real threat as a receiver out of the backfield. That type of player has given the Seahawks fits in years past. If Jones and fellow receiver Mohamed Sanu can draw the defense deep, it will leave a lot of room underneath for the running backs to catch and run. This will be as tough of a game as the Seahawks linebackers will face all season. They will likely key on the backs and take their chances with tight end Jacob Tamme. He is no slouch, with 17 receptions and 2 touchdowns already, but Coleman and Devonta Freeman are game breakers.

A key strategic decision for Atlanta will be how they handle personnel groupings. Look for them to play more two receiver sets to force the Seahawks into their base defense and get Jeremy Lane off the field.

That will cause the Seahawks to play their SAM linebacker more often, and there are real question marks there after Mike Morgan was put on IR, leaving no clear starter. That means Cassius Marsh and Kevin Pierre-Louis could play big roles in this game. Atlanta will try to get them isolated in either the running game (Pierre-Louis) or the passing game (Marsh), depending on who is playing the SAM role at the time. Pierre-Louis has the athleticism and speed to be helpful in tracking down these running backs when they catch the ball.

It is shocking to see that an offense scoring this many points has been pretty mediocre in converting 3rd downs and scoring in the red zone. Six of their 18 touchdowns have covered more than 20 yards. They are barely over 50% on their red zone chances. It nothing the Seahawks should hang their hats on, but it does represent their biggest advantage. Seattle is the best team at football in limiting pass plays over 20 yards. Atlanta is the best team at football in completing pass plays over 20 yards. It has been proven time and again that it is very tough to try and make a living passing the ball over the top of the Seahawks defense.

Seattle wants to make this a physical and punishing game. They will willingly surrender some yardage if they can tackle with force and either cause turnovers or hold Atlanta to field goals. The Seahawks offense should be expected to score close to 30 points and possibly more. Their defense just needs to slow the Falcons down.

The Falcons added Alex Mack at center over the offseason to help solidify a line that was struggling last year. That has made their running game more physical. Seattle has been one of the best run defenses in the NFL this year. Atlanta has had only one game where they really struggled to establish the run (52 yards vs Tampa Bay), and that happened to be their one loss of the season. This is an underappreciated key to the game.

Nobody has been able to run on the Seahawks defense this year when the game was in question. The Falcons scored 48 points against the Panthers when they were held to 90 yards rushing, but that was because they threw for over 500 yards against a porous Panthers secondary. They won’t be able to do that kind of damage against this Seahawks secondary. Stout run defense to make them one dimensional will be key.

In a game that could wind up being close, the special teams play could be big. It is rare for Seattle to at a disadvantage on special teams, but without Lockett at full strength in the return game, the Seahawks have suffered, especially on kickoffs. Atlanta is strong across the board.