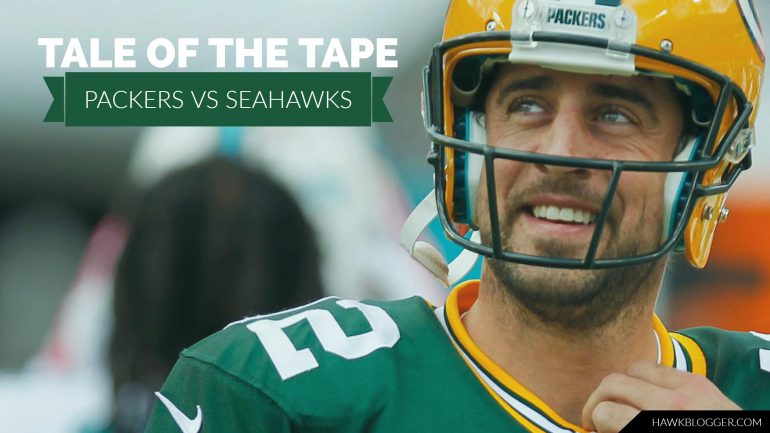 Tale of the Tape — Packers and Seahawks Always Entertain

Hold onto your butts. The Seattle Seahawks are playing the Green Bay Packers. Strange and wondrous things happen when these two teams play, which they have done four times since 2012. There was the famous catch by Golden Tate to win Russell Wilson’s first game against Aaron Rodgers and the most improbable comeback in postseason history in the 2014 NFC Championship. Green Bay boasts the largest margin of victory over the Seahawks in the last five years when they won by 10 points last season. Remarkable things tend to happen when these two teams square off. This game will feature bitterly cold weather and possibly a bit of snow. Prepare for a memorable matchup no matter what the records or numbers imply.

The roller coaster season for the Seahawks offense continued last week as they reached a new peak with over 500 yards and 40 points against a stout Panthers defense. Especially impressive was their ability to establish a ground game. Nobody who had watched the loss to Tampa Bay had reason to feel confident that this Seahawks offensive line could block that Panthers front four on the way to 240 rushing yards. Yet, that’s exactly what they did.

They will now face a Packers defense that is showing some evidence of righting the ship after four apocalyptic weeks that saw the team allow an average of 38.3 points per game. You read that right. Before the Packers held Philadelphia and Houston to 13 points each the last two weeks, they had allowed four straight teams to score more than 30 points and two of the four scored over 40 points. That is about as bad as defense can be. One could argue that the Eagles and Texans are hardly tough tests for a defense, so this Packers defense has a lot left to prove. The weather could play a major role here, and help hold down the explosive (yes explosive) Seahawks passing game. Green Bay is still coached by Dom Capers on defense, who is known for his pressure packages. The Packers have done a good job created pressure on the quarterback this year, ranking fourth in sack rate. Seattle has been yielding plenty of pressure of late. After allowing three or more sacks just once in the first seven games of the year, Seattle has allowed at least three sacks in four of their last five games. Their once sterling opponent sack rate has risen and their ranking (22nd) is now threatening to reach the Tom Cable norm of 25th or worse. This was looking like the first time in Cable’s career that he would coach a line that ranked higher than 25th in opponent sack rate. This game will go a long way toward determining whether this team can break Cable’s sad streak.

The Packers feature a variety of pass rushers, with Nick Perry (8.0 sacks) leading the way. Clay Matthews tends to get all the publicity, but he is 30 years old and has not had a 10+ sack season in two years. He is battling a painful shoulder injury that is further limiting his pass rush potential. Perry left the game against the Texans with a hand injury. He attempted to return with a club-like cast, but left shortly thereafter. His status this week is up in the air. Should he be unavailable or ineffective, a lot of the burden would fall on the ageless Julius Peppers (6.5 sacks), who can still bring it.

Green Bay also appears to have a strong run defense. Only four teams have managed to run for over 100 yards against them, but a pretty compelling case could be made that those were the only good run teams they have faced. They are not as talented as the Panthers run defense, but neither were the Bucs. The weather could increase the importance of the run game, and that would be good news for a Packers defense that needs some help limiting big pass plays.

Seattle ranks 6th in the NFL in explosive pass plays. That has been a bugaboo for the Packers defense, who rank 14th in giving up explosive passes. Some of that is on personnel, but it is also fair to question the scheme and calls from Capers. The Redskins turned a tight game against the Packers into a blowout by exploiting blitzes and turning them into huge chunk plays. Russell Wilson was completed every pass against the Panthers blitzes last week. If Capers wants to bring extra defenders to create pass pressure, which will be even more tempting depending on injuries, he could be playing right into Wilson’s hands.

Some fans would be surprised to know the Seattle offense ranks 6th in “mega-explosive plays” of 30 or more yards.  Tyler Lockett has two such plays last week alone. The Packers secondary has struggled mightily in containing wide receivers. Football Outsiders lists Green Bay as 32nd in the NFL in defending #1 wide receivers, 31st in defending #2 wide receivers, and 26th in defending “Other WRs.” That would explain why the Packers rank 32nd in the NFL in opponent yards per attempt. Doug Baldwin and Lockett are a handful, and Jermaine Kearse is coming off his best game of the season. There are also some linebacker injuries the Packers are dealing with in Jake Ryan and Blake Martinez that could make life for Jimmy Graham a bit easier.

This is a game where the obvious plan would be to lean on the passing game to create chunk plays against an unsound Packers pass defense. The weather could scuttle that. Either way, Seattle has shown in recent weeks that their running game is returning to form. Even before the 240 yards against the Panthers, they showed life against the Bucs in the read option and created plenty of openings against the Eagles. What was the 30th ranked run offense three weeks ago, has climbed all the way to 20th now, and no team is averaging more yards per carry the last three weeks.

One area the Seahawks need to exploit in this game is the Packers red zone defense. Green Bay ranks 28th in the league in that category, but the Seahawks have been struggling to be efficient down there of late. You don’t want to rely on the kicking game in frigid temperatures. Just ask Minnesota about that.

This is a good, but not great, Packers offense. Their offensive line is underrated and Aaron Rodgers is still terrific despite reports to the contrary. He has 29 touchdowns and just 7 interceptions. He has thrown at least two touchdown passes in seven straight games. Jordy Nelson, Randall Cobb and Davante Adams form a dynamic receiving trio. Rodgers is always tough at home, and is productive at any temperature.

Seattle comes in with the top-ranked scoring defense, but will be without the services of their All-Pro safety Earl Thomas. You can be sure the Packers will attempt to strike gold by isolating Steven Terrell the way Carolina did on one play last week. Terrell has held up rather well other than that one play, but the spotlight will be on him in a different way for this contest. Rodgers led the Packers to a big victory last year by nimbly avoiding pressure and manipulating the Seahawks secondary while on the move to create big plays. Seattle was getting pressure, but Rodgers was able to move around and through it to find open throwing lanes. He has supreme confidence in his arm and will attempt throws that most quarterbacks would not. The results show his gambits usually pay off.

Seattle has struggled this season with elite quarterbacks who excel on third downs. Rodgers is certainly one of those, as the Packers rank 2nd in the NFL in third down conversion efficiency. The Seahawks defense is all the way down at 27th in that number. Rodgers can help his suspect defense greatly by methodically moving the ball down the field and converting on third down. That has been the recipe teams have used to beat Seattle this season.

Many of those teams also committed to the run game on first and second down to create 3rd and manageable situations. The Packers may do the same, but it seems unlikely. They are down to a pretty desperate running back situation, and both Rodgers and head coach Mike McCarthy prefer the passing game.

Rodgers is a master of drawing defenders offsides and then going for big plays. He victimized Michael Bennett repeatedly last year. Watch for that again Sunday.

One injury to watch is starting guard T.J. Lang, who missed the game last week. It is unclear whether he will be back, and he is one of their best linemen. Michael Bennett and Cliff Avril have given the Packers line fits in past years. When they can manage to stay onsiders, they do well in creating disruption.

Seattle has gone two straight weeks without a sack. That needs to change. Look for Kris Richard to be aggressive in his calls. Rodgers is stubborn, and can become too reliant on his ingenuity to escape trouble when his initial reads are not open. He has taken a large number of sacks over the course of his career behind a very good line.

The Seahawks don’t have any considerable advantages over the Packers offense. They are just better. The same discipline that has made it hard for every other NFL offense to score against the Seahawks makes it hard for the Packers. The 27 points Green Bay last year were the most by the Packers against this Seahawks defense. Seattle was missing Kam Chancellor in that game and had Cary Williams playing cornerback. Frank Clark barely played. It still took a combination of savvy hard counts, brilliant passes, and Seahawks turnovers to win that game. Rodgers will need to be similarly splendid Sunday to lead the Packers past this Seahawks defense.

Special teams can always be an adventure in cold weather. Lockett has been back to his dangerous self of late, and the Seahawks coverage teams have been great. Green Bay is solid on special teams and is more accustomed to the weather. Although Candian Jon Ryan may beg to differ.