Three weeks ago, I updated the rankings formula to increase the emphasis on run offense and defense. It was done, in part, due to my dissatisfaction with how the Dallas Cowboys were being undervalued. It is with no small dose of irony that the change helped the Seahawks stay atop the Cowboys in the rankings this week. On the strength of an emerging run game and still strong run defense, the Seahawks now own their best run differential (+0.5 yards per carry) of the season. While their 4.1 yards per carry on offense is way below the Cowboys 4.8, the Seahawks run defense at 3.6 is far better than the Cowboys at 4.2. Dallas has a modestly better run differential (+0.6 vs +0.5), but the Seahawks have a far stronger passer rating differential (+14.9 vs +7.4).

The Cowboys continue to produce remarkable points allowed numbers in spite of what measures as a poor run and pass defense. That may be due to their still bottom barrel SOS. Take last week. A truly meek Vikings offense was only able to score 15 points, but their underlying numbers were better than their typical showing against other defenses. When Dallas has faced a strong offense this year (Washington x2, Pittsburgh), they have allowed an average of 26.3 points per game. It remains to be seen whether they can hold up to a team that is strong on both offense and defense. Very few of those teams exist this year.

Seattle can be one of those teams if they find consistency on offense the rest of the way. That will be far more possible if Thomas Rawls, Russell Wilson and the running game continue their renaissance. What was the 30th ranked running attack in the league, has climbed into the teens after a torrid three week stretch that saw the reemergence of Wilson scrambles and read option runs. A Seahawks team with even an average rushing attack becomes the odds-on favorite to win a ring.

Detroit becomes the latest enigma in the rankings. They throttled a good Saints team on the road, and stand at 8-4 on the year, but are ranked 23rd here. They are overcoming remarkable odds to have the record they do. They have a negative passer rating differential while giving up a 101.9 rating to opposing quarterbacks. They have a negative run differential. They have barely outscored their opponents and sport the league’s 29th-ranked SOS. The rankings believes they are more paper tigers than lions. Time will tell. 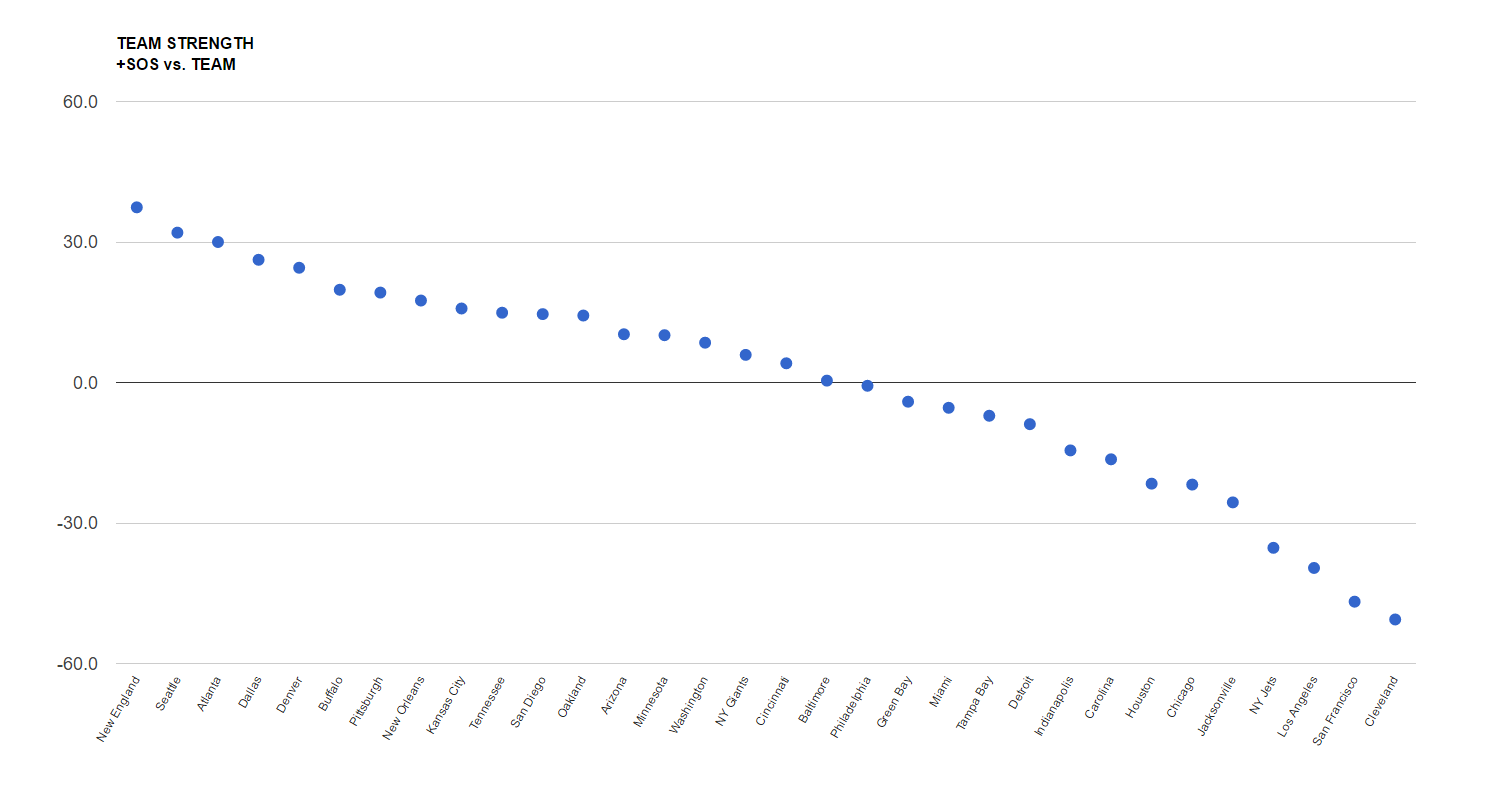 As of September 23, 2014, I have added a strength of schedule component to the rankings as well.
As of November 22, 2016, I have increased the weighting of the run game and point differential. Yards per carry will be multiplied by 10 to make it more evenly weighted with the passer rating. It is still roughly half as important, but will have a greater impact. Point differential will be multiplied by two as it still should be among the most important aspects of measuring teams.
Start typing to see results or hit ESC to close
softy russell wilson 49ers real hawk talk cardinals
See all results
More Stories