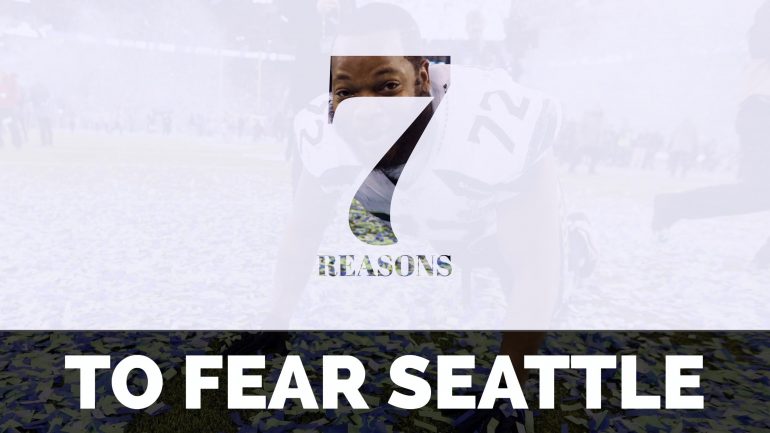 The Seattle Seahawks have done little to inspire enthusiasm over the past month. They were blown out for the first time in five years while turning the ball over six times. They lost their first home game of the year to a below .500 division rival when a playoff bye was on the line, and they barely squeaked by the second-worst team in the NFL. Playoff folklore tells us that peaking at the right time is just as important as any other factor when predicting postseason success. If true, the Seahawks might as well start packing. There is reason, though, to be wary of the popular opinion that Seattle is done for. Lost in the midst of the Seahawks sputtering finish are some key playoff indicators that bode well for the boys in blue and green.

1. Pass rush is crucial in playoffs and Seattle has the best left

The undefeated New England Patriots of 2007 lost in the Super Bowl largely due to the ferocious pass rush of the New York Giants. The Giants pass rush did in the 15-1 Green Bay Packers in Lambeau in 2011. Seattle’s own dominant pass rush derailed the most prolific scoring offense in the history of the NFL in 2013. Just last year, it was guys like Von Miller, Malik Jackson, and DeMarcus Ware who knocked Tom Brady out of the playoffs and won a Super Bowl despite a tepid offense. The playoffs are littered with tales of teams winning on the basis of superior pass pressure. No team in the playoffs has more sacks or sacks quarterback more times per dropback than the Seahawks.

2. Michael Bennett is on the upswing

Just like in 2013 when Seattle entered the playoffs with one of their best pass rushers getting healthy (Chris Clemons), this Seahawks squad is seeing the reemergence of their best pass rusher in Michael Bennett. Bennett missed five games due to minor knee surgery, and did not look like himself for the first few games back. He started to show his old disruptive self the past two games, recording a sack in each and beating linemen off the ball for tackles in the backfield.

When right, he is the most impactful player on the talented Seahawks defense. The Seahawks only had the trio of Bennett, Frank Clark (10.0 sacks), and Cliff Avril (11.5 sacks), healthy and playing together in seven games this year. Seattle is 5-2 in those contests and averaged a full sack per game more than when one of those three were missing.

3. The Seahawks have the top run defense in the playoffs

We hear a lot about the dazzling offenses in the playoff field this year, and for good reason. Atlanta has one of the best offenses in NFL history when looking at points scored. The Cowboys combine a terrific offensive line with a stellar running back to bull over almost anyone in their path. Even the Packer team who was left for dead by many, sprints into the playoffs scoring points in bushels. Each of these offenses rely heavily on their running games to set up the rest of the repertoire. No team in the playoffs is better equipped to stuff opponent running games than the Seahawks.

They finished the year ranked #1 overall in rush defense, allowing just 3.2 yards per carry. That number was earned against some of the best run offenses in the league. Why does this matter? The Falcons, for example, were held below 3.5 yards per carry three times this year. They were 1-2 in those games. The Patriots only loss this year with Brady at the helm came in a game when they were held under 90 yards rushing and under 3.0 yards per carry. The Cowboys have only been held under 3.5 yards per carry three times all year, and were 1-2 in those games. The Giants were the second-best run defense in the league this year, and were 2-0 versus the celebrated Cowboys. Seattle is even better in that category.

The only other top ten rush defenses in the playoffs besides the Seahawks and the Giants are the Patriots, who rank 8th. This is a unique advantage for Seattle.

4. Seattle has beat the best

The Patriots are the top seed in the AFC and favorites to win it all. The Falcons are the second seed in the NFC. Seattle has beat them both. In fact, the Seahawks have a better record against playoff competition than any of the NFC teams they might face.

The Giants and the Packers have arguably the most dangerous defensive fronts outside of Seattle. The Packers abused the Seahawks on every level when they last played, but the only chance they could meet again would be in CenturyLink Field. Their history there is not kind. New York is stout against the run, but their pass rush is tepid. This Seahawks line has faced teams like Arizona, Carolina and Los Angeles, who all rank in the top ten in both these categories.

If you break it down further to look at individuals, the Seahawks have faced a defensive lineman ranked among the top ten in their position (via ProFootballFocus rankings) in 11 of their 16 games this year. They only NFC playoff team with a lineman of that caliber is the New York Giants (Damon Harrison).

You might say, “What about Vic Beasley and his 15.5 sacks?” He ranked 37th overall in PFF edge defender rankings due to a very poor showing against the run. He also played the Seahawks in October and had zero sacks and zero quarterback hits.

There are no Broncos, Vikings, Cardinals, Rams, or even Panthers defensive lines to worry about. The Giants and the Packers have the best to offer in that area, but both could only play the Seahawks in Seattle. None of this means the Seahawks offensive line will suddenly be a strength, but it could pave the way for performances like the ones against New England and Atlanta.

6. Seahawks have more playoff wins since 2012 than the rest of the NFC teams combined

Seattle has played and won more playoff games than any team in the playoffs since Russell Wilson entered the league. They have won more playoff games than the entire NFC playoff field in that time. The Seahawks are 7-3 in the playoffs since 2012. The Patriots (6-3) are the only other playoff team this year with a winning record in postseason games over the past five years.

As great as Dak Prescott has been this season, and he has been fantastic, he is a rookie. No rookie quarterback has ever led his team to a Super Bowl win.

7. Russell Wilson has twice as many game-winning playoff drives as the nearest QB, and that includes Tom Brady

Wilson has been in the league since 2012, and has led his team to one game-winning drive in the playoffs each year since. His total of four game-winning playoff drives over the past four years is twice as many as his closest competition.

The statistic is credited to the quarterback, but players like Doug Baldwin and Jermaine Kearse have made numerous big plays in big moments to help key those drives. Teams like Dallas and Atlanta do not have that history to draw on. Even in their recent funk, Wilson and the Seahawks came back from a two-touchdown deficit in the final four minutes to tie the game against the second-ranked defense in the NFL.