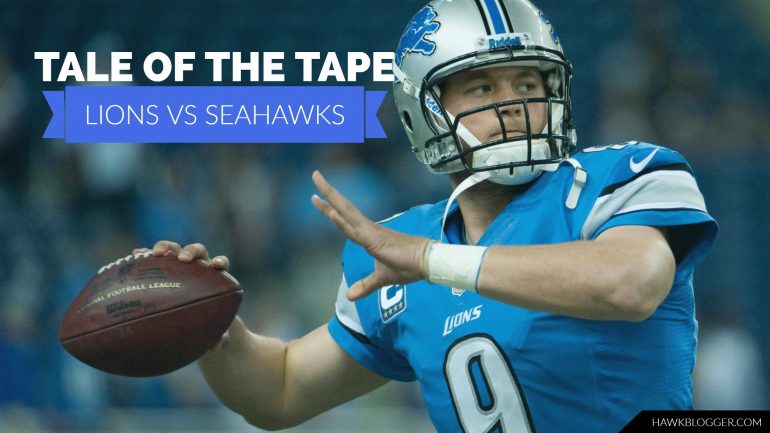 Tale of the Tape — Scuffling Lions, Seahawks Look for Mojo

Playoff time is upon us. As Mike Holmgren once said, you need your best players to be at their best to win a Super Bowl. Detroit and Seattle enter this game playing far less than their best. There is little doubt which team has more elite talent, but Seahawks fans are unlikely to be to cocky given recent history. Matt Stafford has led his team to victories over more talented opponents throughout the year with his moxie. A forecast calling for rain, and possibly snow, could play a large role in a game where both teams have needed to rely on their passing attacks to move the ball. Both teams enter this game with hopes of not only winning, but finding their mojo to help ignite a playoff run. Only one will exit. Let’s get it on.

Detroit’s defense is a bit of a mystery. Nearly all of their rankings are dismal, yet they somehow rank 13th in points allowed. They are terrible in the red zone, terrible on 3rd down, and the team ranks barely ahead of the Seahawks in time of possession (21st). They are nearly last in takeaways as well. After a little digging, I found two additional bit of information that help shed some light on this mystery.

First, the Lions defense has had to defend the fewest opponent drives (157) of any team in the NFL. By comparison, the Seahawks defense has faced 180 drives (21st-most) and the Giants defense has faced 194 drives (dead last). Second, Lions opponents have the second-worst average starting field position, with an average start of their own 26-yard line. We will get back to that in the special teams section.

Add this all up, and what you have is a Lions offense that holds onto the ball for long stretches and a Lions defense that allows their opponent to do the same. The Seahawks may not get many possessions, and may not have good field position when they do, but they will be facing a truly bad defense that could help them find their footing. Their biggest advantage is their ball control offense, which will limit the Seahawks opportunities. After that, there are some individual matchups that could cause trouble for Seattle. Ezekiel Ansah has just 2.0 sacks this season, but he had 14.5 last year and terrorized the Seahawks line for 2.0 sacks and a forced fumble. That Lions team was near the bottom of the league in sacks as well, but went off against the shaky Seahawks line. Ansah has two sacks in the past three games, and could be heating up at the wrong time for the Seahawks. He and fellow end Kerry Hyder (8.0 sacks) have to be licking their chops at this opportunity. Garry Gilliam has upped his game since returning to the starting lineup, and George Fant has been passable. Each will have their hands full in this one.

The Lions secondary also has some talent. Nevin Lawson, Darius Slay, Tavon Wilson and Glover Quin all rank highly in ProFootballFocus.com ratings. Their defensive rankings do not reflect that, as they allow the highest completion rate of any defense in the league, but they will be facing a depleted receiving corps from Seattle that is missing Tyler Lockett. Also, without a running game to speak of in Seattle, the Lions can dedicate more defenders to pass coverage.

Remember the Lions ball control offense? It’s been absent since Matt Stafford hurt his finger and the Lions started facing better teams the last three weeks. Detroit (17th) ranks just ahead of the Seahawks offense (18th) in that time span, which has led to more opportunities for opposing offenses to face this limited defense. The end result has been a three game losing streak that cost them the division title.

This is a defense that ranks 31st in 3rd down defense, 30th in red zone defense, 32nd in opponent completion rate, 30th in sack rate, and 28th in takeaways. According to FootballOutsiders.com, this is the worst defense in all of football. In other words, this is the defense the Seahawks offense has been waiting to face. This is the perfect sparring partner to begin finding some confidence in the red zone. Nothing is more important that improving their on offense, where the Seahawks rank 27th in the league entering the playoffs.

I also have this odd hunch that the Seahawks running game is going to reemerge in this game. There is no statistical reason for it, other than that the Seahawks have run effectively against tougher defenses than this one earlier this year. Call it a gut feeling based on years of watching the ebb and flow of NFL seasons.

Watch out for Paul Richardson as well. He has been steady all year, and has made the most of his expanded role since Lockett went down. The Lions just put their nickel corner, Asa Jackson, on injured reserve. He was not great to begin with, so look for Richardson and Doug Baldwin to take advantage.

This Lions offense can be pretty effective. They are highly reliant on Stafford, and he has come through repeatedly, especially with the game on the line. Their points and yards per game are low, but that is largely due to their methodical approach to moving the ball down the field. They rank 8th in the league in 3rd down efficiency and are 9th in completion rate. They are 5th in protecting the ball, giving the ball away less than once per game on the year.

The Seahawks defense will need to be patient and disciplined. They will definitely be tested, as the Lions strengths on offense align with the Seahawks weaknesses on defense. Detroit features a talented and tough set of receivers in Golden Tate, Anquan Boldin, and Marvin Jones. That has helped Stafford to distribute the ball to a variety of targets. Tight end Eric Ebron is third on the team with 711 receiving yards to add to the attack. The Lions recently lost one of their big weapons when running back Theo Riddick went on injured reserve. He was a frequent target out of the backfield. Zack Zenner has filled in ably, but lacks some of the creativity that came with Riddick’s game that helped him finish second on the team in receiving touchdowns with five.

The Lions biggest advantage is their ability to extend drives on 3rd down. Seattle has been just average there this season, and an effective formula has been to keep the Seahawks defense on the field long enough to wear them down and limit the chances for a struggling Seahawks offense to convert. A good day on 3rd downs for the Lions could spell trouble, but it won’t be enough. They must also be effective in the red zone. They are just 17th in the NFL in that category, but the Seahawks have allowed 10 touchdowns in their last 10 opponent red zone possessions to teams not led by Jared Goff. Detroit needs both the 3rd down and the red zone numbers to go their way to hope for a victory.

The Seahawks pass rush is rounding into form at just the right time. They have 10 sacks in the past three games, and are finally getting Michael Bennett back to his mayhem-causing self. The Lions are just okay in pass protection, with their strength being on the edges at left and right tackle. The problem there is that right tackle Riley Reiff missed the last game with a hip problem and has not practiced yet this week. His backup was lost to injury last week as well, causing the Lions to sign a free agent tackle.

That could lead to three weak links on a line that has only been okay during the year. This would be a great time for the Seahawks pass rush to take over. That trio of Bennett, Frank Clark, and Cliff Avril represent the best chance for the Seahawks to make noise in the playoffs. They have to be their best.

Seattle is also the best run defense in the playoffs. The Lions do not rely on the run, but Zenner has been mildly effective in his two starts. He is a straight-ahead runner who should struggle to find room against the strength of this defense up the middle.

As good as Detroit has been on 3rd downs this year, they have struggled the last three weeks, dropping to 19th in that category during that time. Meanwhile, the Seahawks 3rd down defense has been sizzling over that same stretch, allowing just 6 conversions in 32 attempts (19%). That is by far the best in the league during that time. The next best was the Patriots at 29%, a full 10% higher.

If the Seahawks can hold down the Lions on 3rd down, this game should not be close.

This is one of the Lions secret strengths. They are great in the return game, and pretty darn good in coverage. This is how their opponents have the second-worst average starting field position (26-yard line). Seattle signed Devin Hester to take over return duties, but his biggest contribution should just be experience in big moments making tough catches. One legitimate concern is his five fumbles this year on returns. He has recovered three of them himself, but that is not what any Seahawks fan wants to see.

The Seahawks special teams has become a major problem, especially the kicking game. Jon Ryan is 23rd in the NFL in net punting yards. Stephen Hauschka is getting extra points and field goals blocked with alarming regularity. And now, the team is introducing a new long snapper into the mix after losing Nolan Frese to injury. Frese was not very good this year, but there is no guarantee his replacement will be better. If this game is close, big advantage to Detroit due to their special teams.