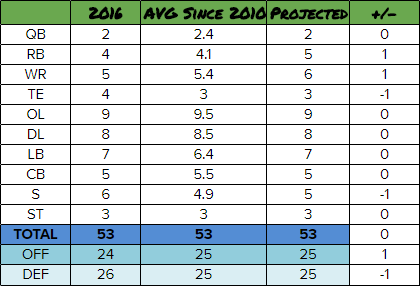 This table shows which players I currently expect to make the final cut, with a little color coding to represent my relative level of confidence. The farther we get into preseason, the greater the confidence I will have in these projections.

This is a good example of something that could change drastically in the coming weeks once games begin, but as of now, Amara Darboh has not been one of the six best receivers in camp. The team usually keeps just five at the position. He is a big guy with some nice special teams ability, but you can say the same of Tanner McEvoy, and McEvoy can also play quarterback in a pinch and has already shown some big-play ability. Pete Carroll has gushed about McEvoy more than I would have expected, which is contributing to this prediction. I also have J.D. McKissic making the team because he clearly has been the fifth-best receiver, and he is a very good alternative option at punt and kick returns. Finally, he is best suited to replicate the role of C.J. Prosise should the second-year back be unable to stay healthy again. If I am right about McKissic, and right about six receivers, it comes down to McEvoy or Darboh. Keep an eye on those two in the preseason games.

With Ethan Pocic able to play backup center, and Carroll already talking about a long career in Seattle for Jordan Roos, it is looking like Hunt’s days in Seattle are numbered.

This is a large number for the position, but there is a ton of special teams talent in that group.

The star of the first few days of camp, Collins has faded a bit once the pads came on and Chris Carson has risen. Games will be a huge factor in determining the fate of those two players.

The Morning After: Seahawks faceplant in first round, need changes