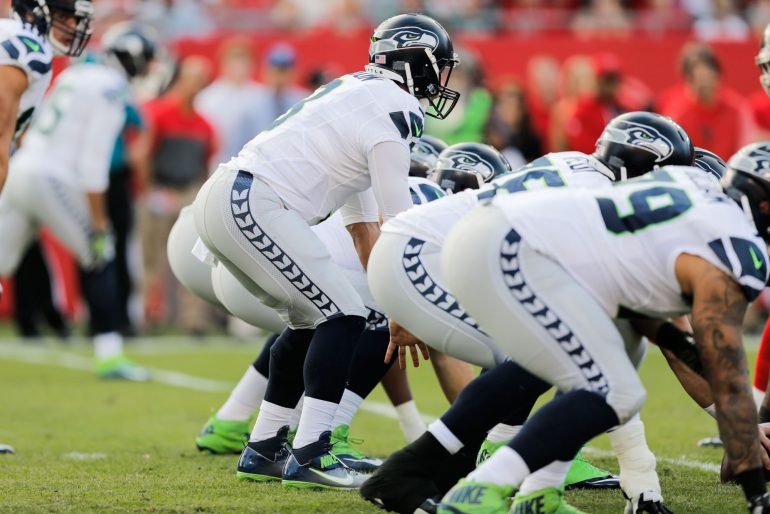 Things I’m Thinking Ahead of the Seahawks First Preseason Game

Tilt your head one way, and it feels like a lot has transpired in the two weeks since training camp opened. The team’s top pick was lost to a non-football injury. Various players have stepped up or faded to the background. The depth chart has started to stabilize. Tilt your head the other way, and it feels like almost none of it matters until the games begin. Nobody has been tackled to the ground. All plays thus far have come against familiar and repetitive faces. There has not been a single true running play given the contact rules. The truth will start to reveal itself in a far more meaningful way when the Seahawks take the field Sunday night against the Los Angeles Chargers. I enter that game with a few things on my mind.

A case for Oday Aboushi as the starter at right guard

Mark Glowinski has had a nice camp so far. He has been mostly running with the starters at right guard. I like Mark. I like his father. I also think the team may be better served by starting Oday Aboushi instead. Increasingly, I like the notion of veteran players saddled up next to less experienced teammates on the line.

George Fant is likely to have Luke Joeckel to his right. Joeckel may not have been a standout lineman through his career, but he has played a lot of games. He can help relay calls to Fant, point out alignments in the defense, and generally help simplify the game for Fant.

Whether Germain Ifedi or Ethan Pocic win the right tackle job, each would benefit from similar steadiness and stability to their left. Glowinski started throughout last year, and is surely better equipped to handle what is coming his way this time around, but Aboushi is entering his fourth year in the league.

An interior trio of Joeckel, Justin Britt, and Aboushi would give the Seahawks a more veteran group anchoring the middle of the line. Youth on the edges is going to be a challenge no matter what the team decides, but perhaps that risk can be mitigated a bit with more experience inside.

Is Shaquill Griffin going to be special right away?

Griffin started out camp with a few nondescript practices. He has come alive since then and looks like a guy who could challenge for the opening day starting role opposite Richard Sherman. I see a guy who has a Pro Bowl ceiling. Young corners are often exposed in their first game action. We get to see if Griffin will bite on double moves, or get caught out of position in zone coverage. We also get to see how physical he is versus the run. My bet is he is going to add a lot more people to his bandwagon after this game.

Chris Carson has not won me over yet

I understand all the hype. He has the body, the running style, and the willingness to block that the Seahawks look for in their backs. What he does not have is much shiftiness or burst. He is more of a strider than a stop-and-go back. Carson may end up being worthy of the buzz he is receiving, but I need to see him perform against live defenses and compare that to how the other backs look.

How does Michael Bennett look?

The dynamic pass rusher has looked a little less dynamic during the early stages of camp. Perhaps, he is just ramping up slowly for the regular season, or we have an issue on our hands. The team will be relying on Bennett for almost all of the interior pass rush the season given the injury to McDowell.

Can Nazair Jones be more than a rotational run stuffer?

The other defensive tackle drafted by the Seahawks flashed during the scrimmage, showing more pass pressure than advertised. If he can be more than a run stuffer, it would be a huge development for the team. Keep an eye out for #92.

I currently have the diminutive receiver making the final roster. He can back up C.J. Prosise as a receiving running back and Tyler Lockett as a kick and punt returner. Should he make it, the team would have to decide if they want to keep six receivers, and if so, which guy makes it as number six? Tanner McEvoy and Amara Darboh are the leading contenders, but Kasen Williams and Kenny Lawler may have something to say about that.

He is still raw, but the speed is undeniable. It would be hard for him to make the final 53, but showing some special ability in these games could go a long way toward tempting the team to invest in him on the practice squad.

Has the run blocking improved at all?

Much of the attention is paid to the Seahawks troubles in pass protection. While that is obviously a critical area where the team needs to improve, it is arguably more important that the team becomes a better run offense this season. It is very hard to judge the running game during practice even when they’re wearing pads. What I’ve seen thus far has not been very promising. We do not need to see 40 yard breakaways, but it would be really important to see some reliable four yard gains against the Chargers starting defense.

Can the two tackles hold up on the edges even a little bit?

This will be a serious test for the two youngsters on the outside of the Seahawks line. Fant and Ifedi will have their hands full with Joey Bosa and Melvin Ingram, assuming they play. I hope we get to see Ethan Pocic get some snaps with the starters so we can see how he holds up as well. My expectations are pretty low. The goal here is to see if the offense can even function.