The Morning After: Disappointing Seahawks Fail on All Fronts, Lose 33-27 to Titans

Navigation is often considered a mundane task. Chart the most efficient course between your starting point and your desired destination and then follow the resulting directions. Our earliest ancestors needed this skill just to leave their caves to hunt and find their way back. Modern life has automated the process with GPS constantly updating a variety of factors to ensure the quickest route. One thing that connects the ancient and present forms of navigation is the need for fixed points to allow for calculation. Our ancestors used landmarks to chart their course. GPS uses man-made roads and traffic laws. Navigation gets far more difficult when that structure is lost. That is where the Seahawks find themselves after a defeat that saw presumed fixed points to be absent. A quarterback who missed multiple key throws in the first half and a defense that was manhandled in the second, left the team spinning and lost. Captains rely on the steadiness of stars to calibrate their sextant when no landmarks are in sight. The Seahawks have no chance to be a team that matters if their stars are not steady.

What we saw on Sunday was confounding and frustrating. Russell Wilson finished the day with a career high in passing yards and four touchdowns. He had no interceptions, and a sparkling passer rating of 110.3. Yet, he started the game missing wide open receivers for big gains or on critical third downs. He was consistently high on throws, and his inaccuracy could not be blamed on pass pressure as he had time and space in these moments. That he eventually caught fire does not excuse a variety of poor throws and poor decisions. The team needs him to be better. Here are a few specific moments that stood out to me.

Link to video if it is not appearing on mobile

This would have been a huge gain. Baldwin was wide open, as was Tyler Lockett at the bottom of the screen. If Baldwin had beat the one man trailing him, who knows how far he would have gone? The pass protection was good enough and the pocket was clean to step into. This is a throw he needs to make 100 times out of 100.

Missed high on 3rd down near field goal range

Later in the first quarter, Wilson misses Baldwin again on a 3rd down throw that was sky high despite time and decent space. A completion here might have led to a first down given Baldwin made a number of defenders miss during the game, but would have definitely put the Seahawks in field goal range.

Poor judgment on near fumble

Justin Britt botched the snap as he did a few times during the day, and the line did a terrible job on this play, but what Wilson does at the end here is inexcusable. The Seahawks were incredibly fortunate that officials had blown the whistle calling him down because he clearly fumbled and would have likely cost the team the game right there. Wilson makes some amazing plays to save the teams from sacks, but there was no way he was getting rid of this ball and needs to just live for another day.

Wide on 3rd down throw in 3rd quarter

After the Titans took back the lead in the 3rd quarter, Wilson missed Baldwin on a third down to give the Titans the ball back. Again, no pressure. This should be a high percentage pitch and catch.

Notice on this play the linebacker creeping up to the line on the left side of the line, near the top of the screen. It appears that Wilson did not notice and did not adjust the protection. Chris Carson may also be at fault, but realigning him to Wilson’s right would seem to be the proper pre-snap adjustment. Wilson compounds the problem by retreating straight back and moving the team out of field goal range.

Wilson had tons of great throws, and put up enough points to win. He is not terrible, as some folks like to jump to. He is also not flawless or close to reaching his full potential. How many times have we seen him snap into action at the end of a half or when the team gets down big? The popular narrative is that is because the team goes up-tempo. I see it a little differently. Wilson is at his best when his back is against the wall and he is not overthinking. If this were baseball, Wilson is like a closer being used in a non-save situation early in games. He is not as sharp or decisive.

The team needs him to find that mental edge from the opening snap. If going up-tempo helps him do that, then so be it. Doing that largely means abandoning the run. You may say, “so what, they can’t run anyway!” While the run game is certainly not where it needs to be, the playcalling continues to keep them from finding out what they have. Just 1 of the first 6 play calls, and 3 of the first 9 were designed runs. Not enough. Also, the team is now 0-4 when Wilson throws for 350 yards or more and 1-5 when he attempts 40 or more passes. Switching to a fast break pass offense may not be the salve fans want it to be.

My expectations for Wilson are high, but they are even higher for this defense and they were nowhere near them in the second half on Sunday. It looked like a terrific day early on with Tennessee looking completely overwhelmed by the Seahawks front seven. The disruption I had been hoping to see was there. Backs were getting met behind the line of scrimmage or needing to stop in their tracks as penetration blew up designed runs. Coverage was sticky as Marcus Mariota was unable to find open receivers despite plenty of time to throw.

It even looked like they forced a game-changing turnover before it was called back due to a pass interference call on Richard Sherman, who then removed his helmet and got an additional 15 yard unsportsmanlike penalty. Instead of a Seahawks first down near midfield, the Titans got 31 yards for free via penalty. They had 22 yards of total offense in five possessions before that play.

Earl Thomas responded with a tackle for loss, and then Carroll oddly declined an illegal shift penalty that would have moved the Titans back to the 35-yard line and made it 2nd and 20. Mariota managed to complete a 17 yard pass to Eric Decker to pick up the first down on 3rd and 15. Tennessee went on to score the first points of the game via a field goal that started a run of 6 scoring drives in 7 possessions.

The Seahawks lost their grip. Nobody should have been surprised to see the defense give up a late field goal to end the half after the offense finally got going and took the lead with a touchdown. There is some sort of masochistic relationship there, where offensive pleasure must be accompanied by defensive pain. Wilson led an opening drive touchdown after the half to retake the lead, only to see the defense give it right back via a 55-yard screen pass to Rishard Matthews. The pain was just beginning. Pass the ball gag.

As the offense lost momentum with two straight punts, the defense allowed the game to get out of hand. Aided by a poor punt from Jon Ryan and poor coverage, the Titans started their next series near midfield. Tennessee moved at will, gaining at least 5 yards on every play except one where they gained three. Tight end Jonnu Smith ran a wheel route out of the backfield for an easy touchdown when Michael Wilhoite blew his coverage.

Next possession was just one play, but it was a doozy. Seventy-five yards for DeMarco Murray to paydirt. What was a 16-14 game was now 30-14, and was essentially over before the fourth quarter even began. The Seahawks would score two more touchdowns, but ran out of time.

Mariota finished the day without being sacked or being hit. The Titans line started the day being overwhelmed, but finished the day overwhelming the Seahawks. The comments after the game were that the mistakes were assignment related and easily corrected. That is not what I saw.

What happened against the 49ers absolutely looked like assignment mistakes. This was not that.Titans players were hat on hat blocking Seahawks defenders who were unable to get off those blocks. It was terrific blocking, and physically dominating. Sheldon Richardson is rapidly becoming a major disappointment.

He barely showed up in this game, with just 2 tackles. Cliff Avril has been ineffective through three games. Frank Clark has not been anywhere near dominant. Michael Bennett at least had 3 tackles for loss. What was supposed to be the game’s most dominant nickel pass rush has been a major disappointment. They have not dominated anyone. Even the four first half sacks against the Packers came largely due to terrific coverage.

Defensive coordinator Kris Richard sent extra rushers on blitzes during this game to no avail. One can only wonder what someone like Dan Quinn could do with this group.

On the bright side, rookie Shaquill Griffin continues to earn more snaps. He was solid all afternoon. 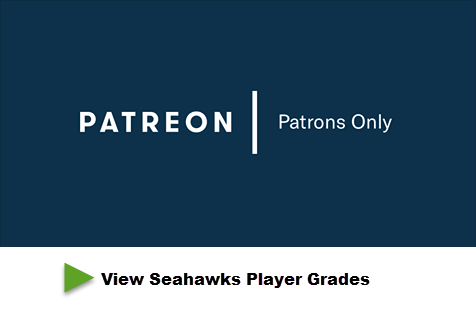 Seattle exits this game 1-2, with an offensive line that is improving but still well below average, a star quarterback who has not played well, and a defense that has allowed a string of game-changing explosive plays. Their three best special teams players are injured, and their return game has been bland. Any team that wants to contend needs their best players to play their best. That did not happen Sunday. In fact, some of their best players are not even playing well. Now they may face time without standout receiver Doug Baldwin who left the game with a groin injury of unknown severity.

This is a Seahawks team missing the mystique and swagger that they worked so hard to earn. Teams know they can abuse the offensive line, and the coaches are unwilling to commit to the run early in games to establish the physical style this team was built on. The distance between where this team wants to be and where it currently resides is vast. There is no clear path between here and there. Before setting out on a journey of this magnitude, it is wise to check supplies.

The offensive line has shown clear progress each week. Team yardage, first downs, and points have increased each week while sacks per dropback have decreased. Their quarterback just set a career high for yardage and rediscovered their tight end. Paul Richardson has made more big plays this season through three games than Jermaine Kearse made all of last year. The defense has all the necessary pieces and experience to recover from a terrible game.

Carroll and the coaches need to create some constants in this equation. Their map is spinning like a GPS in the city. They have one week to get right against the Colts before facing the upstart Rams on the road. Not all who wander are lost, but this season will soon be if the Seahawks do not adjust course.