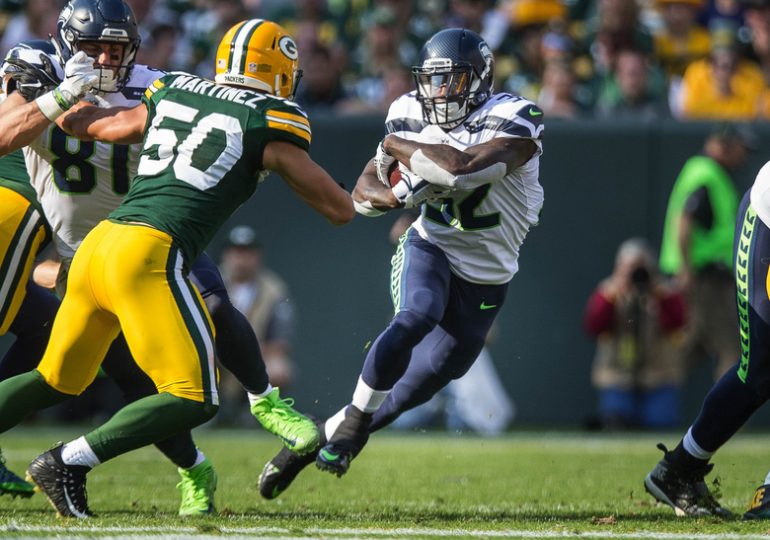 What are some of the best ways to move on from someone? Cry. Yeah, bawl your eyes out. Scream into a pillow. Shout obscenities at the wall. During the initial stages of getting over someone, you may feel miserable. You need to accept these feelings in order to truly release them and move on with your life. Indulge yourself, listen to music, let yourself feel numb, talk things over with friends, keep a journal, limit the amount of time you wallow in grief. Some people handle heartbreaks like they do with depression. Isolation, but put on a show of happiness when in public. Such as finding someone else just to love the feeling. Kind of like how the Seattle Seahawks did after trying to move on from Marshawn Lynch.

Like sticking with your side chick, Christine Michael, but telling him it’ll never work out. “It’s not you Christine, it’s me wanting ball control and protection. There were good times, but there were a lot of bad, bad times.” Then finding the next fling, Thomas Rawls, and in the first year of dating, he’s so good to you, but you realize he’s not stable as his true colors start to come out. Finally, you tell yourself and everyone else that you’re so done with dating, but everyone knows you’re on Tinder and sees you out with C.J. Prosise and Alex Collins. Just to see you making the same mistakes over and over. Everyone wants stability in their love lives, some go find it and most of the time it doesn’t work in their favor. Like calling up Eddie Lacy because he reminds you of your first love, but it will never feel right.

I’m not here to talk about your love life. I’m not the guy you want to go to in any form of comfort in those regards. No, I’m here to talk about how you should wipe your misery clean because love came to the Seahawks and it’s time to introduce this love to the world.

Chris Carson, the man that didn’t have a chance with you, but kept surprising you and exceeding your expectations. Carson was drafted in the 7th round of the NFL draft and at the time, on paper, there was no way you’d think a late round pick could make a group with what the Seahawks thought could be the best RB group they had under the Pete Carroll era. A big, strong back with a good frame who is nothing but explosive. You can’t watch his tape at the professional level and not see flashes. Carson is built like an NFL running back and it’s time to return to their running ways and showcase his skill-set. With Lynch, the Seahawks were a smash-mouth rushing attack, get your opponents to stack the box to defend the run, and then open up the field and take shots deep kind of team. In other words, they retained the passing game off of the run game. Trying to fulfill the role in the backfield where teams had to worry about power rushing and Russell Wilson’s arm has been an experiment, more so on the offensive line. But, I’ll let our staff writer, Nathan Ernst, stick to his strong elements of that position.

Russell Wilson’s numbers are increasing year in and year out. In 2016, he had career highs in passing yards, passing attempts, and completions. In today’s vision of the NFL, it’s clear we live in a passing league. The NFL transformed in the early 2000’s to a passing league, therefore over the years we’ve seen higher and higher overall passing touchdowns from the league leaders. Not only are passing touchdowns are on the rise, but here are some statistics to append. All in 2016, a total of 11,661 points and 1,306 touchdowns were scored, both the third-most ever in a season. Games averaged 700.8 total net yards, the second-best mark in NFL history. The league-wide completion percentage (63.0) tied the previous record (2015) and the league-wide passer rating (89.3) ranked second in league annals (90.2 in 2015). The league-wide interception percentage of 2.3 percent was the lowest in NFL history. That doesn’t come with just rushing the ball, people.

Having a great quarterback in today’s game is important and the Seahawks have that and all, but when Pete Carroll and Darrell Bevell collided for the first time, they had things in common to make an offense gel. Their philosophies lined up well together in wanting an offense of balance. They both strive for pounding the rock. Bevell coming from an organization, the Minnesota Vikings, where he went from Adrian Peterson to coming to Seattle and succeeding with Lynch. What luxury, right? Now, it’s been a year without the luxurious Marshawn Lynch and Seattle’s offense has been stranded in neutral ever since. Despite career numbers from Wilson last year, nothing gels consistently anymore. There’s no identity. It’s time to get back to having a balance attack in Seattle, because Chris Carson looks like the real deal.

Here’s a play where Carson executes a play out of nothing due to more frustration at the helm of the offensive line.
https://streamable.com/rfuof
Trying to create space is nearly impossible here, but Carson uses his ability to see the field and use quick feet plus acceleration to pick up the longest 3 yards in his professional career. It’s hard to sit here and consider who else could make that adjustment as quickly as a running back on this team other than Carson.

The Packers completely shut down the Seahawks run game making it to easy to read Seattle’s offense. Their lack of the passing game and running game made the Packers defense look unbeatable, but in reality, it’s not. Chris Carson had two explosive plays if you count his long 3 yard gain in his 26 snaps at RB, the most among the unit. This 30 yard gain was by far the eye opener for everyone watching this game. For me? It made me think that this kid will make us forget about ever having Marshawn Lynch. Bold, I know.

The manner in which he utilizes his outstanding vision and cuts back for a big gain is the way this coaching staff has been used to in the past with Lynch. One of Lynch’s most underrated attributes was his agility to cut quick. Carson demonstrates that here.

Chris Carson isn’t just a power, zero to sixty kind of back. He’s very athletic out of the backfield, too. He flashed some separation on routes in the preseason and his hands have been reliable. On a play needing a first down, the Seahawks roll out Wilson to dish it off to Carson for a first down.
https://streamable.com/1bp4n
Chris Carson looked every bit of the preseason hype and it carried into his first game as a rookie in the regular season. He had some meaningful snaps against the Packers and he produced. I expect heavy involvement going forward.

The success of the running game plays a big role in the Seahawks passing game. Wilson used a play-action fake on a league-high 34 percent of his drop backs, and his quarterback rating jumped 17 points on those throws in 2014. The philosophy of Pete Carroll is that to accomplish the grand, you have to focus on the small. Just like a relationship, the small things matters. The little things, right? It’s time to get back to running the ball and identify this offense, because it’s too talented to waste time. Chris Carson is here to make Seahawks fans forget about Marshawn Lynch.