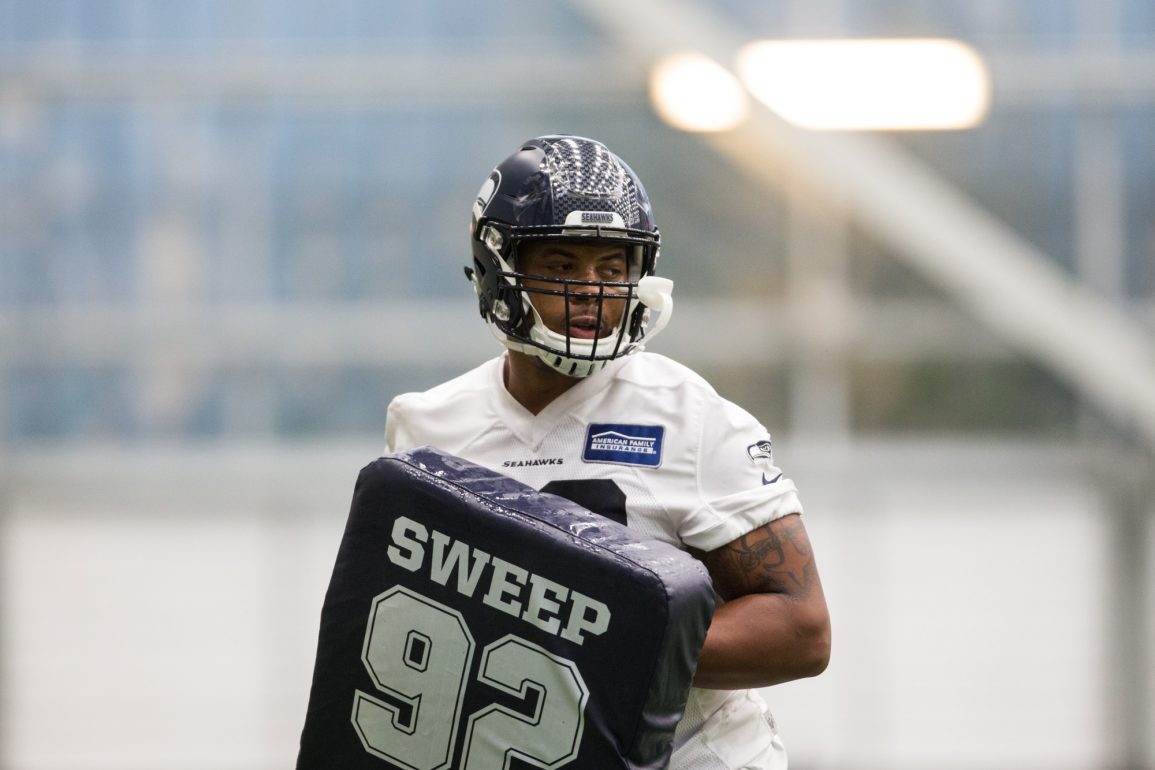 What needs the right care and needs to be cut and polished in order to achieve its potential? Give up? A diamond in the rough. When you find a diamond in nature or in the rough, you take care of it. You ensure the shine retains its longevity. Because if it isn’t shining, it doesn’t sparkle. It seems like almost every other year or so, the Seattle Seahawks find a new diamond to polish and display it for the world to see. The list is almost longer than all the quarterbacks the Cleveland Browns have started over their existence. Okay, okay, I’m exaggerating a little bit. Basically, Pete Carroll’s beautiful mind doesn’t age, along with himself.

Carroll has turned an organization that was once on the edge of a cliff into one of the most dominating teams ever assembled in the history of the NFL. Cutting fan favorites to find and formule players that no team would take a chance on and turning them into all-pros that go on to shine like diamonds throughout the course of their careers. Has every year been successful in finding diamonds? No. The term “in the rough” wouldn’t have the meaning it does without rarity. This particular diamond I’m about to introduce to you wasn’t found, it was stolen.

Yes, the steal of the 2017 draft class could be Nazair Jones. Who? Nazair Jones. I’m here to make sure that name is embedded into your head because you’ll be hearing that name a lot throughout this season. For all of you who are new to my work, I wrote about someone you may have heard of before, Tyler Lockett. My words exactly were, “could be the steal of the 2015 draft.” Coincidentally, like Jones, Lockett was also drafted in the third round.  Now that I have your attention, let’s get to know Nazair Jones and breakdown what he will bring to this team.

What I’ve learned about Jones while spending my time studying him is that, like most athletes, adversity strikes like Randy Johnson’s fastball strikes a mitt in his prime. If you aren’t aware, Jones suffered from the extremely rare Complex Regional Pain Syndrome (CRPS). Here’s a kid who loses complete control, drops a lot of weight and must learn, like a newborn, how to walk all over again. One day, in 2011, Jones woke up and could not move. It happened just like that. Now, he plays for the Seattle Seahawks looking to continue his amazing road to resilience.

More of what I learned about Jones is the Eiffel Tower of leadership and energy he brings to a team. One thing that stood out to me before a football was even snapped was his pregame ritual of some sort. Jones would bring out a huge chain out with him when the team was being introduced out of the tunnel. 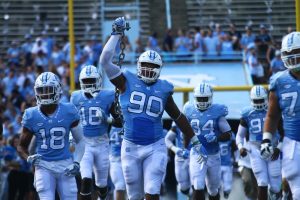 I had to go digging to find out if it had some sort of meaning. I found it and, man, it’s every mindset you want in a locker room. 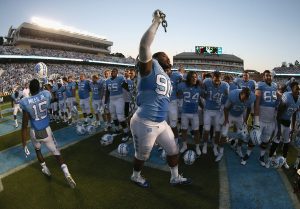 North Carolina’s head coach, Larry Fedora, told his players that they needed to be a strong unit together. So Jones decided that the best way to demonstrate and execute their unity was if him and his teammates were linked in a chain. “Basically unbreakable,” says Jones. I know, you got goosebumps, too? Also, he started his own foundation called MADE Men Mentoring, a non-profit that aims to provide a support system for underprivileged young men in North Carolina by pairing them with college student-athletes who will mentor and support them in the areas of academics, competitive athletics, and manhood. Are you loving the kid so far or what? He brings the right mentality that every coach wants and every fan chooses to fall in love with. But can he bring the skill-set?

“Naz” a nickname he goes by, is a 6’5″ ton of man who is primarily known to plug up holes and stuff runners or anything and anyone who tries to run past him. He’s nothing but strength, very physical. If he gets a hold of you, it must feel like quick sand for opponents because you’re not getting away from him.

There’s a lot of talk going around about what kind of player Jones is. What did the Seahawks draft him for? To mainly beef up the run stoppage? Knocking blockers from the play? There’s no doubt about his size and what he brings internally. He attracts a lot of attention in the middle of the line. However, there’s more to Jones then just a middle man. He’s a lot more versatile than you may think. His hands are quick and he flashes athleticism at times.

In Jones’ first action as a professional player, the Seahawks used him like they mostly use all their defensive linemen depending on situations. Up front, the Seahawks try to get the best of both worlds. While Seattle uses a base 4-3, it also incorporates many elements of the 3-4 as well. However, they are known to be a 4-3 defense. “4–3 defense is a defensive alignment consisting of four down lineman and three linebackers. It is a called a ‘base defense’ because it is the default defensive alignment used on ‘base downs’ (1st and 2nd downs).” Like I stated, defenses will readily switch to other defensive alignments (such as a nickel) as circumstances change.

When the Seahawks know the opponent is in a passing situation, they go to their nickel defense. They often sub out one of the bigger linemen for a smaller one who might be better at rushing the passer. Let’s show some tape on how the Seahawks are experimenting with Jones.

Jones is lined up playing the 4-tech, otherwise known as the defensive end (DE) on this play.

Jones shows everything you want playing this technique. He gets off the ball quickly, attacks the outside shoulder of the left guard, puts a little swim move on him that is done beautifully and overpowers him with the strength he embodies. With the pressure created, he almost forces a turnover. This play alone gives us a taste of Jones’ pass rush ability that everyone is so easy to knock off.

Once again, Jones is playing the 4-tech on the weak side, but plays it knowing it’s a run. One way to know you’re a smart player, in this case playing a defensive line position, is you want to get a feed off the body language of the offensive line. If the offensive lineman drives out and tries to move the DE, it’s most likely a running play. In this case, the defensive end will fight pressure with pressure.

Jones easily does what he does best and squeezes down the gap and shuts down any chance for a run to bust open. He does more than just plug up a hole here, he shows his athleticism and flashes to the ball carrier for a loss. Jones is typically known for getting to the ball carrier for any type of loss. Back in North Carolina, Jones finished his collegiate career with 21.0 tackles for a loss.  In one year alone, his junior season, he recorded 9.5 tackles for a loss.

A great DE has strong legs and quick feet. He’s generally tall, allowing him to get to the quarterback or at least to disrupt the throwing lane. Again, here he is playing DE, but the strong side this time. This play should’ve had nothing to do with Nazair Jones playing this Tech.

The Chargers are going screen here on the opposite side where Jones is lined up. The Chargers pickup a great chunk of yards here, but notice Jones being the first to tackle the speedy running back. Ridiculous how a body like his gets from point A to point B.

Speaking of disrupting a throwing lane. If you can’t get to the quarterback, you’re most likely taught to put your hands up and try to get a hand on the ball. Well, Jones does just that here. You hope that if you get a hand on the ball, you turn around and see your teammates running towards you. Jones had 12 passes defended at UNC.

One thing I notice about Jones is that he’s aware of what’s going on in front of him. His eyes are always locked behind the guy trying to block him. While trying to create pressure, notice his eyes are glued to the quarterback. He times the pass perfectly and creates the turnover.

Remember when I told you that if Jones gets a hold of you, you’re going down? Lets show some of Jones playing inside, his primary position. I promise you, if Jones has a one-on-one block, he will beat you almost every time. One of Jones’ great measurements is his arm length (34 5/8″.) He has long arms and his punch has some bolt to it.

This one is as simple as it looks. David Bass does a great job at creating pressure and forcing the quarterback to escape, but trying to escape is another thing, too. Jones shows quick feet, strength, keeps his eyes downfield and uses that length to record a sack.

Lastly, here Jones is lined up inside again. The quarterback runs a play action bootleg and every single defender except Jones gets fooled. Look how fast he recovers after realizing it’s not a run.

Nazier Jones is having a hell of a preseason so far and is showcasing the instant impact he can make for this football team. He’s NFL ready and he’s going to need to be after finding out Malik Mcdowell will not play one single snap this season, or if he’ll play again at all. Who knows? No one does. Jones can provide what everyone thinks Mcdowell could. I’ve shown you during this breakdown, it’s evident. Jones knows how to step up and fight, he’s fought before and won. He defines adversity, brings the work ethic, and demonstrates desire. He has the versatility, physicality, leadership, energy and is the definition of a winner, in my opinion.

This kid shows out on game days, you can’t watch a team he’s on and not notice him. What shines after you polish it? A diamond. 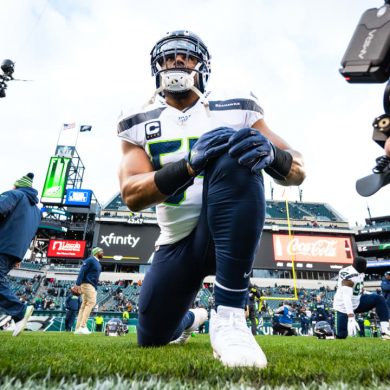