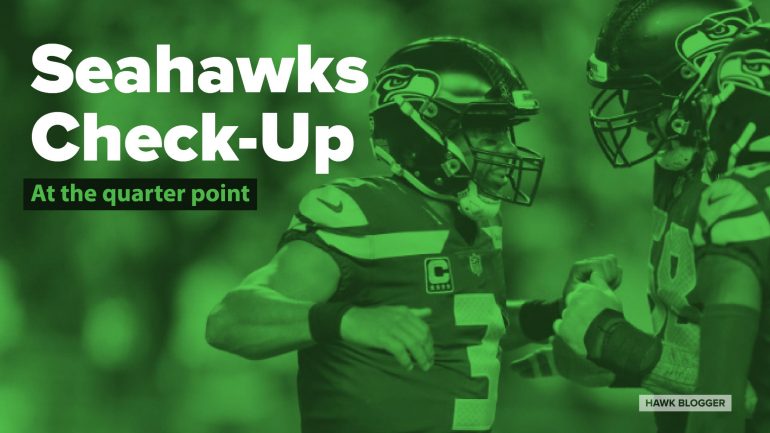 Seahawks Check-Up at the Quarter Mark

I am an emotional guy. The Seahawks win and life is lollipops and rainbows. The Seahawks lose and the rain is a little wetter and the days a bit shorter. That kind of fluctuation can make it hard to stay objective. It is why I always return to the numbers and put those numbers in context. That helps keep me honest and avoid blindly going along with the dominant narrative or my irrational feelings. Something I have done the last few years is take a snapshot of how the team is doing after each quarter of the season. It helps assess where they are relative to where they were, and often highlights some muted trends that would be hard to otherwise identify. Here we are, a quarter of the way through this 2017 season, ready to see how the team is progressing.

This is the percentage of plays that were runs. Seattle had regularly been a team that ran the ball more than 50% of the time, but has steadily dropped off and cratered last season with runs on only 38% of their plays. Carroll preaches balance on offense, and wants a physical running game to be part of how they “complete the circle” of toughness.

Carroll tells everyone “It’s all about the ball.” That references both takeaways and giveaways, but my analysis was that takeaways are where things have really dropped off, and specifically, interceptions.

Another point of emphasis for Carroll is explosive plays. He wants to create them and prevent them. The team has created fewer explosive plays recently and allowed more. That needs to change.

The Seahawks are at their best when all three units on the team are working together. Carroll values a special teams group that can flip the field. That fell off last year. As you can see, the Seahawks are doing better than last year in three of the four metrics, but are not at target in any of them. It is encouraging to see the uptick in rush percentage, but the team has struggled to establish the reliable rushing attack they need and want. Their last game against the Colts was a strong step forward. One indicator of the coaches confidence in their run game is their willingness to run on 3rd and short.

The Seahawks have passed the ball on half of their 3rd and short (3 yards or less) plays this season, but have run in 6 of their last 8 such situations.

As Morpheus once said, “He’s starting to believe.” This game against the Rams could go a long way toward validating that burgeoning belief or quashing it.

Interceptions are slightly improved, but are a long way from target (3%). This pass rush started to finally show up against the Colts and needs to be more disruptive. I also see Shaquill Griffin and Justin Coleman as part of the solution here. Jeremy Lane has not been as effective at creating turnovers during his career despite having a few memorable ones.

The explosive play differential is up sharply, although still below the +2.5 per game target. This is mostly due to a decrease in opponent explosive plays, which may seem odd given the big plays the Seahawks have surrendered this year. That is because Seattle has actually given up a much higher rate of explosive running plays compared to last season, but they have reduced explosive passes to just 3 per game. That is a great sign.

Special teams is incredibly disappointing. Some of this relates to injuries, but the punt return game has also been suboptimal. Jon Ryan has been just okay, as has been the case for the last two seasons, and punt coverage is nowhere close to what it needs to be. There is really no excuse for a team with the young depth of Seattle to be this poor on special teams. Guys like Delano Hill, Amara Darboh, and others need to step up and make an impact.

Another area I will be watching this season is how Wilson is able to perform during key situations like 3rd down and in the red zone. He was at his best in 2015 when he dominated this type of situational passing. These numbers are not solely on Wilson. The offensive line, play calling, and his receivers play a large role. Still, these will be important bellwethers as we monitor his growth as a quarterback.

The results have not been encouraging thus far, but Wilson completed 6 of 7 passes on 3rd down in the Colts game, and would have been 7 for 7 if not for a dropped pass by Jimmy Graham that resulted in an interception. Five of his six completions resulted in first downs.

It is useful to compare one four game stretch to another. When we check back in at the halfway point, we will compare the next four games to these first four. For now, we look at the first four from last season. I like to look both at the absolute numbers and the relative by using NFL rankings. You will see in some cases the Seahawks have made minor absolute improvements (+4.3 yards per game on offense) but larger relative moves (up 6 in yardage rankings). That tells me offense is down in the NFL through four games this year compared to last year. Lots of red indicates the team has dropped off in most areas compared to where they were last season when they started 3-1. Their level of competition has been steeper this time around with games at Green Bay and Tennessee. They had the Dolphins, Rams, 49ers, and Jets last season. There are some encouraging improvements on offense, especially in the running game. It is also great to see a small jump in 3rd down conversions. While the defense has a lot of red, some changes are pretty minor like giving up 1.0 more passing yard per game. The decline in rush defense is the most obvious, but slide in points per game allowed is more disconcerting. On the plus side, the red zone defense has started out great, and the pass defense looks pretty darn good. A few more interceptions would go a long way.