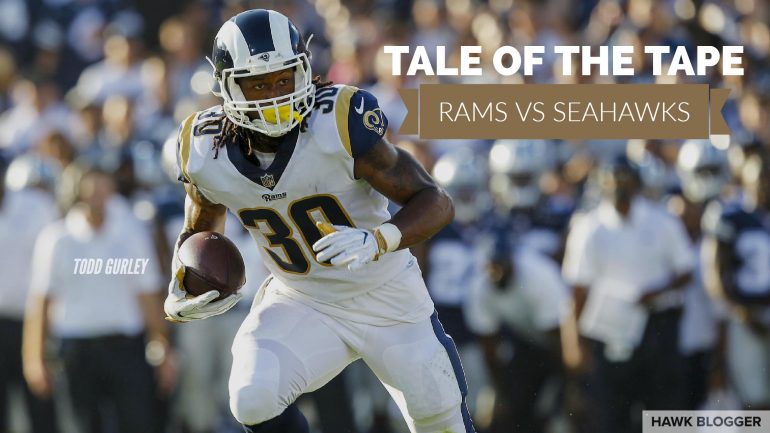 The road leading to this game has been winding for the Seahawks. Even the path they traveled in their last game was treacherous. The Rams enter with confidence earned through week after week of stellar offensive performances, and a young core that is seeking elite competition to discover just how good they can be. We are closing in on two decades of history between these two division rivals, dating all the way back to The Greatest Show on Turf. This has the feeling of a new chapter that may not adhere to the old rules. Seattle must play their most complete game of the season to exit with a victory.

While most of the attention the Rams have received has been about their breakout offensive numbers, their defense has been incredibly disappointing. Wade Phillips has turned team after team into a defensive monster, and has tons of talent to work with in Los Angeles. Aaron Donald held out through training camp and had a rough first game, but has been his normal wrecking ball-self since then. Most recently, he made the celebrated Cowboys offensive line look like rag dolls. That has not been enough to keep Los Angeles from hemorrhaging points and yards. In fact, the Rams have been worse on defense over the past three weeks than they were in that first game when Donald struggled to make an impact. They rank 31st in points allowed and yards allowed in those three weeks.
Seattle exploded for 46 points in their last game, after scoring 20 in the second half against the Titans. They have the look of a newborn colt learning how to walk, and then to run. There is no question this group is significantly better and more confident than the one that started the season in Green Bay, but this is the game where we learn if they can grow into a stallion. Donald and his brethren on the defensive line, especially Michael Brockers, have wreaked havoc on the Seahawks offense for years. Gone is troublesome dinosaur denier William Hayes, who sacked Russell Wilson 7.0 times in 11 career games against the Seahawks. He was casualty of the team’s transition to a 3-4 defense that required different kinds of defensive linemen. Still around are Donald, Brockers, and defensive end Robert Quinn. Since recording 19.0 sacks in 2013, Quinn has seen his sack numbers decline each year as he has battled numerous injuries. He will be licking his chops at the opportunity to go up against either an injured Rees Odhiambo or perhaps replacement Matt Tobin.

Odhiambo has improved along with the rest of the line, but is still among the least consistent left tackles in the NFL. Ethan Westbrooks got removed recently as a starter because the team believed he was giving up too much against the run, but is still a part of their fearsome pass rush. Alec Ogletree is a terrific athlete, who has proven capable of running down a scrambling Wilson multiple times.

This is a tough team to face on third down.  Nobody has complete a deep pass down either sideline against the Rams on 3rd down all year.

Los Angeles has the tools they need to cause Wilson to break out of the pocket and force some poor decisions. That is why they are 4th in the NFL in sack rate, 7th in interception rate, and 4th in takeaways. Sacking Wilson is a given. If they can force a turnover, this game becomes far less likely to end in a Seahawks victory.

Tyler Lockett has been a Ram killer early in his career. His 18 receptions in 23 targets for 296 yards is the most against any opponent. That includes 4 catches in 4 targets for 99 yards in the game in Los Angeles last year and 7 catches in 8 targets for 130 yards against the Rams in Seattle. He is coming off his best game of 2017 where he flashed some of his big play ability. He will be a key in this game as Doug Baldwin is still recovering from a groin injury, and the Rams tend to struggle on Lockett’s side of the field.

Trumaine Johnson helps limit damage on the right side of the field. Wilson has historically been his best throwing deep left. Much of the damage Lockett has done is deep left. Look for the Seahawks to try and exploit Lockett against the left side of the Rams secondary.

It is important to make your living on first down against the Rams. Third and long situations play into their strengths as a vicious pass rushing squad. Take a look at how opponents have done throwing the ball on various downs against the Rams this year:

First down has been unkind to the Rams. They have surrendered tons of yards in those situations, and rank 26th in the NFL in yards allowed on first down.

You might be surprised to know the Seahawks offense ranks 6th in the NFL in first down yardage on offense.

This may not be the game to run the ball on first down. Seattle is likely to see the least aggressive Rams pass rush in those situations. Los Angeles has allowed a ton of explosive plays, ranking 26th in explosive passes allowed and dead last in explosive rushes. The Seahawks will attack the Rams with guys like Lockett and Paul Richardson deep, but don’t be surprised if lesser known guys like Amara Darboh and Tanner McEvoy get some chances to make big plays.

How the team decides to handle snaps with C.J. Prosise and J.D. McKissic is something to watch as well. Prosise did not play in either Rams game last year. I really like how Thomas Rawls could influence this game. He will be hungry to prove his worth on every snap. There was a time when he was the most explosive runner in the NFL during his rookie year. This would be a great game to revisit those days.

This is an incredibly talented Rams offense. Their biggest weakness is inexperience in the league and with each other. Seattle’s defense has been disciplined, but not dominant thus far. They will need to play their best game of the year to slow down the top-scoring offense in football. They own the advantage pretty much across the board, but the biggest is their pass protection. Helped by free agent acquisition Andrew Whitworth at left tackle, the Rams offensive line is not the joke it has been the past few seasons. Seattle’s vaunted defensive line has generated far less pressure than everyone expected. That changed in the second half against the Colts, giving Seahawks fans some hope that group is starting to gel.

Goff has not had a game where he has been sacked more than twice so far.

Frank Clark and Marcus Smith appeared to give the pass rush a boost last week, and will need to do it again this week. The passing game may not be where the Rams have their biggest advantage. Todd Gurley is arguably the best back the Seahawks have faced thus far, and they have already given up tons of yards on the ground to lesser players. One of the keys to this game will be if McVay decides his main opportunity is to gash the Seahawks on the ground with Gurley. That could wind up being a critical strategic mistake if the Seahawks run defense has indeed corrected their mistakes. It comes down to whether Seattle really is one of the league’s worst run defenses or if the problems thus far have been an illusion created by a few fundamental mistakes from a relatively new group up front. Either could be true.

Gurley is going to be a central figure in the outcome of this game either way.

Despite the gaudy numbers, Rams quarterback Jared Goff has yet to prove himself against a great defense. They have faced the 18th, 24th, 26th, and 32nd ranked defenses in points allowed, and the 14th, 19th, 20th ranked defenses in opponent passer rating. They did face the 11th ranked Colts defense in passer rating, but that is hardly a group to fear. Interestingly, Goff has a modest rating from ProFootballFocus.com that has him ranked 13th among quarterbacks thus far.

Goff and the Rams rely heavily on the clever schemes of new head coach Sean McVay to create open spaces for Goff to throw into. Seattle’s defense is tough to move around as they have a simple scheme that they play with great discipline. Goff and his receivers will be forced to win their matchups.

Goff prefers to throw down the right side of the field. That either means Richard Sherman will get more opportunities to make big plays or that Goff will need to go away from his comfort zone. This would be a great game for Shaquill Griffin to take the next step in his development and create a turnover. The Rams love to throw deep. They are tops in the NFL in yards per attempt. Seattle has been terrific at defending the deep ball.

The Seahawks also have excelled in the red zone, ranking 2nd in the NFL in that category. This game could come down to a few possessions where an offense has to settle for 3 points instead of a touchdown.

It would be ideal if Neiko Thorpe could return for this game. The Seahawks special teams have not been the dominant group they were set up to be, due in part to injuries to their top three special teams players. D.J. Alexander returned last week and Thorpe could be back this week. The Rams feature arguably the best kicking tandem in the league. They have a distinct advantage in flipping the field and converting field goals. Jon Ryan has to step up.