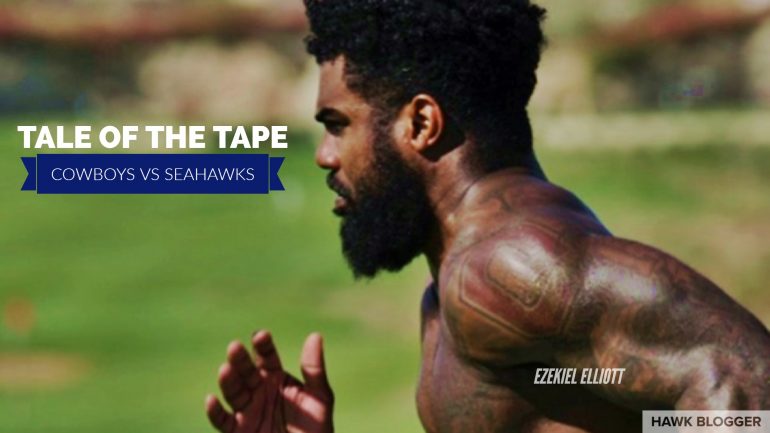 Tale of the Tape — Ezekiel Elliott and Cowboys Licking Their Chops

The Seahawks played one of the worst games in franchise history last week, and now get to travel to Dallas for Ezekiel Elliott’s return to the Cowboys. Todd Gurley barely was touched most of the day as the Seattle run defense was absent. This game will not be close if the Seahawks look anything like that when Elliott lines up in the backfield. He has stated an expectation that he is going to run for over 200 yards in his first game back. That is not out of the question.

This Dallas offense has been completely different without Elliott these past six games. There have been some other factors, but he is clearly a major part of how this team functions and will be back with a point to prove in front of his home crowd. It is unclear if the Seahawks have enough motivation or ability to stop him. 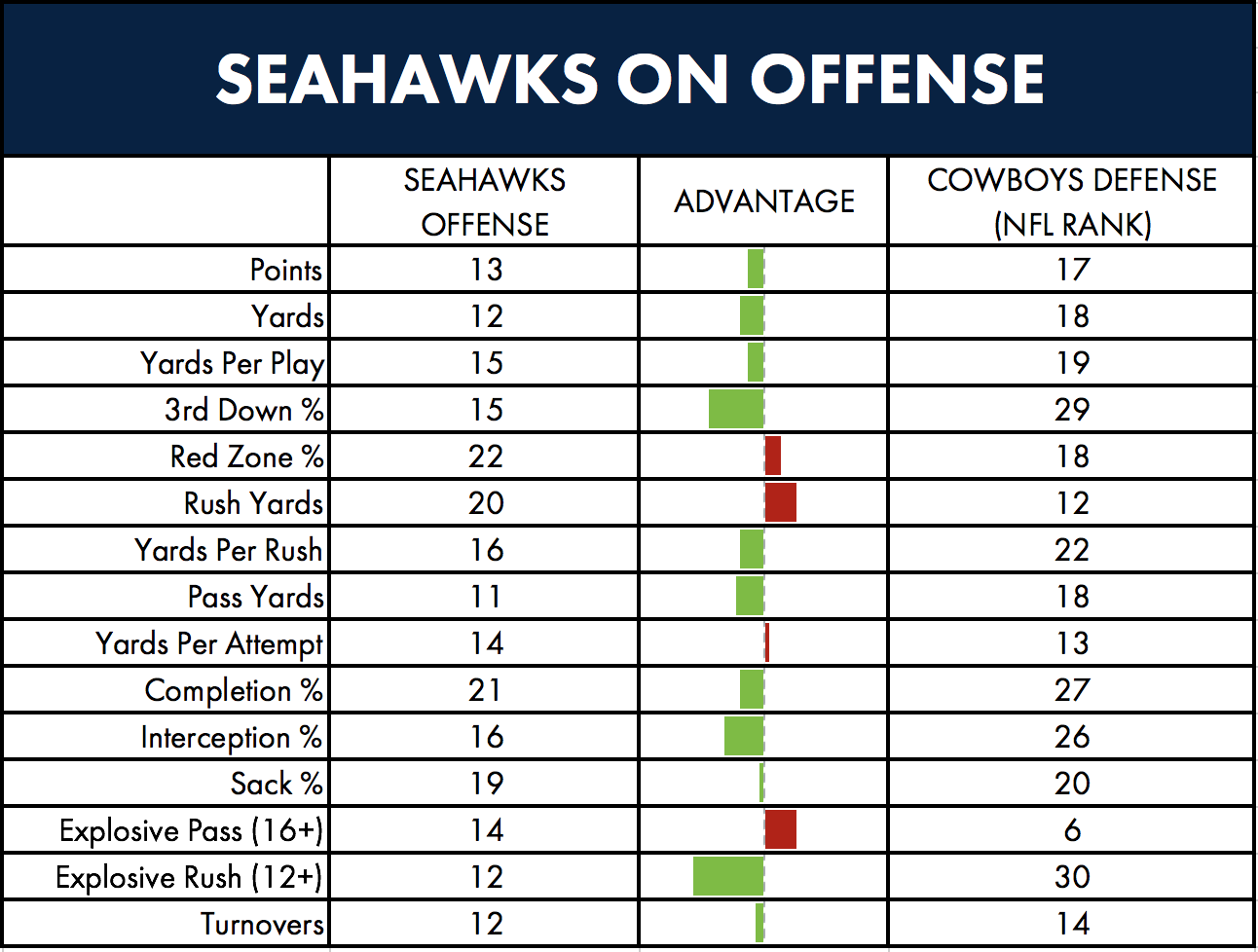 Something strange has happened to the Cowboys offense during Elliott’s absence. They went from ranking 3rd in the NFL in sacks to ranking 31st. They have only 5 sacks in the past 6 games. Elliott was not the only player out. Linebacker Sean Lee has missed a few games due to injury, which may have led to fewer obvious passing situations. Defensive end Demarcus Lawrence had 10.5 sacks through eight games, but just 3.0 in his past six. It is a bit hard to know if Elliott’s impact on the offense will unlock the pass rushing that has been missing on the Cowboys defense.

Lee is an elite linebacker when he is healthy. He hunts out backs in the running game and is solid in coverage. The Cowboys starting corners are both decent, if not dominant, players.

Russell Wilson should give this defense fits when he scrambles. They are not athletic enough on the defensive line to keep him contained. Seattle receivers should have the advantage, especially Doug Baldwin in the slot. Expect a big game from Wilson and Baldwin. This may also be a game where Jimmy Graham and the tight ends play a central role. 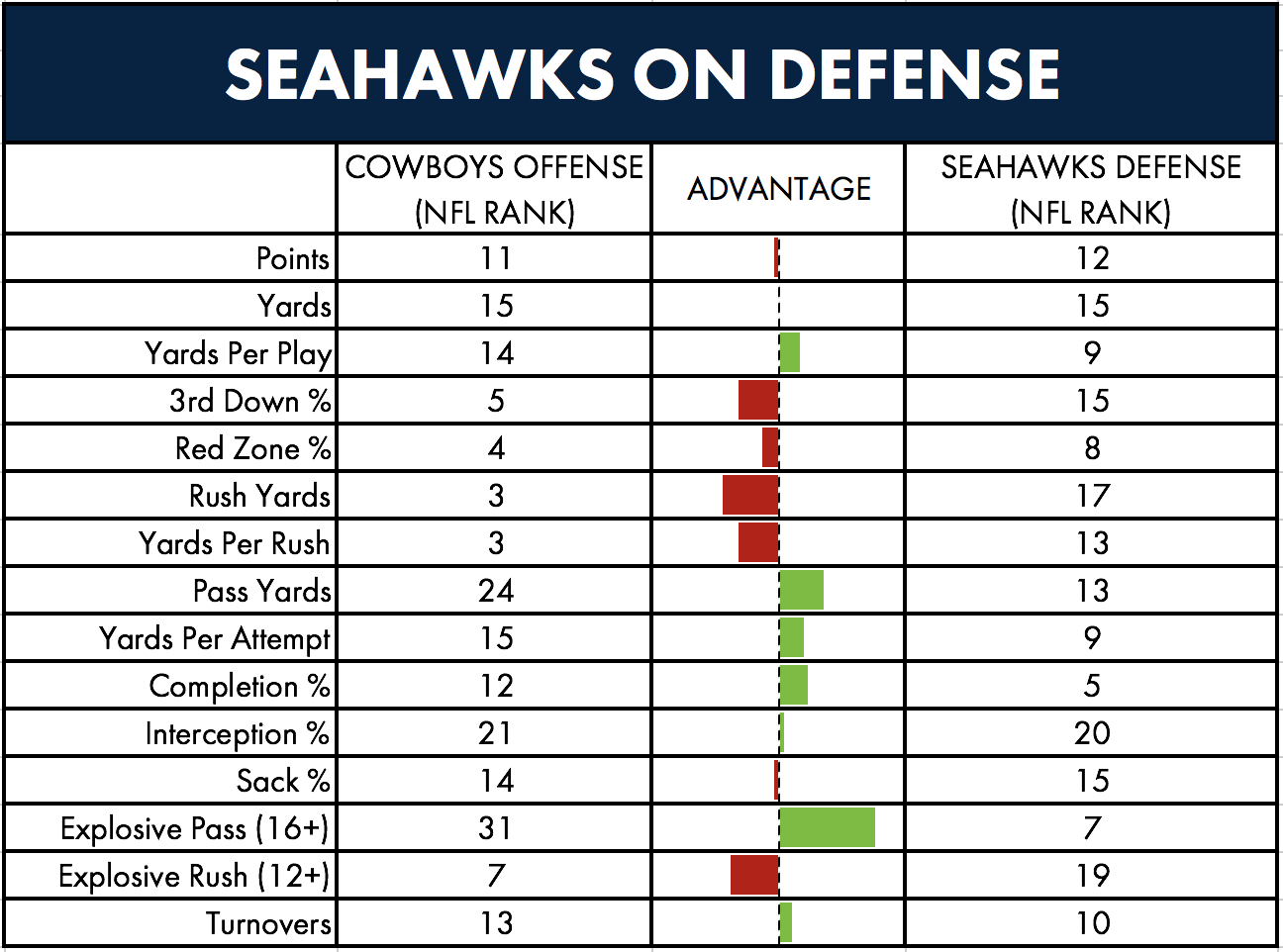 The chart above is misleading based on the impact of Elliott being out for six games. This is a balanced and powerful offense when he is in there. Seattle will need to completely reverse the trend of the past two weeks in defending the run to keep this team from controlling the ball and piling up yards and points. This is not an offense that relies on explosive passes. Seattle’s defense is designed to limit those types of plays. That tends to indicate the Cowboys offense is well-suited to beat this Seahawks defense.

Dallas may be missing their best offensive lineman in left tackle Tyron Smith. That would leave someone like Byron Bell to take over. Both Bell and right tackle La’el Collins are vulnerable in pass protection. Frank Clark and Michael Bennett should have major advantages to exploit.

The Cowboys have been very productive in punt returns this season, and the Seahawks have been a total disaster the past two weeks in that regard. Seattle does not have enough advantages elsewhere to overcome another porous game on special teams.