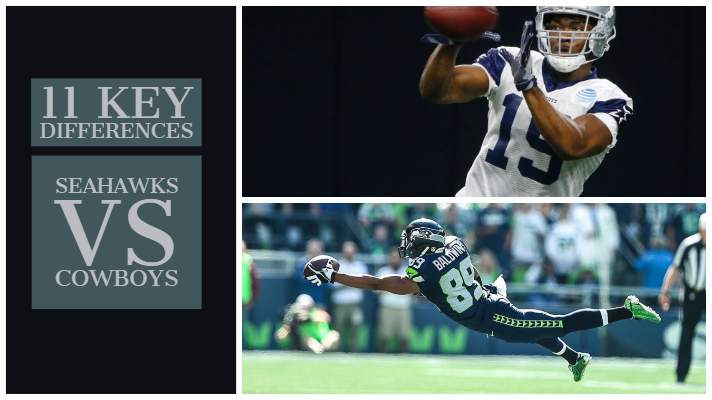 11 Key Differences for Cowboys and Seahawks Since Week Three

Looking at previous head-to-head matchups is the first thing most analysts will do when assessing a new contest. The closer a rematch is to the original game, the more relevant any lessons learned might be. However, as evidenced by the Seahawks 43-16 victory and 26-23 loss to the 49ers two weeks apart, previous games are hardly guaranteed to predict future outcomes.

You can be sure Cowboys fans will be emphasizing every key difference from their week three loss to the Seahawks that reflects positively on their chances this Saturday, while Seattle fans will focus on the things that remain the same from their comfortable victory. As objectively as possible, here are the differences that both sides should acknowledge and interpret.

Dak Prescott was intercepted twice in the first game. Both came at the hands of Earl Thomas. Thomas played an amazing game in what was likely his last full game in a Seahawks uniform. ProFootballFocus (PFF) had him as the highest-graded defender for Seattle (91.1/100).

Seattle has been without Thomas since week four, and mostly relied on Tedric Thompson to fill his All-Pro shoes. Of late, Delano Hill has stepped in after Thompson was injured.

Thompson played just 12 snaps in the first matchup, and Hill played none. This represents a massive change from the first game, and one that favors the Cowboys.

The young and ultra-talented Amari Cooper was acquired by the Cowboys in week nine, well after the first game against Seattle. Since then, Cooper has graded out as the Cowboys best offensive player by PFF.

Some of those snaps went to Michael Gallup, who went from 42% of the snaps against the Seahawks to 79% of the snaps in week 16, but Cooper is the real game-changer, and represents a large upgrade over the players Dallas ran out there in the first game.

Doug Baldwin is back

While everyone will talk about Cooper, you are unlikely to hear anyone in the national media mention Seattle’s most talented receiver did not play in the first game. After battling a variety of ailments all season, Doug Baldwin Jr. has found his groove. He finished with four touchdowns in the final five weeks, and was the fourth-best receiver in football over that span, per PFF.

That first game saw Brandon Marshall get 62% of the snaps on offense, Jaron Brown get 72%, and Keenan Reynolds get 23%. Marshall is no longer on the team (or in the league), and Brown played just 19% of the snaps in the last meaningful game Seattle played in week 16.

Baldwin’s return, plus the increased role of David Moore, represent a significant and positive difference for the Seahawks.

Week three represented the game where the Seahawks flipped the switch to a run-first offense. They had been rushing on 34% of neutral script situations in the first two weeks, and changed to 65% in the weeks that followed.

They struggled to run effectively against a very good Cowboys run defense, but there were two key missing elements. The first was that Seahawks center Justin Britt missed the game and was replaced by mighty mite Joey Hunt.

While Hunt is a capable pass blocker, he is limited in run blocking. Britt is literally and figuratively central to the Seahawks rushing attack. His combination blocks with guards D.J. Fluker and J.R. Sweezy have been a staple for the Seahawks top-ranked rushing offense.

Seattle averaged roughly a yard less per carry on runs behind center in the Dallas game than they did in every game Britt played since. This is a significant positive change for the Seahawks.

The second major factor in the Seahawks rushing attack has been the play of George Fant as a tackle-eligible tight end. Fant has played about half the offensive snaps in the second half of the season as what amounts to a sixth offensive lineman. He did not play a snap in the first game against Dallas.

Fant is the second-best lineman on the team, and the best run blocker, per PFF. As good as Dallas is against the run, they have not faced this heavy package that has been key to Seattle’s rushing attack.

Most Seahawks fans probably have never heard of either Blake Jarwin or Dalton Schultz. Jarwin played just 20% of the snaps in the first game against Seattle and had only one target for zero catches. Schultz did not play at all.

Jarwin is the wild card, though. A promising prospect since joining the team as an undrafted free agent last season, Jarwin had what might be his breakout game in the final week of the season. He finished with 119 yards and 3 TDs against the Giants.

Jarwin had not had more than 56 yards in any previous game, and had not scored a touchdown. That might just be an outlier game in a meaningless situation, or it might be a very timely metamorphosis for Dallas.

Either way, the Cowboys are more dangerous and more effective at tight end than they were in week three.

This one is interesting. Linebacker Leighton Vander Esch has been one of the best rookies to enter the NFL this season. He played 48% of the snaps in the first game against Seattle, and now plays every snap. That represents a potential advantage for the Cowboys.

The man he has largely replaced, though, is Sean Lee. Lee had a heck of a game against the Seahawks. He played 52% of the snaps, and led the team in tackles with 11, had a half-sack, and 1.5 tackles for loss.

Vander Esch has 10 tackles and 1 tackle for loss. No doubt Vander Esch is a great player, but will he double his production with double the snaps? That’s hard to say.

While this represents an important difference from the first game, it likely will be overblown given Vander Esch played a lot in the first game, and it will be difficult for him to match the numbers he and Lee posted as a tandem just by playing more snaps.

K.J. Wright in, Mychal Kendricks out

The man who was taking many of his snaps, though, in that first game was Mychal Kendricks. Kendricks had 6 tackles, a sack, and a couple of quarterback hits against Dallas.

His speed and production will be missed. Wright and Kendricks are very different linebackers, which makes it hard to say whether this will be a net positive for Seattle.

Dallas fans should know the name Poona Ford, as he was a standout for the University of Texas. What they may not know is that Ford has quietly earned more and more snaps in recent weeks.

Since starting to get regular playing time in week 13, Ford ranks third among all defensive interior linemen with a 91.2 grade, per PFF. Only Aaron Donald and Grady Jarrett rank higher in that stretch. No defensive tackle ranks higher than Ford’s 92.2 grade in run defense over that span.

Ford could be a key addition to the Seattle defense nobody will be talking about.

Maliek Collins will play this time

One of the Cowboys starters at defensive tackle did not play in the first game against Seattle. Maliek Collins was out, and will be available this time. Collins is not a world-beater, and his absence largely meant more snaps for other starting guys like Tyrone Crawford, but his availability gives the Cowboys a better rotation at defensive tackle.

Rookie defensive end Jacob Martin did not play in the first game against Dallas. He is nowhere near the factor that some of these others players are, but he is capable of making the one play that changes the game.

Martin has emerged as the Seahawks second-best edge rusher after Frank Clark, and over the past four weeks of the season, Martin was the 9th best edge rusher in the NFL, per PFF (min 50 snaps).

Zach Martin and Tyron Smith as the Cowboys two best offensive linemen and they played the whole game against Seattle in week three. Both were held out of week 17 as precaution while dealing with injuries, and both are expected to play this week. Their relative health could represent a meaningful change in this game.

Sweezy hurt his foot in the Kansas City game in week 16, and did not play last week. Pete Carroll has said it typically takes 3-4 weeks for this injury to heal, and they hope Sweezy can do it in two. His status is iffy at best, especially given one less day of recovery with a Saturday game.

Assuming he does not play, Ethan Pocic will step in and is a massive downgrade from Sweezy.

Tyrone Crawford may not play, or may not be fully healthy

It was a scary moment when Crawford was carted off the field with his neck stabilized a few weeks ago. Amazingly, he is on track to play in this game. Crawford is the fifth-ranked starter on this Cowboys defense per PFF, and either his absence or ineffectiveness due to injury could lead to an advantage for the Seahawks run game.

While there are absolutely lessons to be learned from the first game these two teams played, these represent some massive changes since that game occurred.

Dallas did a great job slowing down the Seahawks rushing attack, but Seattle was missing two key aspects of their offensive line.

Seattle did a great job slowing down the Cowboys passing game, but Dallas has added weapons and the Seahawks have lost important secondary talent.

Names like Thomas and Cooper and Vander Esch will be discussed a lot in the lead-up to this game as major changes. Guys like Baldwin, Fant, Jarwin, Collins and Ford may wind up representing at least as large of a shift.