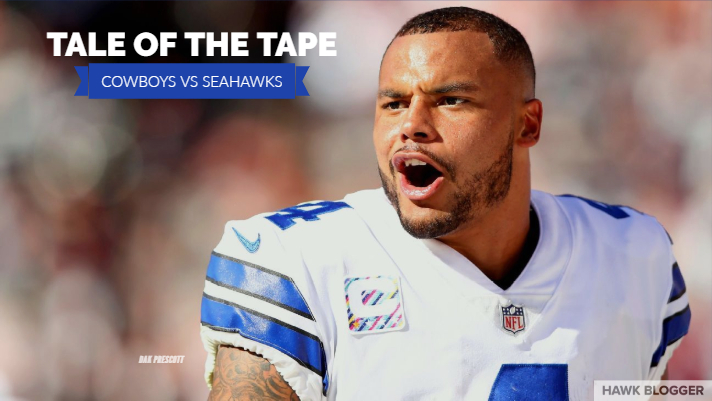 There is a myth associated with the playoffs that the best teams win. That is probably truest when judging the Super Bowl, where two teams meet on a neutral field. Seahawks fans know better than most how significant home field can be in the playoffs.

How else does a 7-9 Seattle team topple a reigning Super Bowl champion Saints team in the 2010 playoffs? Interestingly, there are no gripes this year about the Cowboys getting home field for this game due to technicality of being a division winner despite Seattle holding the tiebreaker with a head-to-head victory.

Seattle and Dallas are evenly matched teams. Even after the acquisition of Amari Cooper and some other changes, the Seahawks are the better team when looking at the underlying analytics. DVOA, EPA, FPI, all agree. Even gamblers have bet enough on Seattle to move the line to Dallas being just a 1-point favorite at the time of this article.

The Seahawks won in Seattle rather comfortably, and would be likely win on a neutral field. That is not, however, where this game will be played. Dallas is a significantly better team at home than on the road.

The Cowboys win by an average of 6.5 points at home and lose by an average of 4.6 points on the road. That +11.1 swing is the fourth-largest in the NFL this season. Offense is the biggest contributor as the Cowboys score about 17 points away and 25 points per game at home.

Seattle is one of the NFL’s stronger road teams. They rank 6th in road point differential at +3.2 points per game. The challenge here is that even though the Dallas defense is overrated, they are excellent at defending the run. Additionally, Russell Wilson has struggled throughout his career against Rod Marinelli’s defense. He has his 3rd-lowest career passer rating and lowest yards per attempt when playing Dallas.

It is far from hopeless for the Seahawks. They are the better team with the better quarterback. That goes a long way. It will take an excellent game plan, great execution, and very few mental mistakes to win. Slight edge to Dallas.

Dallas has a strong and athletic defensive line, with a playmaking linebacker crew behind them. Rookie Leighton Vander Esch has been a sensation taking over for Sean Lee, and his young partner Jaylon Smith is excellent as well. They all combine to form one of the best run defenses in the NFL.

Chris Carson pounded his way to 100 yards in the first game, but it took 32 carries.

Vander Esch played only half the snaps in the first game, and still had 10 tackles. He will be a larger factor in this contest.

Dallas also has one of the league’s premier pass rushers in Demarcus Lawrence. He had a half-sack in the first game, but will benefit from being at home. Seattle has been awful in pass protection, especially over the second half of the season. Should Ethan Pocic play, that will make things even more challenging.

Byron Jones is an excellent corner who will make life difficult for whichever receiver lines up across from him. He allowed just 3 receptions for 10 yards in the first matchup of these teams.

Marinelli’s defense is great at limiting explosive plays. Seattle is great at creating them. That will be a game-within-the-game.

Dallas has a good defense. It is not great. They are actually 20th in yards per play over the last half of the season. Their pass rush is not as intimidating as others Seattle has faced.

The Cowboys did not face Justin Britt in the first game due to injury, and George Fant was not yet playing as the tackle-eligible tight end. Seattle still managed to be one of only six teams to rush for over 100 yards against the Cowboys.

The Cowboys have allowed over 100 yards rushing six times this year, and are 1-5 in those games. Their only win was by a single point in week 17.

The Seahawks have rushed for less than 154 yards just once in the 13 games since facing Dallas.

Chris Carson is a great back, and his ability to grind out yards after contact will be crucial. Should Seattle force the Cowboys to commit extra men to defending the run, this secondary is vulnerable.

Seattle has what it takes to impose their will on the Dallas defense as long as they stay out of negative plays and penalties. This may be a game similar to Carolina, though, where the team needs to take advantage of the Cowboys overcommitment to defending the run by roasting them through the air.

Dallas has some great offensive linemen in Tyron Smith and Zach Martin. Those two, combined with Ezekiel Elliott, form the foundation of the Cowboys offense. This is a group that likes to run on first down. They count on that to keep things manageable for Dak Prescott.

Seattle has put out one of the worst defenses in football over the last half of the season. They ranked 31st in the league during that time, allowing a dismal 6.2 yards per play.

Cooper is a terrific weapon, and may be matched up against either an injured Shaquill Griffin or relatively inexperienced Akeem King. Expect Dallas to test whoever draws Cooper.

Cole Beasley is always a thorn in opponent’s side, but Justin Coleman is a good matchup there, and had a pick-six last year in Dallas.

Watch out for Blake Jarwin at tight end. He had a big game last week and could challenge a Seahawks team with question marks at safety.

Believe it or not, the Cowboys rushing attack is not all that good. Elliott is a great back, but there have been challenges along that offensive line. Even now, Zack Martin will be playing with a sprained MCL that has caused him to miss games for the first time in his career. Tyron Smith has missed time as well with various ailments.

The Cowboys rank just 23rd in the NFL in yards per carry over the last half of the season. The return of K.J. Wright and the emergence of Poona Ford gives Seattle reason for optimism on run defense.

Dallas relies heavily on short throws. They are one of the least explosive passing offenses in football, even with Cooper. That helps a Seattle secondary that has struggled to contain explosive passes. Pass rush will also help.

The Cowboys allowed 56 sacks this season, second-worst in the NFL, and five more than the Seahawks

Seattle had 5 sacks in the first game. Jarran Reed had two of them. The Seahawks have a significant advantage rushing the passer. Dallas has allowed sacks on roughly the same percentage of dropbacks at home as on the road.

Jacob Martin did not play in the first game, and Reed has come on even stronger over the last quarter of the season. Prescott is also known for fumbling the ball on sacks. A turnover or two created by the pass rush would be massive.

Finally, Dallas struggles mightily in the red zone. They are 29th in the NFL in converting those possessions into touchdowns. Seattle has the 4th-best red zone defense this year. The Seahawks will need that trend to continue in this game.

Neither team has been good at returning kicks or punts this season. The Cowboys are particularly bad at covering, but the Seahawks have been burned twice in the past three weeks on long returns. Tavon Austin is back for Dallas and could be a factor.

Dallas has a placekicker capable of hitting from beyond 60 yards. Seattle might not. Seattle has a punter capable of changing the game. Dallas does not.