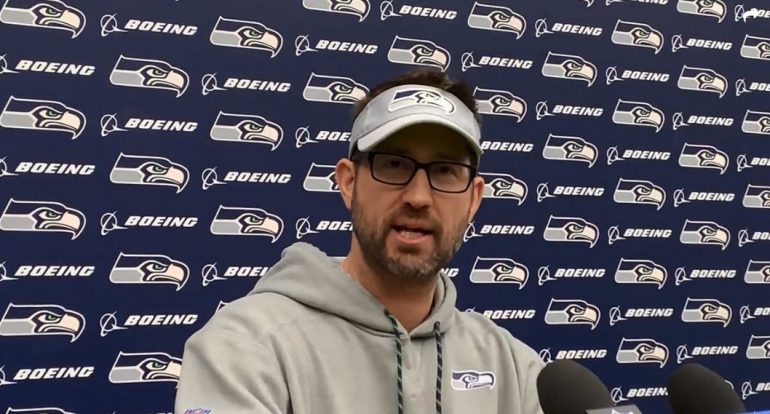 Is Schotty the Less Predictable Play Caller in this Game?

People tend to focus on the very basic of run versus pass as a play call. If you stay at that level, Seattle is much more predictable than Dallas.

Given that rushing tends to yield fewer yards than passing, you would expect the Seahawks to be near the bottom of the NFL in first down yards. They actually rank 14th at over 6 yards per play in neutral script situations.

Dallas falls further down the list at 21st, with about 5.6 yards per play. Interestingly, it is not the run plays that are the biggest issue for the Cowboys. Elliotts averages over 5 yards per carry on first down, and is the third leading rusher in the NFL on that down. Chris Carson is second.

What drags the Cowboys down is a total lack of interest in throwing the ball downfield.

The chart above shows Dak Prescott’s passing tendencies by direction, depth, and down. The one to focus on right now is the top-right. Dallas throws more than 15 yards downfield only 10% of the time on first down. That drops to 9% if you look at the first three quarters and eliminate no-huddle situations.

See how that compares to the Seahawks passing tendencies.

The left is the Seahawks since they moved to a run-heavy approach in week three. The right is the Cowboys after they added Amari Cooper. I picked that timeframe just to see if adding a receiving weapon had changed the tendencies. It did not.

It may surprise many Seahawks fans that Seattle throws intermediate or deep throws on 28% of their first down pass attempts. That is roughly triple what Dallas does.

Not only that, but Seattle throws left, right, and center. Dallas has yet to even attempts a deep middle throw on first down this season.

If you are gameplanning for the Cowboys, it seems like playing heavy in the box to limit rushing yards comes at little risk of a pass getting behind the defense.

Even beyond first down, the Cowboys pass the ball within 15 yards of the line of scrimmage 86% of the time. Seattle is in the 70s. This visualization shows the average depth of target for Prescott and Wilson this season.

You can see how Prescott has a much higher peak 3-8 yard range. His average depth of target overall is 7.5 yards. Wilson, by comparison, is almost two full yards higher at 9.4 yards. That might not sound like much, but it is a massive difference.

You can also see a smoother distribution of pass depth from Wilson than from Prescott. That makes for less predictability. That is not all.

Here is Prescott’s passer rating by direction and depth of target.

Dude does not throw left very well. He doesn’t even throw middle that well. That 158 rating is on just 5 pass attempts. So basically, you need to defend the deep right part of the field. Roll your coverage that direction, sit on all the underneath patterns, and tackle well.

As you can see, Wilson is far more consistent across depth and direction. Given he also is given more chances to throw at different depths on different downs, maybe Schottenheimer isn’t the most predictable play caller in the world.