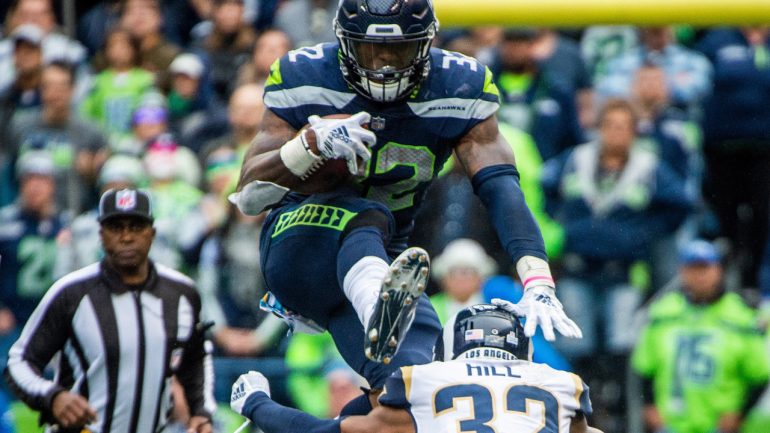 Seahawks running back Chris Carson (32) hurdles Rams corner back Troy Hill (32) during a run in the fourth quarter. The Seattle Seahawks played the Los Angeles Rams in a NFL football game at CenturyLink Field in Seattle, Wash., on Sunday, Oct. 7, 2018.

When discussing fan favorites, Chris Carson’s name is always up there. And I agree with them. Carson is one of my favorite Seahawks ever. I truly mean that. He may not be Marshawn Lynch, but he’s close as it gets. He has a certain unrelenting spirit to how he runs — few things are more satisfying than seeing him truck several defenders for a tough first-down gain.

Carson, who was drafted in 2017, is approaching the end of his third year in the league. Players on rookie contracts are eligible for an extension after completion of their third season, which means extension talks could be coming soon. Having just turned 25 years old in September, there’s no question he’s in the prime of his career. However, and as we all know, running backs have a very short life span in the modern NFL. Unless you’re one of the NFL’s elite, most runners never see a significant second contract. And if they do, it’s relatively small compared to other skill positions. With a potential Carson extension comes many different conversations around replacement difficulty, positional value, contractual landscape, and a whole lot more.

Many fans have asked me: Should the Seahawks extend Carson? If they do, how much should they pay him? At what price should they let him walk? How hard is it to replace his production? All really good questions. Let’s tackle them.

Before we discuss what a potential Carson extension would look like, we need to do our best to quantify his production. Where does his skillset rank among other qualified backs? Unfortunately for running backs, the productivity of the position is mostly dependent on offensive line play and defensive scheme (how many defenders play in the box). As such, it’s difficult to objectively measure the production of a running back while factoring in variables like offensive line play, quality of opponents, defenders in the box, etc. Regardless, I did a little digging to see where Carson ranks among the industry’s more respected measures.

With these measures in mind, I think it’s probably fair to assume Carson as a top 5-10 running back. He’s a great runner, but there are some legitimate concerns around his ball security — and we must take that into account when considering an extension. He’s also not a strong receiving threat, like many of the other top backs (Kamara, CMC, etc). The Seahawks surely will.

The contractual landscape for running backs is truly unique… most elite players only see one significant extension, mainly due to the extremely short shelflife of the position. Once a running back hits age 30 (or close to it), production begins to significantly decline. Unlike other skill positions, running backs typically only have one shot at a big payday. This is why I wouldn’t be surprised if Carson chose to hold out following the 2019 league season. He’ll be 26 at the start of next season… so the clock is ticking.

Looking at the market you have the top four running backs (all considered elite players) making a minimum $13M a year. Ezekial Elliot and his recent extension with the Cowboys currently sit at the top of the market. If you look closely, there’s a significant salary cliff between those top four and the next tier. Devonta Freeman, who sits at the top of tier 2 backs, makes nearly $5M less per year than David Johnson. Running backs in tier 2 (5-10) are all paid in $5.2M – $8.25M range.

Should the Seahawks choose to negotiate an extension, the key element to consider will be whether the team values him as a top-four running back. Is he good enough to be considered among Ezekiel, Gurley, Bell, and Johnson? If he is, he’ll likely be making north of $13M APY. If the team doesn’t think he is, there’s a huge pay dropoff for tier 2 running backs — and Carson will make significantly less. A $5-7M difference in APY is nothing to scoff at. Assuming both Carson’s agent settle on the tier 2 range, I would expect an extension to land somewhere in the $7-9M APY range. Although the team has publicly shown faith against his ball security concerns, I wouldn’t be surprised to see it become a major sticking point throughout negotiations.

With that said, should the Seahawks commit to Carson, I think a 3 year/$25.5M deal gets it done. Here’s what a potential deal could look like.

I have a hunch the Hawks will pursue a shorter-term deal with Carson, and $25.5M over three years would make him the highest-paid running back of the tier 2 group — at $8.5M APY. That would make Carson the 5th highest-paid running back in the NFL. I would expect a total guarantee percentage in the 40-50% range. A 3-year extension would mean Carson’s time with the Seahawks would conclude at age 29, just before the notorious 30-year mark.

These are the numbers I believe gets a deal done. But *should* the Seahawks commit to an extension like that? We’ll discuss shortly.

When considering an extension for any player, the team has to consider their ability to replace his production. If it’s more difficult to replace (think quarterback or receiver), then the player will get a stronger contract. It’s simple supply and demand — and hence why average quarterbacks get paid nearly $30M a year.

When it comes to a Carson extension, everyone knows that running backs are easily replaceable. Even the body blow loyalists admit that committing significant money (or a high draft pick) to a running back is a poor allocation of resources. And statistical analysis supports it:

“Controlling for down, distance, yards to go, quarter, broad run concept and box players, a simple linear model predicting EPA on a per-play basis has roughly the same r-squared (e.g. percentage of variance in outcomes explained) with and without the ball carrier’s grade as a feature (0.0121 versus 0.0117 for all plays in 10 personnel, similar for other personnel groupings). Model metrics are similarly unfazed when looking at classification models for success rate. As Josh Hermsmeyer found in his research, much of what determines success in the running game is game situation and the defense’s approach to stopping the run in the way of box count. The run concept that is used also moves the lever more than how good the running back is, as evidenced by variable importance metrics in various machine learning models.”

Teams can typically find a serviceable back in the later rounds of the draft. A position that is so dependent on the quality of offensive line play, paying a premium price or draft pick to acquire a running back is more often than not a major mistake. Great offensive lines make average running backs look like Adrian Petersen. And great running backs typically don’t perform well with a bad offensive line (see Todd Gurley pre and post the Fisher era).

Here’s a really insightful dive on this topic:

A position that is incredibly dependent on the quality of the offensive line play and the number of defenders in the box, paying elite money to a running back is 100%, without a doubt a bad decision. There is no room for negotiation on this. It’s a poor allocation of resources. The reality is that Carson’s own history of how he became a Seahawk is a good argument not to extend him: Seattle drafted him in the 7th round.

You also have to look at the current Seahawks running back room. A room with Rashaad Penny (a former first-round pick), CJ Prosise (who is extremely talented but has durability issues), and Travis Homer (who is a question mark). Those are players I’m confident rolling with if Carson went down. If Carson ends up holding out and pursuing elite running back money, then I’m more than comfortable transitioning the load to these three. Carson is a very good running back (and he’s super fun to watch), but I’m not convinced the Seahawks would be noticeably worse without him.

Here’s a simple truth: paying a premium, either via the draft or with hard ash, to a running back is a bad decision. If Carson wants elite money, Seattle would be wise to move on from him — whether that’s letting his contract expire (and getting a comp pick) or by trading him.

If he wants tier 2 RB money in the $6-9M range, I think the conversation changes a bit. It wouldn’t be a great decision to invest that type of money in the position, but I also wouldn’t be completely disappointed by it. It’s probably not wise, but it’d be a much better outcome than paying him elite money.

My personal hope? As much as I love Carson — seriously, he’s so fun to watch — it’s just not a good idea to invest serious money in the position. It’s nothing against Carson… it’s just the nature of the modern NFL. If the goal is to win Super Bowls, paying a premium at the running back position is a poor allocation of resources. When you consider the production dependency on offensive line play opponent quality, it just doesn’t make a lot of sense to extend Carson at elite running back money.

This is one of those really tough decisions where the team will need to prioritize their chances of winning a Super Bowl. And that means no extension for Carson. As I said before, I love both Chris Carson the player and the person… and I hope he gets a major, market-setting contract. I just don’t want it to be from the Seahawks.