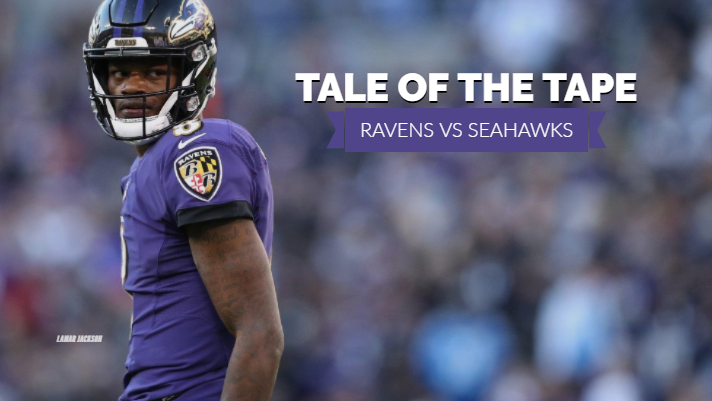 Few Seahawks fans this offseason would have been surprised to hear their team was going to be in a game where one of the most prolific rush offenses would battle one of the league’s most potent pass offenses. Nearly all of them would have raised an eyebrow when told it would be the Seahawks owning that Ferrari pass offense.

Seattle enters a game against a Ravens team that is on pace to break the NFL record for most rushing yards in a season. They have perhaps the most dynamic athlete in the sport in quarterback Lamar Jackson. The Ravens face not only a terrific passing offense led by MVP-front-runner Russell Wilson, but a strong running attack as well.

Neither defense does much defending. Depending on how much of a role the weather plays this Sunday, fans could be in for one of the most entertaining Seahawks games in recent memory, and there have been some good ones already.

The Ravens got off to a sizzling start against one of the worst NFL teams to ever take the field in the Miami Dolphins. They scored 59 points and piled up over 600 yards of offense. The Seahawks, meanwhile, looked completely out of sorts in week one against the Bengals. It was their only game this year they have scored fewer than 27 points.

To provide some visibility into how these teams compare with that outlier of week one removed, I have provided two sets of tables below. One shows the typical full season rankings. The other shows the rankings since week two. Those of you on phones will need to zoom in. The side-by-side layout felt like the easiest way to see the differences.

Seattle has the better offense. They probably have the slightly better defense. Baltimore owns special teams. This is a game the Seahawks should win at home, but it will not be easy.

The Ravens biggest advantage on defense might be Earl Thomas and his understanding of how Russell Wilson plays. He practiced against him for years and has a good feel for what he likes to do. That can work both ways, though. Seattle could very well try to use that against Thomas by breaking tendencies and catching Thomas trying to jump a route.

Marlon Humphrey is a terrific young corner who could make life difficult for Tyler Lockett. Assuming the Ravens will play newly acquired cornerback Marcus Peters this week, they have two solid players to try and slow the passing attack of the Seahawks, plus Thomas.

Their run defense is a bit tough to assess. They have given up less than 40 yards rushing in three of their games and less than 80 in four. Then, they gave up 140 and 193 yards rushing in their other two. Holding teams to such low rushing totals in most games probably means this defense could give the Seahawks trouble if they decide to be pig-headed about running the football, or the weather forces Seattle to be more reliant on the ground game.

The Seahawks offense has been one of the two or three best in the league since week two of the season. The Ravens defense has not been good. They also just lost one of their best players in safety DeShon Elliott. Despite blitzing more than almost any team in the NFL, they have one of the league’s lowest sack rates.

Baltimore has one of the worst pass defenses in the league. Again, the weather could be key here. Wilson has not always played his best in the rain. If the weather is a minor factor, the Seahawks should have great chances to punish a blitzing offense with explosive pass plays.

Should the Seahawks be able to add even a modest running game to the attack, Seattle should continue it’s five-game streak of scoring 27 points or more.

Oy. Jackson is a one-man wrecking crew, and the Ravens have more than just him to throw at Seattle. The idea of Jackson running around in slippery conditions against a Seahawks defense that has had trouble tackling all year should send shivers down the spines of the Seattle faithful.

Jackson is arguably the most elusive runner in all of football. Not just quarterbacks. All runners. Michael Vick had electric speed. Jackson has speed, but his change of direction rivals players like LeSean McCoy. He also has a strong arm.

Baltimore could not have found a player more different than Joe Flacco to lead them for the next decade.

Jackson likes to target their great tight end, Mark Andrews. He also loves to hand off to Mark Ingram and Gus Edwards. This team does read option like they mean it. You won’t see Jackson waiting until the fourth quarter to keep the football.

The offensive line is pretty solid with guys like tackle Ronnie Stanley and guard Marshal Yanda.

Seattle has not shown enough on defense to think they can slow this Ravens attack down much.

Any week is a good week to get Jarran Reed back, but this one is particularly helpful. People were enamored with his 10.5 sacks last season and the potential impact to the pass rush, but it is his run defense that I see as more likely to contribute right away.

The rotation of Reed, Al Woods, and Poona Ford give the Seahawks their best chance yet to clog the middle. It also means players like Bobby Wagner may enjoy fewer linemen breaking through to the second level so he can operate more downhill.

The Ravens receivers are not terrific, and Seattle has at least been mediocre at slowing opponents passing. They are 12th in opponent explosive pass plays since week two, 11th in opponent completion percentage, and 16th in yards per pass. Baltimore has not been nearly as lethal through the air as they have been on the ground.

Jackson has never played in CenturyLink Field. The noise has rattled newcomers on more than one occasion.

The Ravens special teams are far superior to the Seahawks in every aspect. We can no longer minimize the potential for this Seattle weakness to impact the outcome of the game. They nearly lost the game for the team last week, and it would not be hard to argue they lost the Saints game for this team.

It is time to see strength in one part, any part, of this Seahawks special teams.