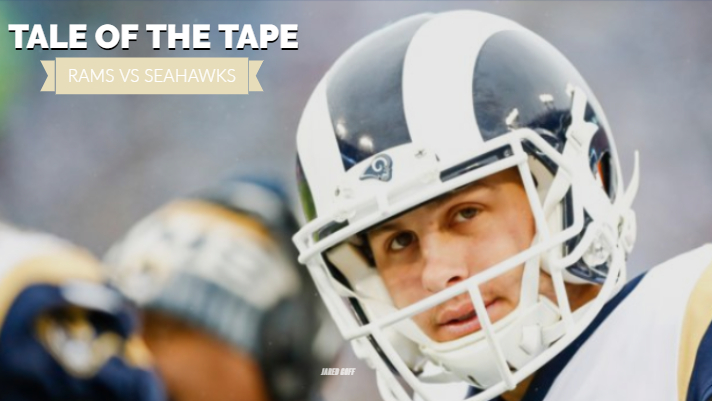 Tale of the Tape: Rams No Longer a Mismatch for Seahawks

The Seahawks and Rams both being 3-1 entering this Thursday night clash is fitting, as for the first time in at least two years, the teams seem evenly matched. Sure, the Rams still have game-wrecking Aaron Donald and a wonderful coaching duo of Sean McVay and Wade Phillips, but they are not the juggernaut they were the past two seasons.

That says more about how good they were than about any real weakness now. They are one of the best teams in the NFL, capable of putting a ton of points on the board and playing better defense than a season ago. McVay is a brilliant mind who will find weaknesses in any opponent’s secondary.

Their defense appears stronger in a number of ways despite giving up 55 points this past Sunday. Seattle ran over and around the Rams last year, averaging a remarkable 228 yards rushing in their two matchups. That includes 273 yards in the second game without Chris Carson. This Rams defense has only given up more than 100 yards on the ground in one game so far, and that was 127 yards in week one.

Seattle is a different team as well. They bring in a different defensive scheme that is more suited to defending the type of offense the Rams play. They have two new defensive ends, a new linebacker, a fresh set of tight ends, and some fresh receiving talent.

They are attacking teams differently on offense, with far more passing and quicker passing than the past few years.

Everything about this game points to a terrific contest. That, alone, represents progress for Seattle and regression for the Rams. Everyone was braced for another blowout when the Rams rolled into Seattle in week five last season, only to see the Seahawks very nearly nab a stunning upset in a 33-31 loss.

Moral victories do not make for very interesting seasons. The Seahawks need to beat this Rams team to have a serious shot at winning the division and securing a home playoff game. The stage is set for them to do just that.

Before talking about the specific advantages for both sides, let’s inventory the changes on the Seahawks offense and Rams defense compared to last season.

Seattle was without one of their top running backs in both games last year. Rashaad Penny missed the first game and Carson missed the second. Carson ran for 116 yards in the first and Penny ran for 108 yards in the second. Will Dissly was not available for either game. Darrell Daniels started at tight end in the first game with Nick Vannett. J.R. Sweezy was the left guard instead of Mike Iupati. Sweezy had a dismal time against the Rams last season, posting pass block grades of 40.4 and 26.4 on ProFootballFocus.com. Iupati has fared better against the Rams.

The Rams defense has added Eric Weddle at safety, who is smart and sound. They no longer have Ndamukong Suh or Lamarcus Joyner or Mark Barron, but they do have Clay Matthews.

The Rams defense overall is far more sound than a year ago. That sounds ridiculous after they gave up 55 points, but the Rams offense had a lot to do with that with a series of turnovers. It says a lot that even after that performance, they are among the top ten in the league in yards allowed and yards per play.

Discipline against the run game was a major weakness the past few years, but appears to be far better now. Weddle is a great addition and former Husky Cory Littleton is playing wonderfully at linebacker.

Aaron Donald is the biggest single-player advantage in the NFL. No one player can block him. Although, he has been a less effective pass rusher this season. He ranks 99th in pass rush productivity, per ProFootballFocus.com after ranking 1st a year ago. He has just one sack. Do not let that fool you. He is a game wrecker.

The Rams greatest advantage might be if the Seahawks decide to try and run it down their throats, remembering the thrashing they delivered on the ground last year. That would play into the Rams hands.

The secondary is no walk in the part either. Marcus Peters is playing worlds better than last season, ranking among the best in the NFL on coverage snaps per opponent reception.

Keep an eye on Matthews against Germain Ifeid. Or, better yet, avert your eyes.

The Rams will likely be missing rookie safety Taylor Rapp, who has been a big part of their defense so far this season. He exited the game with an ankle injury.

The Rams have been the second best team in the NFL covering tight ends, and Rapp has been central there. Look for the Seahawks to probe with Will Dissly and see if they can exploit a weakness.

Los Angeles also struggles against #2 receivers, ranking 28th in the NFL in defending them, per FootballOutsiders.com. Aquib Talib has not been as good this year, allowing a 99.2 passer rating.

Russell Wilson is passing the ball faster than he ever has, and the Rams are not rushing the passer as well as they have in the past. If Seattle can neutralize some of the titanic impact of Donald by getting rid of the ball quickly, that could be a major shift in how these teams match up.

Having both Carson and Penny available for this game could be a big deal. The Rams have not faced a particularly good rushing team so far, and the Seahawks showed signs of finding their rhythm this Sunday on the ground for the first time all year.

There are plenty of changes here as well. Perhaps the biggest difference is on the Rams offensive line. They were largely regarded as the best line in the NFL last year. They lost center John Sullivan and right guard Roger Saffold. Not only have the replacements not played well, the whole line has taken a step back.

The Rams enter this game ranked 31st in the NFL in run block grade and 32nd in pass block grade, per ProFootballFocus.com. Each individual player is struggling in that regard. Left tackle Andrew Whitworth is still a good player, but he has not been elite. Brian Allen is the new center and Joseph Noteboom is the new guard. Both have grades below 50.0 in PFF.

Cooper Kupp did not play in the second game last season and is back with a vengeance. Todd Gurley played and was healthy in both games last year, but has not been himself since injuring his knee last last season.

The Seahawks defense has Al Woods instead of Shamar Stephen, but will be missing Jarran Reed. Poona Ford played 17 and 18 snaps in the games last year, but is now starting. Mychal Kendricks did not play in either game, with either Austin Calitro or Barkevious Mingo playing instead.

Seattle no longer has Justin Coleman or Frank Clark. They do have Jadeveon Clowney and Ziggy Ansah.

The Rams receivers are among the best in football. Kupp, Brandin Cooks, and Robert Woods are all terrific weapons who will challenge the Seahawks secondary all evening.

As much as the Seahawks secondary has had bad moments, they rank fifth in the NFL in limiting explosive passes. That will be put to the test against this Rams passing attack.

No opponent has been able to truly test the Seahawks reliance on base defense with their three linebackers until now. The Rams live in three receiver sets, and will be salivating at any situation where their receivers can go against a Seahawks linebacker.

One of the silent casualties of the Seahawks moving to a two-deep safety approach is Bobby Wagner. He has different responsibilities that may not align as well to his strengths. At the very least, he is still adapting to this new two-high look as well as having all three linebackers on the field almost all the time.

The Rams will be looking to dominate through the air as they have in the previous matchups. McVay and their receivers give reason for them to be confident there.

Jared Goff is not playing well this season. He is struggling behind a line that has given up more pressures than any in the league. He is throwing interceptions (6) and fumbling the football.

The line is just a disaster. You would like to think the Seahawks could take advantage, especially in front of a raucous home crowd, but the Seahawks pass rush has not been very good so far.

Ansah appeared to be getting his legs under him on Sunday. Clowney had one of his better games. Maybe this is the moment where they start to have a more consistent impact. Clowney has had some big plays against this Rams line in the past.

Gurley was a major factor in both Rams victories last year. He has been a shadow of himself so far. The Seahawks run defense has been okay, and their tackling has been okay. Neither has been great. The weather could be wet again and the Seahawks defense seemed to struggle tackling against the Saints in part due to wet conditions.

If Gurley continues to disappear, that becomes a major advantage for Seattle.

Johnny Hekker has had a rough year so far. His net punting average is 36.3 yards. That’s awful, and a far cry from a guy who usually is a major advantage in any game. Michael Dickson has not been as good as last year, but has not been as bad as Hekker this year.

Greg Zuerlein is still a game-changing kicker. Jason Myers finally had a chance to make a couple.

The special teams could play a major role in how this game plays out.