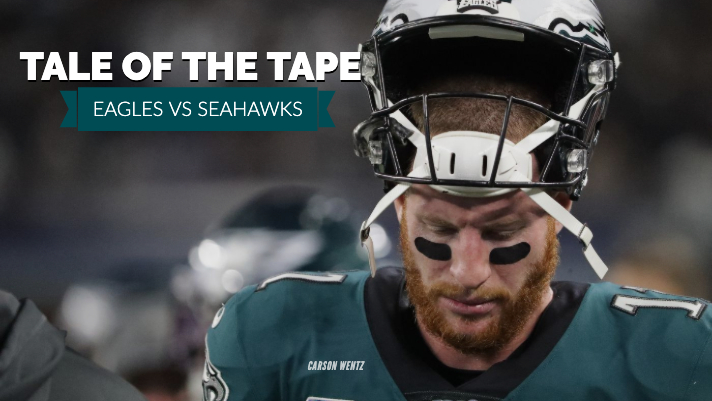 Tale of the Tape: Injuries Will Play Major Role in Seahawks/Eagles Matchup

One of the most challenging aspects of NFL games to prognosticate is that a team changes throughout a season. Players may develop. Schemes may evolve. Players may be hurt or get healthy. The Seattle Seahawks of 4-5 weeks ago is a different team than the one that beat the 49ers last week.

Their statistics and rankings reflect the average of who they have been across all of those changes, but do not necessarily reflect who they are right now. The same could be said for the Philadelphia Eagles.

They have returned some players to their beleaguered secondary that helped them hold down Tom Brady and the Patriots last week, but they also were missing key offensive players like running back Jordan Howard, wide receiver Alshon Jeffrey, and right tackle Lane Johnson.

It’s too early in the week to know who will play for Philly this week, but the fanbase is largely turning on quarterback Carson Wentz. They expect him to be carrying this team after being awarded a hefty contract while letting fan favorite Nick Foles walk. Wentz has not performed up to expectations and everyone is letting him know about. Even his coach talked about Wentz pressing.

Injuries could impact the outcome of this game drastically. Johnson, in particular, could be the difference between another Jadeveon Clowney takeover and something more reserved.

All that said, these two teams appear somewhat evenly matched given the game is in Philadelphia. Seattle has to prove to themselves and to the league that they can replicate some of the success they had in playing defense against the 49ers. This is not a powerful offensive opponent. If the Seahawks were to play defense the way they did last Monday night against this Eagles offense, the game would not be close.

Cornerbacks Jalen Mills and Ronald Darby were out for a long stretch, as was cornerback Sidney Jones. All of those players have returned to action making this Eagles secondary quite different than the one many teams have faced so far this year.

Philadelphia has a strong run defense. Fletcher Cox is a handful in the middle. Timmy Jernigan can be disruptive as well. Only two teams have managed to eclipse the 100 yard rushing mark against the Eagles, and both those teams blew the doors off them.

Brandon Graham can also be a handful as a pass rusher. The Seahawks line did admirably against a terrific 49ers stable of edge rushers. They will need to repeat the feat here against Graham, Cox, and Vinny Curry.

The Eagles do a good job of limiting explosive plays. Seattle may need to be more patient than usual with underneath passes instead of the chunk plays Pete Carroll and Russell Wilson prefer.

Josh Gordon is still an unknown for opponents. He got enough snaps against the 49ers that the Eagles have to game plan for him, but not enough to become a higher priority than Tyler Lockett or D.K. Metcalf.

That could lead to a big game for Gordon as Seattle starts to unveil their new weapon. Gordon won’t be the only new face. Ed Dickson is likely to come off IR this week as Luke Willson recovers from a hamstring injury.

Dickson will combine with emerging weapon Jacob Hollister and Gordon to give the Eagles a lot to think about without a lot of film to study.

As talented as the Eagles pass rush appears to be, they are relatively ineffective in terms of sack rate. If the offensive line can create some space for Wilson, Seattle should be in good shape.

Left tackle Jason Peters missed some time due to injury but is back. Right tackle Lane Johnson left the Eagles last game with an injury that might cause him to miss this week as well. If Johnson suits up, the Eagles tackles are pretty decent pass protectors. If he doesn’t suit up, the Seahawks could have a meaningful advantage.

Carson Wentz is under fire from Philly media and fans. He still shows a lot of moxie in his play, including helping the team to a top five ranking in 3rd down conversions.

Wentz is being criticized for, among other things, being unwilling to take what the defense gives him and throwing contested deep passes instead. His accuracy is also getting critiqued. I gained a ton of respect for Wentz the last time he came to Seattle even in a loss.

He remains one of the better quarterbacks in the league in my estimation until I see his regression with my own eyes.

Jordan Howard has been their bell-cow lead back. He missed the last game due to injury and may not be back for this game. If he is, he’s a determined runner. The team also signed Jay Ajayi, who can be a powerful tackle breaker as well. Everyone focused on the pass rush against the 49ers, but the improved run defense was just as important. They need to do it again to force Wentz into tougher situations.

Halapoulivaati Vaitai subbed in for Johnson last week at right tackle and was a disaster. Seattle could line Clowney up opposite him and just destroy the Eagles offense. It’s not clear Peters could stop Clowney either after the way he played last game.

He will be getting a ton of attention, which should help folks like Jarran Reed and others have a greater impact.

The Eagles receivers have been very bad. Three of the top four receivers have ProFootballFocus grades of 52 or lower. A grade of 60 is considered average. The only guy above that mark is Alshon Jeffrey, who may not play due to injury.

What they do have is Zach Ertz and Dallas Goedert at tight end. This will be a good game to see how the Seahawks want to use Quandre Diggs, Bradley McDougald and possibly Marquise Blair. There is a case to be made for a three safety look against this squad.

This is also the perfect game to give Ugo Amadi some snaps at nickel. None of these receivers should scare the Seahawks. It could make for a good soft landing.

Jason Myers came through. Thank god. He could very well be a big factor again this week. Eagles kicker Jake Elliott has yet to miss a kick this year.