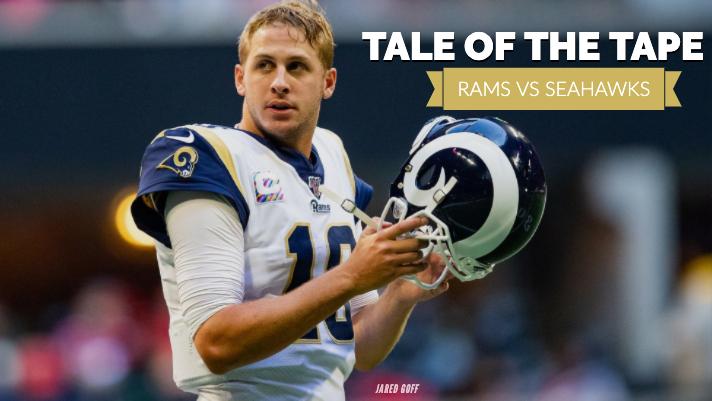 Tale of the Tape: Rams Last Gasp is Plenty Dangerous

It was not long ago that the Rams were considered kings of the hill in the NFC West, and even the NFC more broadly. The Seahawks needed to prove they could overcome the team that made the Super Bowl last season, won two straight division titles, and three straight head-to-head matchups. It felt monumental when Seattle did just that earlier this season, but feels less so a couple of months removed.

Los Angeles entered that game 3-1, and has gone 4-4 since that point. They have a point differential of +20 over those eight games. Seattle has a differential of +22 in the same stretch, but has managed to go 7-1.

There are multiple ways to interpret that variation of result. Many would attribute it to luck. Others would point to the different players occupying the quarterback position. Some may consider the head coaches, and which one has track record of sustained success and developing talent to finish the season stronger than they started.

Whatever the reason, the case can be made that these two teams are very evenly matched even if the record indicates otherwise. The Rams have one of the least intimidating home fields in the NFL, and represent a short trip compared to the bevy of 10AM games across the country Seattle has played thus far.

This game determines if the Rams playoff hopes remain alive. They have a lot to play for. They had plenty to play for a couple of weeks ago in prime time, and that did not stop them from getting curb-stomped by the Ravens on their home field. Seattle has a chance to end the Rams season and further their own odds of securing a division title.

The Rams have plenty of talent left, particularly on defense, to play spoiler if Seattle does not play well. This, though, is one the Seahawks should win.

Aaron Donald is still a dominant force. That won’t change for many years. He has 9.5 sacks and created havoc in the first matchup early on. Justin Britt is gone and Joey Hunt has done a mostly admirable job filling in. He has had trouble with bull rushes, and Donald is the biggest bull on the block.

Safety Taylor Rapp missed the first game between these teams, and has now ascended to a starting role opposite Eric Weddle. He’s excellent in coverage and should be a quality safety for a long time. Seattle is missing the services of Will Dissly, who had 81 yards receiving the first matchup, but you can expect Rapp to work on limiting Jacob Hollister.

Jalen Ramsey has been acquired, and replaces Marcus Peters, who Russell Wilson picked on multiple times. It seems unlikely he will shadow Tyler Lockett considering how ineffective Lockett has been the past two games.

Nickell Robey-Coleman is an excellent nickel corner, who did a decent job on Lockett in the first game.

Overall, this is the third best rush defense in the NFL by a few different metrics. Seattle has faced six of the top nine run defenses in the league, and topped 100 yards rushing against all of them. They have topped 140 yards rushing in five of those games, including the past two weeks.

The Rams defense has generally needed to be terrific in order for the Rams to win.

There have been six games this season when the Rams have allowed 17 or more points. They are 1-5 in those games.

That is a very tough standard to meet in today’s offensive-centric NFL. Only four teams in the league average fewer than 17 points per game, meaning the Rams have had to hold teams well under their averages to win.

That is a very different story than the past two seasons when their offense led the way.

Wilson was masterful in the first meeting. He threw for four touchdowns and finished with a nearly perfect passer rating of 151.8. He has not had a game like that in some time. He knows this team well. There will be few surprises.

He will need his receivers to be healthy and to stop fumbling the ball. D.K. Metcalf could be a great option against the smaller Troy Hill at corner, but he needs to protect the football.

D.J. Fluker left the first game with an injury, and Jamarco Jones filled in splendidly. Fluker’s return could be good for Seattle on the ground, but may mean more problems in pass protection. On the flip side, Mike Iupati struggled a lot in the first game, but has been playing quite well over the past few games.

The offensive line is coming off their best game of the season, and one of the better games by a Seahawks line in years. This is a game that lends itself to Rashaad Penny’s penchant for explosive rushes.

The Rams offense still has Sean McVay. It still has Cooper Kupp and Robert Woods and Brandin Cooks. Tight ends Gerald Everett and Tyler Higbee have been central to the Rams attack this season, and had big games against Seattle in October.

Everett missed the game last week due to injury and is questionable this week. Whether he plays or not, the Rams have receiving targets that will challenge the Seahawks secondary.

As pedestrian as the Rams have been offensively at times this season, they just piled up over 300 yards passing in the first half against Arizona.

Seattle had them in trouble for the first half earlier this year, and then saw them explode in the second. The passing game is key here.

The Rams offensive line is atrocious. Andrew Whitworth is okay at left tackle, but the rest of the crew is really bad. They lost their center Brian Allen to injury a few weeks back and are now starting Austin Corbett. Rob Havenstein missed the last game or two with an injury and may be back, but he has allowed more pressures than anyone on the line, so it is hard to say if him playing is helpful to the Rams or the Seahawks. Austin Blythe is awful.

Seattle had zero sacks and just five QB hits in the first game. Those numbers should be much higher in this one. Goff makes some amazing throws, but he also makes plenty of back-breaking mistakes with fumbles and interceptions. He has 13 touchdowns and a whopping 12 interceptions. He also has 10 fumbles, having lost five of them.

Jarran Reed did not play in the first game. Quinton Jefferson led the team with seven pressures. Jadeveon Clowney has become far more comfortable in this defense. Ziggy Ansah, assuming he can play, has surged the last two weeks. Rasheem Green has flashed. Shaquem Griffin was not on the field the last time they played. There is almost a completely different pass rush for the Rams to contend with. Go eat, fellas.

Tedric Thompson made one of the most beautiful interceptions you will ever see in the first game, but was dismal in coverage and tackling the rest of the game. Quandre Diggs steps in and should present very different problems for the Rams passing attack.

The clear improvement of Tre Flowers will be tested in this one, and we very well may see Ugo Amadi finally get some snaps at nickel corner. Akeem King seems like an odd fit against these receivers. That will definitely be a matchup to watch.

The Rams rushing game has been mostly non-existent behind this offensive line. Seattle should be able to dominate the line of scrimmage. This is a game the Seahawks defense should rise up and lower the bar for how well the Seattle offense needs to play.

Jason Myers missed a big kick in the first game. He has been reliable of late. Greg Zuerlein has had a more inconsistent season than usual. The Rams special teams is marginally better than the Seahawks but they also just lost their dynamic kick and punt returner for the year.

Keep an eye out for fakes. That is always the case with the Rams, but they need to pull out all the stops in this one.

Be sure to tune into Real Hawk Talk Thursday night at 8PM PT!