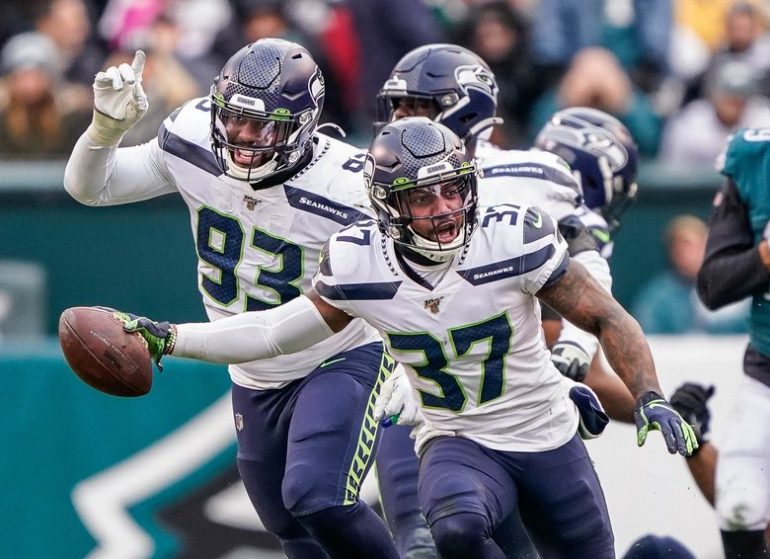 Win and you own the division. This was the only mood in the Seahawks universe all week. Discussion of the opponent was simply to pump up talk about division ownership. No surprise though, it’s been a little while since Seattle had the chance to do that this late. So? Was it mission accomplished? Let’s break it down.

This play is really frustrating from the missed tackle by KJ, to the Herculean effort by Cousins to get the ball off. Teams run all kinds of motions, screens, boots and waggle plays and Seattle still has trouble cleaning them up. Two such plays happen on this drive leading to a touchdown by Cook. The other being the enda-round play to Diggs. Good hustle by Bobby though. KJ’s struggles with spotty play continue.

The best thing about this play is that the coverage holds up against a 7-step drop. There’s a play action fake and everyone is covered up down field. It’s a two-man route, but with as bad as Seattle struggled last year and the first eight games this year, don’t take this for granted.

This was a key stop in the sense that Seattle has had trouble with their edges since last year controling outside runs. Since Minnesota likes the stretch run you have to beat it just like this. The guys in front are well prepared as both Al Woods and Rasheem Green leverage themselves outside to take Cook down and deny him an easy lane. If you want to know why Cook had just 29-yards on 9 carries, this is why.

Yet another successful screen. This time poor Bobby Wagner is the only guy who has a shot near where the play happened. It ends up being him vs 3 blockers. Clowney recognizes this play late by his hustle probably saves a bigger disaster here. He did force a fumble but the Vikings recovered. Clowney’s effort is never in question for me.

This play is probably a good example of why players hate prevent calls. Shaquill has been great all year on these shorter throws, attacking the ball, breaking them up. Here though, you can actually see his thought first is to keep Stefon Diggs in front of him. This allows for a pretty tough completion on a pass that could have been knocked away. Vikings get 3 points. A tough, stupid frustrating drive with all the things I hate. Screens, draws and lucky throws. Dammit.

Check out this neat little pressure by Seattle. Vikings go empty and Seattle was all about this not going anywhere. They only bring KJ as the extra man, but the Twist inside by Shaquem combined with Reed’s rush left Cousins in a tough spot. Initially this was ruled a fumble. The deflection by Shaquem is a great sign for growth. He’s getting better every rush it seems like. Watch this play a lot. It’s worth it.

This play had to come from some adjustment or film study. Watch late before the snap. Bradley McDougald walks down to the Line of scrimmage. This allows Rasheem green to play with the flow of his blocker and dip inside on the run. He knows McDougald has the edge on this play. Details, film study, adjustments? Sometimes fumbles are lucky, but you can also put yourself into positions to get them. Just like this play here.

More growth signs from Tre Flowers on this interception. The Vikings had just missed on a deep shot so it’s easy to get a little tense about a deep ball. Flowers is all over this short stop route. Yes there is some contact, but in the five yard space the refs pretty much let both teams play all they wanted in this game.

Gross miscommunication between Shaquill and McDougald here. I think the mistake is Shaquill’s because when you see the amount of business Bradley has in front of him, there’s no way for him to turn that lose and go up the sideline. Maybe Shaquill missed a call or something. The small scramble by Cousins hurts, but not as much as the pump fake TD. Tell the truth film study is not likely to have been kind on this one.

This play is so tough to watch. It’s a great play by Rudolph to be sure, but KJ is just so tenative to react here. He has his back to the play loses the physical matchup and never realizes the ball is coming. He’s had moments, but I don’t see how he’s on this team next year with plays like this and the early missed tackle on the bootleg. KJ looked especially old and slow on this play.

This play here the Vikings send out 5 guys and I think Cousins is just looking for some kind of contact to throw against. Once he sees King hand fighting with Smith he just locks on and throws. Wether or not he threw for a flag, I have no idea, but he wasn’t under any immediate duress. He just cut it lose. King played this as well as you can. He also ends up playing the ball because of how Cousins leads the throw. This was also in that combat area of 5-yards as Irv is only 4-yards upfield when the ball comes out. Great play by King to hang in there.

The Vikings put up 23 points against the defense. (The other score was a pick six by the Vikings defense.) The end result though was that the Vikings only had 3 drives of any considerable length. Seattle made some frustrating mistakes late. Otherwise the calls, the plan and the prep for this game looked about as good as it has all year. Seattle’s D-line was shut out for sacks, but the line deflected a few passes forced a fumble and crushed the running game. Nothing to take away that’s hyper negative.

The left side of the defensive line. Seattle was prepared for the Vikings strong side stretch runs. They stopped all of them and forced a fumble. Rasheem Green is earning his snaps with just how many plays he’s making. Combine all that with a pairing of Shaquem and Jarran Reed a near sack fumble, the right side of offenses should start taking notes.

Communication. Not much needs to be said when you give up a 58-yard Touchdown because everyone is confused. Also screens goddammit.