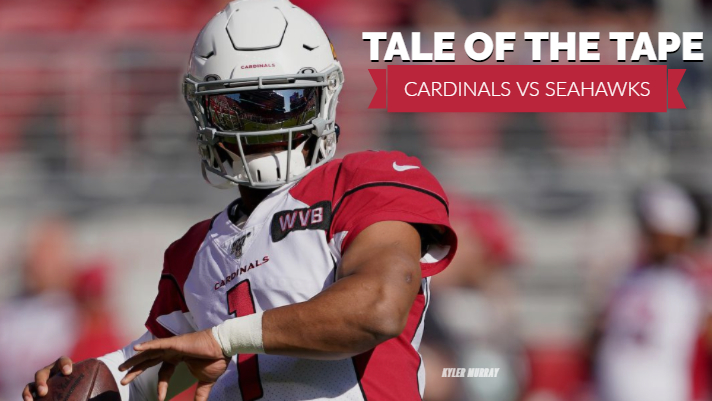 Tale of the Tape: Seahawks Offense Needs to Do Their Job vs Cardinals

This is not a particularly complex game to preview. Seattle is mostly healthy on offense, and is playing at home against one of the worst defenses in football. The current forecast calls for dry weather. The Seahawks are adept at attacking through the air and the ground, and the Cardinals have trouble defending either.

Yes, it is a division game. Yes, the Seahawks defense could be riddled with injuries. Yes, Kyler Murray is having a very nice rookie season. Those are reasons this game might be uncomfortable. None of them are reasons the Seahawks should lose.

Chandler Jones and Budda Baker are the two players to be aware of on defense. The rest of the group is pretty bad. Really bad. Jones was held without a sack in the first matchup, and had just one tackle.

Seattle, meanwhile, has rushed for over 140 yards in six of their last seven games, including against defenses like the 49ers, Vikings, Eagles, and Bucs (yes, they have a great run defense).

You have to think the Seahawks will try to control the game on the ground. Look for Travis Homer to get his first real run behind Chris Carson.

There are plenty of yards to gain through the air as well. Tyler Lockett and D.K. Metcalf should be in for a strong day. Russell Wilson should have enough time against a weak pass rush, and with the help of an effective run game, to put together a very productive game.

Thirty points is the bar for the offense. They could score in the upper 30s if the passing game can find some consistent success.

It will be good to get Luke Willson back this week, and he has a history of big games against Arizona.

Kyler Murray is a wiley rookie. He can cause big trouble when he runs, and has a great arm. His reputation, though, is a little ahead of the team’s true production. This is not a great passing team.

Where Arizona will have the biggest advantage is where the Seahawks are injured. Assume Quandre Diggs and Shaquill Griffin do not play. Mychal Kendricks may not play either. There could be some miscommunication, poor coverage, and faulty tackling that makes life easier for the Cardinals.

Kenyan Drake has been a big addition for the team, and has made the run game far more effective. Look for Arizona to try and get him going early.

Seattle has been feasting on opponent turnovers. Arizona does not give the ball away often.

There are not many. Poona Ford should have a good day against this line, and Jadeveon Clowney might as well if he can play. Ziggy Ansah would be a welcome addition.

Overall, this defense just needs to hang on for another week while players get healthier.

The special teams has never really gotten on track this season. Arizona is not much better.