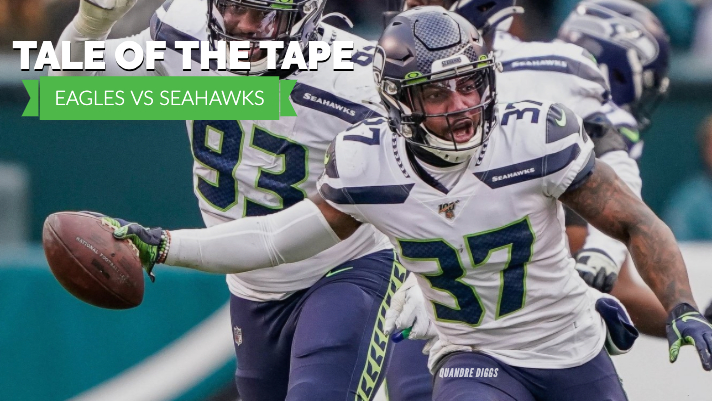 Tale of the Tape: Seahawks Have Best & Worst Unit in Eagles Matchup

There was a brief period of time where it seemed like the Seahawks defense was going to metamorphose from an ugly caterpillar into a beautiful butterfly. Eagles fans remember that period as they experienced that fleeting moment where Seattle flashed defensive competence. Injury and regression have led the Seahawks back to the bottom of the barrel as they enter the playoffs with arguably the worst defense of any team in the postseason. That defense is the worst unit in this wild card matchup with the Eagles, worse than both the Philly offense and defense.

The good news for Seahawks fans is the Seattle offense is the best unit in the game. While there will be plenty of stories about how the Eagles offense has found itself since they scored 9 points against the Seahawks and lost to the Dolphins, there should also be recognition that Seahawks offense was missing Tyler Lockett in the first matchup and Russell Wilson was in the midst of a slump.

The case can be made that the Eagles offense should play better in this game. Seattle’s offense could very well play better as well, and they were a few boneheaded plays from scoring 31 points in the first game. Philadelphia did not score their first touchdown until the final minutes.

There are some important differences from the first game, so let’s cover the big ones here.

Did not play in the first game, expected to play Sunday

Played in the first game, expected to miss this game

The Eagles boast a solid pass rush that got the Seahawks for six sacks in the first game. They have good edge rush from Brandon Graham and Vinny Curry to go along with solid interior rushers in Fletcher Cox and Timmy Jernigan. They also are willing to blitz with safeties or corners, especially on 3rd down. Safety Malcolm Jenkins had two of the six sacks in the first game.

If Duane Brown is unable to play, that could present some problems for George Fant.

Their rush defense ranks 4th in DVOA, and 3rd in rushing yards allowed. They held Chris Carson to 26 yards on 8 carries, but surrendered 129 yards on 14 carries to Rashaad Penny. Travis Homer is more of an outside runner, like Penny.

The wind really impacted Russell Wilson’s ability to throw in the first game, and it is expected to be windy again Sunday. That could help a mediocre Eagles pass defense.

The Eagles have had a lot of change in their secondary since Seattle played them. Starter Ronald Darby is now on IR. He matched up some against D.K. Metcalf in the first game. Philadelphia has played Rasul Douglas in his place. Douglas is a bigger corner, who also plays safety, but is not all that agile.

Jalen Mills missed last week’s game due to injury but is expected to play in this one. He also got a lot of reps against Metcalf, with mixed results. Nickel corner Avonte Maddox looks like he will play despite injury as well. Maddox has been sliding outside some since Darby was injured and Cre’Von LeBlanc has come on as the nickel.

No matter what configuration the Eagles run out there, they are going to have their hands full with Tyler Lockett and Metcalf.

A healthy Lockett is a major difference maker that the Eagles did not have to contend with the first time. Metcalf had pretty bad game with a couple of drops. Those two are playing at a high level and Wilson had his best game in months last week against the 49ers defense that is significantly better than this Eagles crew.

Metcalf could have had a huge day against the Eagles, and has been playing his best football of the season since. It would not surprise me to see a huge day for him. Eagles corners are probably enjoying some misplaced confidence in regards to Lockett given he just could not move like normal in that game. He has a chance to catch them off guard with his quickness now that he is healthy again.

The injury to Jaron Brown may mean more snaps for David Moore, Malik Turner, and John Ursua. Moore was the top-graded player on offense for the Seahawks in the first game, and Turner was fourth.

Turner is appearing less and less likely to play due to concussion. That would mean more snaps for Ursua. That presents problems for an Eagles defense that has no tape to assess.

Seattle’s best chance in this game is if Wilson can play like he did in the second half against the 49ers, hitting short throws and taking what the defense gives. Philadelphia is vulnerable to the deep pass, but that will need to be a change up, not the focus of the game plan.

There are some important differences from the first game, so let’s cover the big ones here.

Did not play in the first game, expected to play Sunday

Played in the first game, expected to miss this game

Jordan Howard is a difference maker at running back if he is truly ready to play. He was active last week, but played only one snap despite Miles Sanders ankle injury. The word is he was working his way back into playing shape and will be leaned on more this week. He is a tackle breaker, and Seattle missed a lot of tackles.

Mychal Kendricks had a big game against his former team last game, and is now out. Cody Barton has been more of a liability than a competent linebacker when he has played. His solid coverage, however. could come in handy against the Eagles tight ends.

Carson Wentz had his worst game of the season versus Seattle, and should be quite a bit better after a few weeks of gaining confidence. He had two interceptions and two lost fumbles in that game. The Eagles have not had more than one turnover in a game since they played Seattle, and have gone two straight without any turnovers.

Seattle is 0-3 this season when not forcing a turnover. They have, though, forced at least one turnover in every road game this season.

The general narrative is the Eagles are on a roll and peaking at the right time after winning their final four games. They have averaged 28.4 points per game since playing the Seahawks and scored over 30 points in three of their final five games. When you look at who they played, those accomplishments become a little less impressive.

Seattle was the best defense the Eagles played over the final six weeks. They played the worst defense in football, the 25th-ranked defense twice, the 22nd ranked defense and 19th-ranked defense. Nothing guarantees an offense will score, regardless of competition. Look at how the Seahawks laid an egg against the Cardinals. But that is not the only reason to be a bit skeptical about the Eagles offense.

Here are the Eagles leaders in receptions since they played Seattle:

Sanders will likely play, but is injured. Ertz is unlikely to play. Jeffrey is on IR. Agholor will not play. Their truly healthy receiving threats are Goedert, Scott, and Ward. That’s about as pedestrian as you get in the NFL.

Ertz missed the last game, and that allowed the Giants to focus more attention on Geodert. He became less effective, catching just 4 passes in 10 targets.

If we look at their rushing attack, Sanders was responsible for 381 yards and 4.8 yards per carry average, while Scott accounted for just 151 yards and 4.0 average. Howard’s return could help here, but Sanders gutting it out on a bad ankle could actually hinder the Eagles offense.

It may make sense for Ugo Amadi to get more nickel reps with Ward being a key receiver and Ertz not playing. Akeem King played the last time largely due to the tight end reliance from the Eagles.

Even a bad Seahawks defense has a good shot to slow down this thin Eagles offense.

Special teams has improved of late for the Seahawks. Neither team is particularly great in this department, so it does not seem likely to be a major factor.

Be sure to tune into Real Hawk Talk post-game show Sunday!