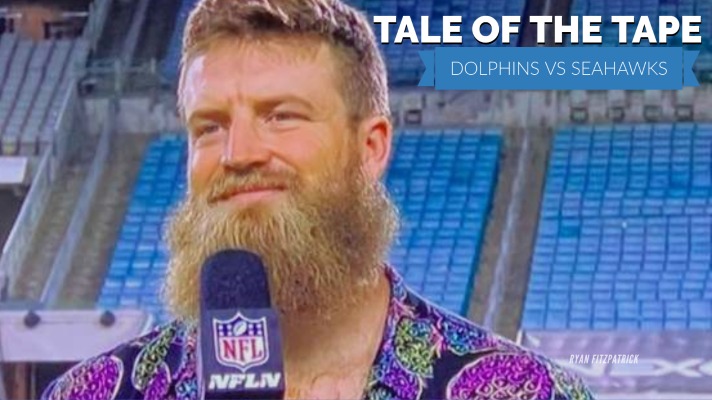 The Dolphins were the worst team in football last season, but they even managed to mess that up and blowing the top pick by winning too much. They return this year with a truly desolate roster that should lose a lot of games. There will be plenty of games this season where I tell you why the Seahawks are threatened, but this should not be one of them.

And yes, I know how bad the Seahawks secondary has been and the injuries they are facing. There are two primary reasons the Seahawks should be able to overcome all sorts of adversity and still win. First, future MVP Russell Wilson will face the worst secondary he has seen so far this year. This group ranks 31st in coverage grade by Pro Football Focus. Second, this might be the worst offensive line the Seahawks face all season.

It would not be shocking if this was closer than any Seahawks fan would like, and you have to imagine the Ryan Fitzpatrick and the Dolphins are licking their chops, but Seattle has countless ways they can leave Miami with a win, and the Dolphins have very few.

Miami has a few decent pass rushers in Kyle Van Noy, Shaq Lawson, Emmanuel Ogbah, and Andrew Van Ginkel. Seattle just faced a much better pass rushing crew and held up pretty well. They will be facing some crowd noise as the Dolphins allow 13,000 fans to attend.

Xavien Howard is a decent corner who has size at 6’1″ to try and match up with D.K. Metcalf.

Of the top nine players in coverage snaps on the Dolphins, just one of them has a PFF coverage grade over 59, and four of them have grades under 50. That is awful. Really, really, awful.

Noah Igbinoghene plays corner opposite Howard and sports a Tre Flowers-like 45.6 grade. Match him up with Tyler Lockett or Metcalf or David Moore or Freddie Swain, and there should be plenty of yards to be gained.

Jamal Perry is their nickel corner, and his grade isn’t much better at 52.3. Neither safety is very good either.

Wilson should have his pick on almost every play. The biggest risk here is that the Seahawks get too confident and sloppy. Otherwise, they should be targeting 40+ points.

Fitzpatrick has moments of brilliance followed by moments of facepalming decisions. Seattle will have chances to add to their interception total, but they need to catch the ball.

DeVante Parker has every reason to feel confident facing the Seahawks corners. Mike Gesicki is quietly having a big season at tight end.

The offensive line is putrid. As frustrated as Seahawks fans have been with the pass rush, they should see more success on Sunday.

Alton Robinson, Benson Mayowa, Bryan Mone, Jarran Reed and others should be set for their most productive game as a group. The reckless blitzing from Ken Norton Jr. may actually work in this game.

Fitzpatrick is plenty capable of putting up big numbers against the Seahawks secondary. This group just has a lot less talent than the teams Seattle has faced thus far.

Special teams continue to be a major plus for the Seahawks, and that should continue this week.