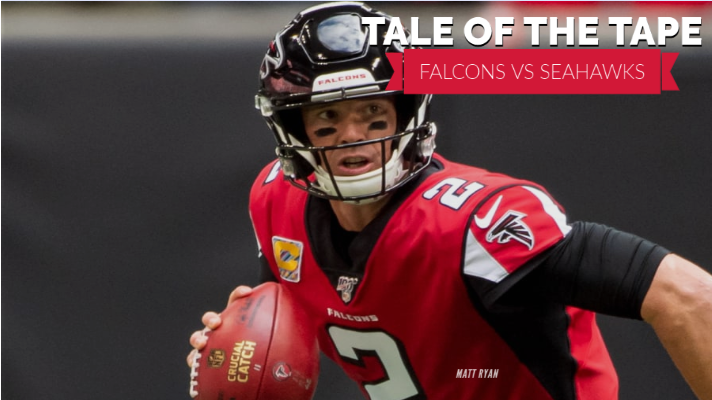 Tale of the Tape: Seahawks Passing Game Should Win vs Falcons

There are many ways to look at the Seahawks matchup against the Falcons to start the unique 2020 NFL season. My first instinct is this should be one of the easier opponents that Seattle faces this season. Atlanta was a flawed team last year and did appear to make any massive improvements.

My second thought was that the Seahawks always seem to struggle in the season opener, especially on the road. But then you have to wonder how this experience might be different without any fans in the stands to influence referees or energize the home team.

I end up thinking about the game these two teams played last season where the Seahawks played a great first half to lead 24-0, only to be embarrassed by Matt Schaub in the second half before barely holding on for the win.

Given what I know, which is very little given the way this preseason has unfolded, I have to think the Seahawks have a significant advantage in this game. They should be improved in very predictable ways, and were already superior to the Falcons coming into the offseason. This is one they have to win, even if it is ugly.

Grady Jarrett is a great interior disruptor. He will test the new core of the Seahawks offensive line, including Ethan Pocic at center and rookie Damian Lewis at left guard. He will pair with rookie defensive tackle Marlon Davidson to try and wreak havoc.

Either Takkarist McKinley or new free agent pass rusher Dante Fowler will get the matchup against Brandon Shell at right tackle. Shell has never been a good pass protector, and there is little reason to think he will be now.

Safety Keanu Neal is also back in the lineup after missing most of the season due to an achilles injury. He has been a major difference maker for them, especially against the run.

Deion Jones is an excellent coverage linebacker who will make life tough on at least one of the Seahawks tight ends.

Russell Wilson is pretty good. The Falcons secondary is not. Their best cornerback last year was Desmond Trufant, and he left the team in the offseason. This was one of the worst pass defenses in the league last year, and there is not a lot of reason to think they will be better this season.

D.K. Metcalf had just 3 catches for 13 yards in the first matchup, but also had 2 touchdowns. He should be poised for a huge first game of his second season. Tyler Lockett had 6 catches in 6 targets for 100 yards last year in Atlanta. That duo should give Falcons fans nightmares.

Seattle did not have Will Dissly at that point last season, and now add him and Greg Olsen to the attack. Jones can only cover one of them.

Duane Brown should be back to full health and will hopefully be ready to neutralize at least one of the Falcons edge rushers.

Like the Seahawks, the Falcons have a great wide receiver tandem in Julio Jones and Calvin Ridley. Matt Ryan is also still a very good quarterback, who can attack all parts of the field, and is difficult to slow down once he finds a rhythm.

The team has added Todd Gurley in the hopes he can kickstart their awful running game, but they will likely find out that running backs are not nearly as important as the line blocking for them.

Hayden Hurst was added at tight end, but replaces a great one in Austin Hooper, so it’s hard to say Atlanta has improved in that area.

Seattle has the makings of a terrific secondary on paper. The safety position is the most projectable, with Quandre Diggs and Jamal Adams immediately making this defense better against the run and the pass. There should be fewer blown assignments with them in the mix.

Shaquill Griffin enters his fourth season after making a big step forward last year. He will be paired with either Quinton Dunbar or Tre Flowers. It is unclear if Dunbar has had enough time to surpass Flowers on the depth chart, so the Falcons may catch a break getting the Seahawks early in the season.

Marquise Blair had a big statistical game when he started at safety against the Falcons last year with 11 tackles, including 9 solo. He also was part of the problem in the second half when the Falcons were passing with impunity. He returns at a new position and with lots of buzz as a nickel corner, which was a major weakness last season for Seattle. He may see some time against Hurst.

As bad as the Seahawks pass rush was last season, the Falcons offensive line might have been worse. They struggled mightily at left guard and right tackle, and even their more reliable players in left tackle Jake Matthews and center Alex Mack, had down years. Mack is old enough that his performance might be permanently on the decline.

This game represents a soft start for the scrutinized Seahawks pass rush. Ryan struggles when under pressure, but he rarely hold the ball long enough for it to happen. Good test for Seattle.

Younghoe Koo was a reliable kicker last year, although with only one kick over 50 yards. Jason Myers was mediocre. A big question will be whether Michael Dickson can return to form after a disappointing second season.