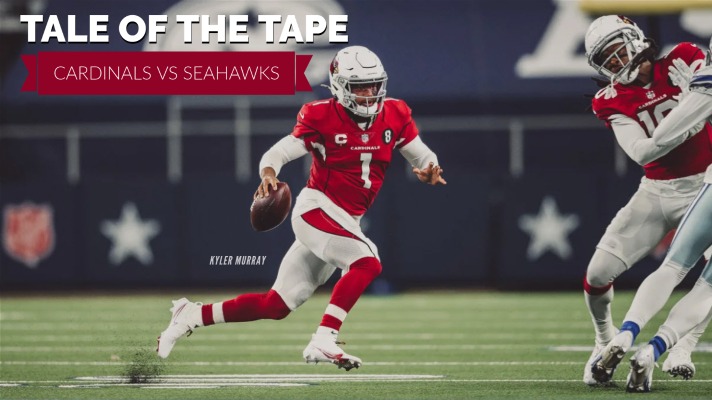 Tale of the Tape: Cardinals defense may be Seahawks toughest test so far

The Seahawks return from the bye week without a loss and on top of the NFC. They begin what looks to be their toughest stretch of the schedule with their first division contest against the Arizona Cardinals. The Cardinals are coming off of a dominant, if somewhat misleading, victory over the injury-riddled Cowboys.

Most people think about Kyler Murray and DeAndre Hopkins when talking about the Cardinals. No doubt, those two have star power. It is, however, the Cardinals defense that has my attention heading into this game. They rank second in the NFL in points allowed and seventh in yards per play. They are second in the red zone and seventh on 3rd downs. DVOA likes them as the 9th-best defense. Pro Football Focus is unimpressed, where they rank 19th in total defensive grade.

The best offense they have faced, per DVOA, is the 13th-ranked 49ers. The two times they have given up more than 25 points were against the 15th-ranked offense in Carolina and Detroit’s 19th-ranked offense at home. They lost both of those games.

They held the hapless Jets and Andy Dalton-led Cowboys to 10 points apiece. They lost their best pass rusher in Chandler Jones, but have playmakers like Budda Baker.

Seattle will get their best on Sunday, but it remains to be seen if that is good enough to slow down the best offense in football. This game would be more concerning if Seattle was not just coming off a bye where they were able to scout their division deeply and start installing counter moves to how opponents are trying to defend them.

Russell Wilson has played some of his best games in Arizona. He will need to be great again to secure a victory, and my bet is that he will be.

Baker is the best player on the Cardinals defense. He can cause problems in coverage, in run support or even blitzing.

Arizona features two tall corners in Dre Kirkpatrick (6’2″) and Patrick Peterson (6’1″). D.K. Metcalf will not have quite the same physical advantage he typically enjoys against other corners. He will need to beat these players with route running. Arizona has struggled to contain #1 and #2 receivers, ranking 15th and 24th, per Football Outsiders.

Byron Murphy is a solid nickel corner and has helped lead Arizona to a lofty 8th-ranked DVOA against slot receivers.

Watch out for Dennis Gardeck. He’s a tiny 6’0″ edge rusher who you probably have never heard of, but it taking a larger role with the injury to Jones. He had two sacks in his first game against the Jets two weeks ago, and then nearly had a sack/safety against the Cowboys.

Tyler Lockett would seem to have a chance for a nice game against either Peterson or Kirkpatrick. Neither should be able to keep up with his route running.

There should be some time for routes to develop with the Seahawks offensive line seeming to have an advantage over this Arizona front.

Wilson will need to be willing to check down to running backs. Arizona has struggled to defend running backs as receivers.

It will be interesting to see how Seattle chooses to attack Arizona. They are 10th in DVOA against both the pass and the run. The two teams who have beat them were pretty committed to the run, or at least having some balance in playcalling.

Murray is a bigger threat as a runner than as a passer so far this season. He is electric with the ball in his hands. Seattle will be tested time and again to contain his feet. I don’t love the matchup here given the relative speed of our linebackers and front four.

Jamal Adams coming back would be a big deal. The other name to watch would be Shaquem Griffin. This would be the perfect game to deploy his QB spy, zone dropper, role. It is hard for me to imagine Cody Barton making a tackle in the open field against Murray, or outrunning him to the edge.

Hopkins is one of the games best receivers. The Seahawks corners have played better of late when Quinton Dunbar is healthy. This will be a fascinating test given the Cardinals variety of receivers. Larry Fitzgerald is not the threat he once was, but Christian Kirk and Andy Isabella are quality role players who can stretch a defense.

Seattle is #1 in the NFL in takeaways. Arizona has given up their fair share. A turnover or two could be the difference in this one.

The Seahawks have the advantage of a little mystery in terms of whether Damon Harrison, Adams, Jordyn Brooks, Griffin, Damarious Randall and others will play and how they will be used.

They also may change up some things defensively coming out of the bye week.

Stopping Kenyan Drake on the ground is going to be important. If Seattle can do that, and limit the explosive rushes from Murray, Arizona will struggle to score.

Zane Gonzalez has already missed two kicks, and Andy Lee is not the punter he once was. Seattle has a big advantage in special teams, and should continue to benefit from superior field position.