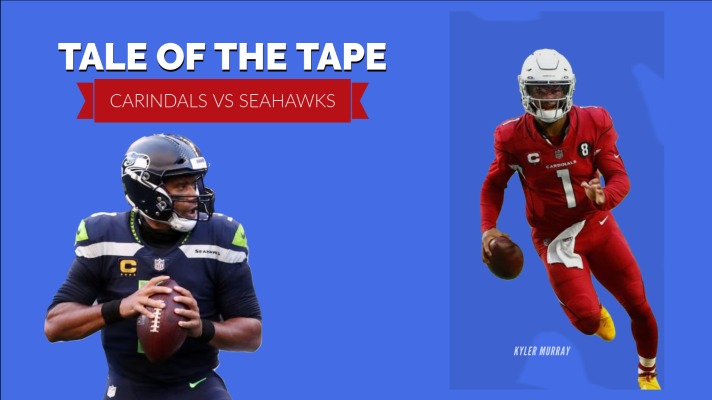 It has been a rough few weeks for the Seahawks. Seattle was undefeated the last time these two teams played, and should have remained that way. A series of blunders from a variety of players cost Seattle what should have been a relatively straightforward victory. They scored 27 points in the first half to build a 10 point lead, and were ahead by 10 points with less than seven minutes remaining in the game.

The story of that game was foolish mistakes by the Seahawks and a weak defense incapable of overcoming those mistakes. Arizona enters this game very fortunate to have not lost three straight. The Seahawks had them. The Dolphins beat them, and the Bills should have as well. Instead, they have won 2 of 3, and are in the catbirds seat for the NFC West.

Both teams enter the game missing some key pieces. The Cardinals are without most of their defensive line and their tight ends. Seattle is missing their corners and centers and possibly running backs and receivers.

The weather could play a factor in this game as rain is in the forecast. We know Wilson has typically struggled in wet weather, but we know less about how Kyler Murray holds up in those conditions.

Overall, I like the intangibles in this matchup in favor of the Seahawks. This should be as focused as Wilson has been in a long time. The defense has showed some glimpses of competence and should have a very different game plan going into this game that will create more pressure on Murray. The injuries on the Cardinals defensive line, the weather, and the return of some Seattle runners could give the Seahawks a chance to control the ball a bit more.

Expecting this Seahawks defense to shut down the offense that leads the NFL in yards per game is unrealistic. I do expect this to be a lower scoring affair than the first matchup. The first team to 27 points wins. Twenty-four may even be sufficient. I expect the Seahawks to win this one.

There are some key changes for the Cardinals on defense since we last saw them. Jonathan Joseph has been added and played his first game against the Bills last weekend. He has played some nickel corner. Markus Golden was acquired to add to their pass rush after Chandler Jones was lost for the year. Isaiah Simmons, their top pick, has been getting more playing time after making the pivotal interception against Seattle.

The big news is defensive tackle Corey Peters going on IR for the rest of the year. He is crucial to their interior line play. Their depth there is suspect, at best.

Seattle will be without Ethan Pocic, and could be without backup center Kyler Fuller. Mike Iupati should be able to play after missing the first contest.

Arizona did a good job on D.K. Metcalf in the first game. Most of the credit was given to Patrick Peterson, but that was likely overstated. Seattle was finding success elsewhere, including against Peterson. He is a decent matchup with Metcalf from a size and speed perspective, but their confidence in him could come back to bite them in this game.

They have had decent success sending blitzers and Seattle has not done well picking up the blitz lately. Being down two centers will hinder the line calls and could make the Seahawks even more susceptible to pressure.

Arizona has been scuffling on defense. They were 2nd in the NFL in points allowed before playing Seattle. They now rank 9th after giving up 30+ points in each of the last three games. Even the Seahawks defense has done better than that!

The Cardinals do not have the interior linemen to exploit the uncertainty at center for Seattle. Iupati returning is a boost as well. Look for Seattle to lean heavily on the left side of their line to create running room. This Cardinals team does not have the big bodies needed to withstand sustained push from a very good Seahawks line.

If Seattle can successfully run the ball and force the Cardinals to commit more men to the box, it should open up more in the passing game for Wilson.

The Cardinals have good-but-not-great corners. Peterson is overrated and declining. The Seattle performance was his only positive grade all year by PFF. Dre Kirkpatrick has struggled and Tyler Lockett torched him. If Lockett cannot play or is hampered, it will be more challenging for Seattle, but it may also allow the tight ends and running backs to get more involved.

You can almost be certain the Cardinals will send pressure in this one as teams have succeeded in that approach against Seattle lately. The upside is if the Seahawks can pick up the pressure, there will be open players to target.

I don’t expect this to be a pretty offensive game for Seattle, but it could be one of their more complete performances.

There are some changes on both sides here as well. J.R. Sweezy has returned to play guard in place of Justin Murray. Tight end Darrell Daniels is out with an injury, and they may be without tight end Maxx Williams as well. That could effect their blocking schemes. The remaining tight end is Dan Arnold, who at 220 lbs is more of a receiver than a blocker.

Seattle has Jamal Adams for this game after missing the first. Shaquill Griffin and Quinton Dunbar are likely to miss this one. Seattle also added Carlos Dunlap and Damon Harrison since these teams last met. DJ Reed is another new face, as is Rasheem Green.

Murray is a lightning bolt. He is hurting teams more with his legs than his arm, but he is dangerous with both. Seattle came into the last game determined to limit his scrambling, but their plan backfired when Murray had one of his most accurate passing performances as an NFL quarterback.

Seattle will definitely come into this game with more plans to pressure Murray, which could open up the runs he loves.

Arizona has scored 30+ points in five straight games. They have had 160+ rushing yards in four straight and over 200 yards rushing in two of those games. They have to be licking their chops at the idea of facing the Seahawks defense. That might work against them.

As bad as the Seahawks defense has been, they have shown some progress. The Seahawks rank 2nd in the NFL in sack rate over the past three weeks. They may get back Benson Mayowa, who could further help the pass rush by keeping Dunlap fresh.

Poona Ford has been the second-best defensive tackle in football over the past four weeks, according to PFF, behind only Aaron Donald.

Green has been flashing a bit, and could be on the verge of having an impactful game.

As bad as the corner play has been, Tre Flowers and DJ Reed were decent against the Rams.

This could be a game where the Cardinals come in feeling fat and happy and overconfident, and the Seahawks defense sneaks up and takes a bite out of them.

I realize how crazy it sounds to exhibit any optimism for this defense, but it’s just a hunch.

Seattle has a big advantage in special teams. A turnover by the Cardinals here or a big return by Seattle could be pivotal.