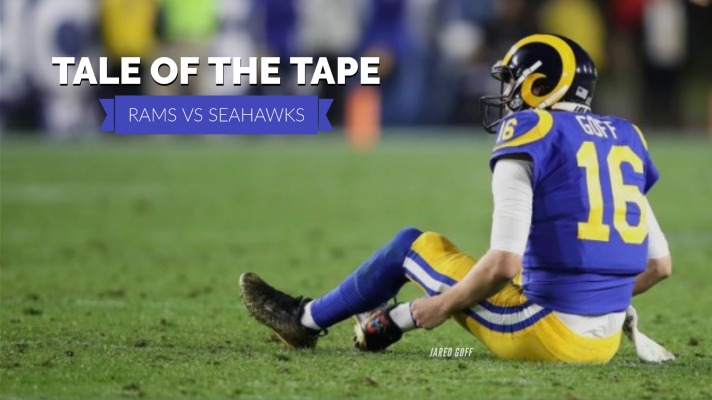 The Seahawks played terribly in Buffalo last weekend, being thoroughly outplayed for the first time all season. The road does not get any easier this week against an opponent that arguably is better equipped to give Seattle problems.

The Rams are an odd team. They feature absolute greatness in Aaron Donald, and what appears to be a very good defense. They have a very good coach in Sean McVay. They have weapons on offense, and a decent offensive line. Yet, they have been very up and down this year.

They fell behind by 25 points in Buffalo, barely beat the Giants, got dominated by the 49ers, and embarrassed by the Dolphins. Their wins have come against the Cowboys, Eagles, Giants, Washington, and Chicago. Not exactly a murderer’s row.

Every team that has scored at least 20 points against them has won. They have only scored more than 20 points four times.

Their offense looked completely inept against the Dolphins. Jared Goff was as bad as his rookie season, throwing passes into the dirt and to opponents.

Despite his sterling reputation among the analytics community, McVay has leaned heavily on the ground game the past few years. The Rams are one of the more run-heavy offenses in the league. That would seem to play into one of the few things the Seahawks defense does well, but as the Bills proved last week, a team can completely change their approach and be rewarded handsomely against this flailing Seahawks defense.

The Rams are 1.5 point favorites at this time of this article. Given the apparent strength of their defense and the seemingly impossibly bad play of the Seahawks defense, that feels fair. Los Angeles will win this game unless the Seahawks offense can score at least 25 points, and very well may need more than that.

Have I mentioned Donald? The guy is a wrecking ball. Seattle has had some success against him by featuring a determined run game, where Donald is not as good. He loves to attack the quarterback. The problem is Seattle probably will not have their top two backs, and has not shown the inclination or ability to sustain a running game this season as the pass attack has been so effective.

That could play right into the Rams hands. They are built to stop the pass. Outside of Donald, they feature arguably the best cornerback duo in the NFL. Jalen Ramsey is a name people recognize, but Darious Williams has been every bit as good. This is the first team that can legitimately leave their corners alone against the Seahawks dynamic receiver duo. At least, they will likely try.

The safeties are terrific as well. John Johnson and Taylor Rapp are fast and tough.

One of the biggest advantages for the Rams is coming off a bye week where they could study the Seahawks offense in detail. They will have a plan.

There is at least some question about what this defense has proven against largely inept offenses to this point. They have faced two top 10 offenses, from an efficiency standpoint, and have given up 24+ points in both games, losing both.

Seattle is the best offense they will have faced, by far. Even in defeat, the Seahawks gave the Rams something to think about this weekend by featuring the tight end more than they have during the season.

Jacob Hollister had a nice game, and could present some problems for a mediocre linebacker corps if he can get matched up against them.

Troy Hill is a good-but-not-great nickel corner. This could be a game where Tyler Lockett spends a lot of time in the slot while David Moore moves outside. It is the type of game that favors a guy like Lockett versus D.K. Metcalf.

Metcalf has beaten most of the corners he has faced. Having a good game against Ramsey would elevate his status to an even higher tier. It is not something the Seahawks can count on.

Kyle Shanahan put together a masterful game plan against the Rams a few weeks back that featured mostly horizontal stretch plays and very quick, short, passes that neutralized Donald’s ability to impact the game. That is not Russell Wilson’s strong suit. We should expect to see some jet sweeps to Moore or Lockett and some wide receiver screens to Metcalf.

It is unclear whether the Seahawks will utilize it, but their offensive line could have a big impact on the run game as the Rams are less stout there.

McVay is the key advantage here. He’s a smart dude, and has to see nothing but holes in this Seattle defense. Robert Woods is almost as quick as Stefon Diggs, and Seattle had absolutely no answer for Diggs last week.

Cooper Kupp is Goff’s favorite target, and he probably will be open a lot as well.

The Rams were overwhelmed by the Dolphins all-out Cover 0 blitzes in their last game. They never adjusted. McVay has to know the Seahawks will be blitzing a lot this week, not only due to the Dolphins success, but because it is all Seattle can do to generate pressure. McVay will have prepared Goff as much as possible over the past two weeks and they will have counter packages ready.

The advantage of McVay over Ken Norton Jr. is as large as any Seattle will face all year.

Goff turns the ball over a lot. The Rams are 25th in the NFL in giveaways. Goff has 8 TDs and 8 INTs in his career against the Seahawks. Believe it or not, the Seahawks have had the most success against Goff (82.9 passer rating) of any NFC West opponent.

One of the biggest surprises against the Bills was Josh Allen’s poise in the face of pressure. He had been someone who gave the ball away quite a bit. Seattle has been good at taking the ball away this year, and will need some good fortune on that front in this game.

Los Angeles likes to run the ball a lot. There is a very good chance we will see Damon Harrison for the first time this week given the injury to Bryan Mone. That could be a big factor and something the Rams could not have prepared for since Harrison has no tape this year.

The Rams have a solid left tackle in Andrew Whitworth, but their guards and center are vulnerable. Jarran Reed is coming off a 2.5 sack performance. He could add to his total this week. If Seattle can slow down the Rams run game, they may just have a shot to get after Goff.

I can’t quite see McVay abandoning the run the way the Bills did.

Seattle has a clear advantage in special teams. This would be a great game for Moore to break off a big return.