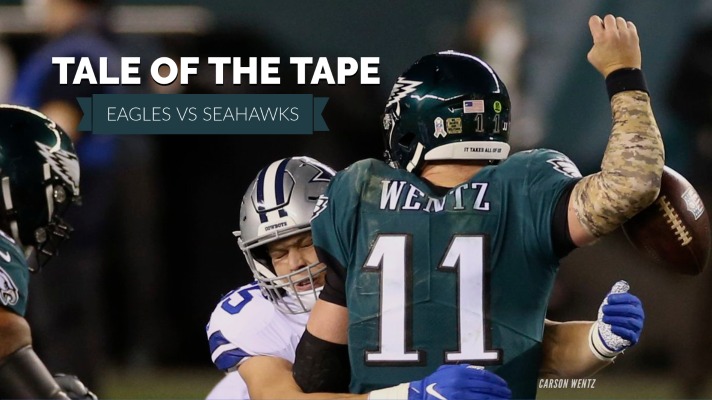 Seattle earned the right to consider this a critical stretch of games by beating a hot Arizona Cardinals club Thursday night. The Seahawks can still snag the coveted top seed in the NFC and a bye week, but they really will need to win all of their remaining games to do so. The next four contests are against struggling teams who will be underdogs against Seattle. It would be easy to overlook any of these teams, but that would be a mistake. Starting with this game in Philadelphia, Seattle will face three teams with legitimate shots at winning their division who will be looking for a signature win to legitimize their season.

The Eagles are a very different team than Seattle has faced thus far. They have a fantastic pass rush, a strong defense overall, and a very weak offense. Carson Wentz, their quarterback, has been in disarray all season. He is under major fire in a tough town, with questions continuing over whether rookie Jalen Hurts should get more snaps. Head coach Doug Pederson reiterated that Wentz was the starter after another moribund performance from Wentz in Cleveland.

Oddly, the Eagles benefit from the lack of fans at their stadium for this game. Wentz would almost certainly hear boos (and worse) if he started slow. Instead, he has a chance to make a stand and prove he still is a good player.

This is a game where the Seahawks defense has a chance to gain confidence and lower the bar for their offense. The Eagles should not score 20 points. Seattle’s offense will face a tough defense while likely being without starting right tackle Brandon Shell. Scoring 24 points should be enough to win this game. I think they can do that.

Seattle has been declining in their pass protection of late. That has often been on blitzes. Seattle has been playing with backup centers for the past two weeks as well. Ethan Pocic is set to return in this one.

Philly relies on a dominant pass rush to be effective defensively as their secondary is not great. Even corner Darius Slay, who they traded for this offseason, is giving up a 73% completion rate and a passer rating over 103 to opposing quarterbacks.

Expect the Eagles to attack whoever replaces Shell at right tackle. This is a game where keeping the defense off-balance with some running plays and screens is going to be key.

The Eagles could not guard D.K. Metcalf a year ago. He should get another chance to stand out in this game. Slay has been far from a shutdown corner, and does not have the size to contend with Metcalf. Slay is their tallest corner at 6’0″, and a guy like Avonte Maddox stands at just 5’9″.

Cornerback Cre’Von LeBlanc was put on IR this week after being injured in the Browns game. He mostly played nickel corner, and that means more snaps for Nickell Robey-Coleman, who has struggled. The linebackers have struggled in coverage as well.

The Eagles are 28th in defending #2 receivers, 27th in defending the tight end, and 30th in defending running backs as receivers out of the backfield, per FootballOutsiders.com. If the line can protect and Russell Wilson can have a realistic expectation of time in pocket, the offense can move the ball against this defense.

Fletcher Cox left the last game due to injury, so that is worth monitoring.

Jacob Hollister played an important role against the Eagles last season. He and Will Dissly could find themselves thrust into focus here.

Chris Carson’s return will be welcome, and gives the team a complete back. The combination of Carson and Carlos Hyde will take handoffs for the first time in over a month.

The absolute key to this game is Wilson, though. He must be willing to take what the defense gives him or throw the ball away. If he gets stubborn and holds the ball too long, the chances for debilitating turnovers grows substantially.

It is worth noting that the Eagles defense has piled up their numbers against some of the worst offenses in the NFL. Seattle will be the best offense they have faced. The previous two best offenses were the 16th-ranked Steelers and the 5th-ranked Rams, who scored 38 and 37 points, respectively.

It may be a week too early to get Zach Ertz back, but he could return this week. That would be a big boost to an offense and quarterback who love to utilize the tight end position. Richard Rodgers and Dallas Goedert have done well while Ertz has been injured.

Travis Fulgham has made some big plays for the Eagles this season, and will challenge Seattle deep.

Miles Sanders is an effective runner. The Eagles will certainly want to give him the ball a fair amount considering the struggles of the offensive line in pass protection and the quarterback in throwing the ball.

There are not a lot of weapons on offense.

There are a few injuries to watch on this side of the ball. Center Jason Kelce is one of their best linemen, and he injured his arm badly enough in the Browns game that he needed a teammate to snap his helmet strap for him. There has been no word on the status of that injury since the game ended, but even if he plays with limited strength in that arm, it would be a notable advantage for Seattle.

Should Kelce either miss the game or need to leave, Luke Juriga would step in. He has played all of four snaps in his career.

Right tackle Lane Johnson also left the last game due to injury. There is reason to believe he will not play this week, which could mean someone like Jack Driscoll steps in. Given that Carlos Dunlap has shown he can be effective rushing from either side of the line, this could create some opportunities for him to wreak havoc.

Left tackle Jason Peters has struggled this season as well. This is not an Eagles line that requires an opponent to blitz to create pressure. They are pretty bad. In fact, they have given up more sacks per play when an opponent does not blitz than when they do.

There are not any game breakers on the Eagles offense. Fulgham is probably their biggest threat in terms of big plays with DeSean Jackson injured. Sanders is a key part of the offense and Seattle will need to key on him throughout.

Seattle has only created one takeaway in the past three games. The Eagles are 30th in the NFL in giveaways. The Seahawks defense should be targeting at least two in this game. If they can do that, the rest of the game should fall into place.

The Eagles have struggled in the kicking game as well. Jake Elliott has missed a number of kicks and Philly has no return game to speak of. Keep on eye on D.J. Reed on kickoff returns. He has been close to breaking one.