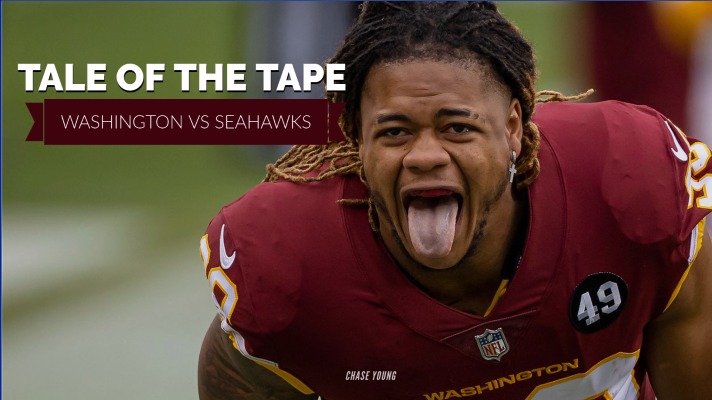 The Seahawks earned a few more words this week with a “did their job” victory over the Jets. As nice as the 40-3 margin of victory was for frazzled Seahawks fans, it proved very little. There was almost no feat the Seahawks could perform against the Jets that would have raised the team’s ceiling for this season. That changes this week against one of the best and hottest defenses in all the NFL.

The Washington Football Team (pick a mascot, please) is blessed with a dominant defensive line and quality pieces at every level. They have laid waste to offenses for weeks, not allowing more than 17 points in the last four games. They have held six opponents under 20 points on the season. They are undefeated in those games. They are winless (0-7) when their opponent scores 20 points or more.

That seems like a low bar for the 3rd ranked scoring offense in the NFL, but the Seahawks scored just 10 offensive points against the Giants recently, just 23 against the Eagles, and 16 against the Rams. The Seahawks offense has yet to prove it can compete with great defenses.

This is one of the most talented defensive lines in the league. Littered with first round picks, the Washington team comes at offenses in waves. They come from the inside with Jonathan Allen and Daron Payne. They come from the edge with Chase Young and Montez Sweat. They even have a guy who might be the Seahawks best pass rusher if he was on the roster coming off the bench in Ryan Kerrigan. These guys are loaded.

The status of the right tackle position is a critical aspect of this game. If Brandon Shell can play, the Seahawks have a shot to compete with this line. If Cedric Ogbuehi or Chad Wheeler has to play, the Seahawks passing game may be DOA.

The strength of the Washington defensive line makes the rest of the defense look better. Ronald Darby is their best corner, but DK Metcalf beat him multiple times last year in Philly. There may not be a player on Washington who can slow Metcalf.

Jimmy Moreland is a weak link at nickel corner who could be exploited by Tyler Lockett.

There are also some linebackers, like Jon Bostic who can be beaten in the passing game. Jacob Hollister or Will Dissly could factor in.

The one part of the offensive performance against the Jets that did peak my interest was the run game. New York actually has one of the better run defenses in the league, and Seattle dominated them. Washington is a good run defense, but not as good as the Jets.

Washington is 1-7 when allowing 100 or more yards rushing

It would make a lot of sense for the Seahawks to lean on the running attack in this one.

When they have faced an offense ranked in the top 15 this season, they are 0-4 and have allowed 30+ points in each of those games.

If you broaden to offenses ranked better than 20th, they are 0-5 and have allowed 30+ points in all of those games. The Cardinals, Browns, Ravens, Rams, and Lions have all scored 30 or more against this defense. Some of that might have been due to turnovers, but the point remains that good offenses have put up points on this team.

Washington has a few weapons of note. Terry McLaurin is a fantastic wide receiver who manages to be productive even with some of the worst quarterbacks in the league passing to him.

Antonio Gipson is a very good running back, who may not be able to play due to injury. He missed the last game. J.D. McKissic filled in, and Seahawks fans remember his ability to run and catch. He’s a nice player, if not a dominant one.

The Washington offensive line is very good. Their left tackle, Geron Christian Sr., is the weakest of the bunch, but it not terrible.

Washington quarterbacks have been sacked a bunch, but that has more to do with the quarterbacks than it does with the blocking of the line.

Seattle has been one of the best defenses in the NFL over the last six weeks, dating back to the Rams game.

The Seahawks are 5th in yards per play allowed, 6th in yards per game, 1st in sacks, and 9th in points per game. They are playing better football no matter how you qualify it.

They have seen better play along the defensive line and significantly improved play in the secondary. Quinton Dunbar figures to be back this week and get some snaps against his old team.

Washington may need to revert to Duane Haskins at quarterback as Alex Smith left the last game with an injury and his status is unknown. Neither option at quarterback is particularly strong, but Smith gives the team a better shot to win.

Washington has managed more than 400 yards of offense just twice all season. Ironically, they lost both of those games. Seattle has had plenty of chances to get their first defensive touchdown the past few weeks. This would be a logical game for it to happen, and Dunbar might be the guy to get it.

If Dunbar is back, that could mean more return duties for DJ Reed, who could exploit a bad Washington kick coverage unit.