Tale of the Tape: Seahawks Should Beat the Jags, But Will They? 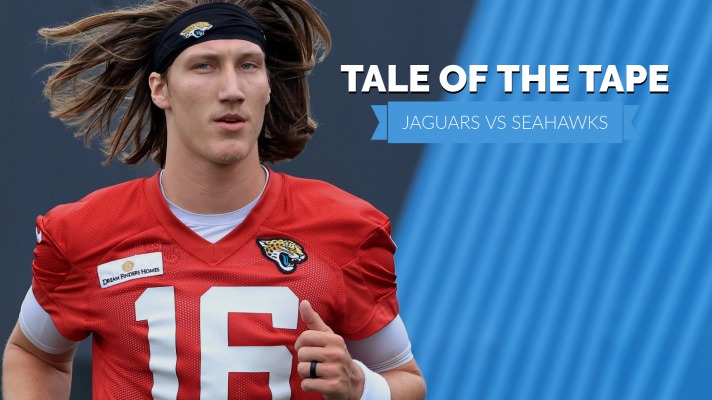 Every NFL fan will be finding ways to tune in when the 2-5 Seattle Seahawks square off against the 1-5 Jacksonville Jaguars this Sunday. A pillow fight of epic proportions will take place in Lumen Field with Geno Smith making his third start in place of the injured Russell Wilson, while the shampoo commercial known as rookie Trevor Lawrence takes aim at the Seahawks secondary.

They are coming off their first win against the Dolphins and have had a bye week to prepare. They have the better quarterback and the better pass rush. Seattle should win this game. Jacksonville has a very good shot at the upset. Slight lean toward Seattle here.

The Jaguars are near the bottom of the NFL in sack rate, but feature two quality edge rushers in Josh Allen (the other one) and Dawaune Smoot. Seattle might be playing with Jamarco Jones or Jake Curhan at right tackle, which could be trouble. Kyle Fuller is still the Seahawks center, and anyone facing him has an advantage.

Jacksonville has a far better run defense than pass defense, leading the NFL in limiting opponent explosive rushes and 5th in YPC. Seattle probably will bang their heads against that wall again even though it is the strength of the defense.

Seattle has advantages in the receiving and tight end room. Smith has been mostly incapable of utilizing these players. One hope might be to utilize more screen and short passes that may be acceptable to the coaching staff from a risk perspective and give some playmakers space to work.

James Robinson is a good back. He will test the improved Seahawks run defense. Marvin Jones Jr. is their best receiver.

Lawrence has played like a rookie, but has put up big yardage totals. He may be able to get away with field goals depending on how the Seahawks offense performs.

The Seahawks defense has played well the past few weeks. The run defense has been very good. The coverage has improved and the tackling has been good as well. Pass pressure remains the big problem, and that might not change this week despite a poor Jags line. Lawrence gets rid of the ball pretty quickly and the Jags are 9th in allowed sack rate.

Jacksonville turns the ball over a lot. That could be the key.

These are two of the worst special teams in football, although the Jags do have a kick return for a TD.