From Leo to SAM, meet your new defensive front

The acquisition of Kentwan Balmer and trade of Lawrence Jackson have led to numerous conversations about why one first round bust would be any more desirable than another. I found myself explaining the Seahawks new scheme to a few people, and though the rest of you may find it valuable as well.

The Seahawks have been a 4-3 defense for as long as I can remember. That is, four defensive lineman, and three linebackers. The ideal defensive end was generally 6’3″-6’6″, weighed between 265-285 lbs and had the combination of speed and strength to rush the passer while also holding the edges on running plays. Defensive tackles varied from the massive run stuffers to the bowling ball gap crashers, with sizes ranging from Chuck Darby to Sam Adams.
Linebackers included the SAM (strongside) LB that lines up across from the TE, the WILL (weakside) LB, and the MIKE (middle) LB. SAM LBs tend to be larger, knowing that they will tangle with the TE more often. WILL LBs tend to be your best open-field tacklers, and may be your fastest linebackers as they need to be comfortable in open space. Middle LBs are often the field generals who are intended to patrol sideline to sideline, fill the gaps left by the d-line, and cover receivers in the short-middle of the field.
The 2010 Seahawks will feature a 4-3 defense, in that it will have four lineman and three LBs, but it will play a lot like a 3-4. That might sound confusing, but stick with me because it really is pretty simple.
There are three significant differences from a typical 4-3 alignment:
You will sometimes hear the strongside DE be referred to as a “5-technique” lineman. That means he lines up with his nose on the outside shoulder of the offensive tackle, in-between the tackle and the TE.
It should look something like this: 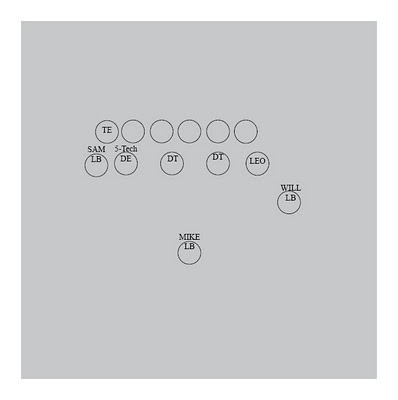 There are few implications to playing this sort of defense. First, you obviously covet a larger 5-technique DE than normal since he will be asked to occupy two blockers on almost every down. Second, you need a SAM LB that is an effective pass rusher since they play the role a typical DE plays while the 5-technique occupies blockers. The SAM must also be quick to recognize running plays or screens since there will be little help behind them if they let the RB slip past them. The very first play of the Titans game was an example of what happens when the SAM doesn’t seal the corner.
Third, the LEO must be a terrific pass rusher. He will be facing the opposing LT, and will be the only player constantly going after the QB. The Seahawks have decided a good LEO is going to be around 250 lbs. He will be light by NFL standards, but will have the WILL and MIKE backing him up. Chris Clemons (254 lbs) is the starter here, with Nick Reed (247 lbs) and Ricky Foley (245 lbs) fighting to back him up.
When you have one defensive end that being asked to play like a DT, and likely weigh north of 300 lbs, and the other defensive end being asked to be a speed pass rusher weighing closer to 250 lbs, a 275 lb defensive end like Lawrence Jackson has a hard time finding a home. Similarly, a 315 lb lineman like Kentwan Balmer has a better chance to fit in.
Things to watch for with this new alignment will range from whether Aaron Curry and Red Bryant can keep teams from running around them to the outside, to whether Chris Clemons is strong enough to hold the edge against LTs across the NFL. The MIKE is critical to help support all across the line.
Give the coaches credit for designing a defense that lends itself to the strengths of their personnel, but not too much credit until we see it work.
Start typing to see results or hit ESC to close
real hawk talk softy russell wilson 49ers rams
See all results