One of the best parts about being a sports fan is when you know something before the casual fans, superficial local media, and national experts. You know this thing, not because you are smarter than those folks, but because you are interested enough to pay attention to details while others simply regurgitate. The state of the Seahawks secondary may be the best example of this right now. Ask any national expert, and they will tell you the Seahawks should have signed Jonathan Joseph or Antonio Cromartie. They will tell you they have no depth at the CB position. The casual fan and radio show host will see Kelly Jennings out there and think it’s more of the same crap we’ve seen the past few years. They are all wrong. Pete Carroll and John Schneider have made over the blindingly bad roster they inherited in 2009, and no place demonstrates the shift more than the secondary.

Be warned, reading the following may result in an upset stomach. Let’s look back at the 2009 secondary Carroll and Schneider inherited: 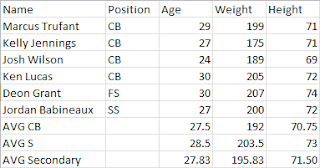 In truth, this was not the worst crap the Seahawks have run out in the secondary. Babineaux was a disaster as a starter, and Josh Wilson and Kelly Jennings were hopeless against receivers over 6’0″ tall, but there was some talent in there. They managed a combined 10 interceptions and 2.5 sacks. At 24, Josh Wilson was the only player with legitimate upside in that group.  Note that the average height of the top four corners was under 6’0″, and their average weight was close to 190 lbs. Now, take a look at the likely 2011 secondary for the Seahawks: 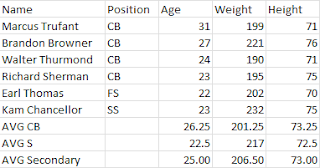 I’ll be the first to point out Roy Lewis is not listed, and would be in the top four, when healthy. He is not healthy right now, and will likely start the year on PUP, so let’s stick with guys who should start the year filling these roles. The first thing that jumps out at me is that even with Marcus Trufant two years older and Brandon Browner brought in as a 27-year-old free agent, the secondary is still far younger. Earl Thomas is still a baby, and he had half as many interceptions (5) as the entire 2009 secondary during his rookie campaign. The rest of these players are largely unknown, but each have legitimate upside potential. Carroll employs a very different defensive philosophy than the one Mora Jr. ran out in 2009. There is a much greater emphasis on press coverage and assistance from the safeties. There is a reason there were no All-American cornerbacks out of USC during Carroll’s tenure and multiple impact safeties like Troy Polomalu and Taylor Mays.

The job of the cornerback is much more simple. They need to get their hands on the opposing receiver, and then be able to turn, run, and understand where their help will be coming from. There will be very few instances where these guys will be left out on an island to shut down a receiver 1-on-1. Browner and Sherman are great examples of just how different the corner in Carroll’s defense will look. Both guys are over 6’3″ and are extremely physical. They can press, run and can compete for the ball in the air. They are also both strong in run support. Browner checks in at over 220 lbs, which is unheard of for a corner. Time will tell if he gets exposed, but in the four practices and one pre-season game I’ve seen, he’s been the best corner on the field without question. Sherman has flashed in practice, but is not as consistent as Browner. Both guys will struggle if the receiver can avoid their jam at the line. Seahawks fans may start to hate those evasive little receivers like Steve Smith more than the towering guys like Larry Fitzgerald. Fitzgerald will no longer be able to pat Kelly Jennings on the head with one hand while catching the ball above him with the other.

Kam Chancellor joins Thomas to create a safety tandem with as much potential as any in the NFL, and any in Seahawks history. Nobody can truly estimate Chancellor’s upside yet. Thomas may end up being the best player at his position in the NFL. He has that ability. Chancellor looks more and more like Pro Bowls are not out of the question. Remember the 2.5 sacks the 2009 secondary had as a whole? Lawyer Milloy had 4.0 all by himself last year. Chancellor will be used in much the same way, and has shown great blitzing instincts in practice. He also is better in coverage, and has the hitting ability to force a number of fumbles.

All of this doesn’t even take into account Walter Thurmond or Roy Lewis. Thurmond is just the coaches likely choice to start and a former All-American corner for University of Oregon who is supposed to be back from an injury. Lewis was among the top corners in all the NFL last season as a slot player. He allowed the 6th lowest completion percentage against him, and was in a list with players like Darrelle Revis. This is not your father’s Seahawks secondary.

These changes in the cornerback position are not accidental. The coaching staff wanted to get younger, taller and stronger. Check, check and check. 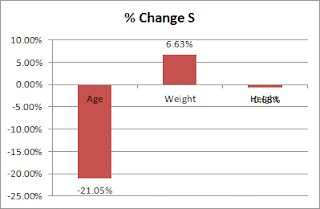 That’s some serious ageism Pete and John! The emphasis on building around the safety position is obvious. The front office filled both of those positions in their first draft class. Note, that this was not where they got taller. They did add some serious bulk in the form of linebacker-like Chancellor, which indicates how they are one of the remaining NFL teams that plays a true strong safety. Other teams have started to play two interchangeable safeties. Seattle will use Chancellor near the line of scrimmage and to cover tight ends. You will not see him on slot receivers anytime soon. 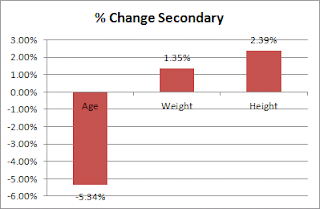 The overall group gets far younger, and moderately taller and stronger. Bringing in a older cornerback could make some sense, but that would mean the money would be spent there instead of another position that is likely in greater need, and would keep one of these talented youngsters from getting on the field to grow. Carroll and Schneider are not building to win just in 2011. You may have heard there is some desire to win forever. Getting younger and more talented in the secondary is a huge part of that mission.