HAWK BLOGGER 2011 SEASON PREVIEW PART I OF III: The Franchise
Players are told to approach each game one play at a time and each season one game at a time. Coaches and general managers build up their rosters and teams one season at a time. Fans are different. Seahawks fans have been around long before any current coaches, players, general managers, or even owners, and will be here long after they are gone. Fans endure. Seahawks fans have endured playoff droughts that last more than 10 years. They have endured referees that feel so bad about the quality of their championship calls, that they feel compelled to come forward and apologize years later. Being a fan allows for a big picture perspective that nobody else can afford. History is always the best predictor of the future. Even while some teams have broken from their franchise histories in recent years (e.g., Patriots become champions, 49ers become a joke), much can be learned by exploring the patterns across generations. Before diving into the detail of this 36th season of Seahawks football, take a moment to see what history tells us about how things may unfold.

FRANCHISE QUARTERBACKS
It all starts with the most important position on the field, the quarterback. This season is already historic in that it marks only the 8th time the Seahawks will open the season with a new starting quarterback. Matt Hasselbeck enjoyed the longest stint as opening day starter in franchise history, starting the last 10 seasons for the Seahawks. Dave Krieg and Jim Zorn each opened eight seasons as the starter. The franchise history at QB looks like this:


That is a rather remarkable level of stability at the QB position, especially for a franchise that has yet to win a Super Bowl. Hasselbeck’s tenure was not only the longest, but the most successful with six playoff appearances. All the other QB’s combined only have five playoff appearances. Tarvaris Jackson will enter this season hoping to avoid joining Kelly Stouffer as the only Seahawks quarterback to be a 1-year opening day starter. Stouffer made it until the 5th game before yielding to Dan McGwire who eventually gave way to Stan Gelbaugh. That was the worst season in Seahawks franchise history, setting the NFL record for fewest points scored in a season. See this story for some eerie similarities between the 2011 Seahawks and the 1992 Seahawks, including the decision to move on from an established franchise quarterback.

The Seahawks are a combined 48-62 in the first year under a new quarterback, but that includes the franchises first season (2-12) with Zorn. A better indicator may be the effect on team win totals from the previous year. For example, the team upped their win total from 9 to 12 in Krieg’s first season as opening day starter. From that lens, the Seahawks are +7 in wins in the first year of a new opening-day starter. In fact, the only time the team win total declined in a year with a new starting QB was in 1992, when the team dropped five wins during the change from Krieg to Stouffer.

TEAM STRENGTH
There are many ways to judge team performance, but point differential is a great way to get a quick overview.   The Seahawks have outscored their opponents in 15 of their 35 seasons. Their peak being during the 2005 Super Bowl season, and the floor being the inaugural season in 1976. Pete Carroll inherited a team that was trending down from +102 in 2007 to -98 in 2008 to -110 in 2009. The team was able to stop the free-fall in 2010, but still had the franchise’s 6th-worst point differential. Three of those bottom six have come in the last three seasons. That paints a rather grim picture that the team has been struggling both to score points and to keep opponents from scoring. The franchise total differential, over 35 seasons, works out to -498. That

means the Seahawks have been outscored by an average of 0.90 points per game. Think about that. After playing 556 regular season games, the Seahawks have played their opponents almost to a standstill, separated by less than 1 point per game. The sunny spin on that would be to say the franchise is competitive. The gloomier interpretation is that this franchise is defined by mediocrity. That can be the kiss of death in the NFL. Mediocre teams are rarely bad enough to land the franchise-defining talent found at the top of NFL drafts, but also not good enough to win the ultimate prize in a Super Bowl ring.  Only four Seahawks teams have had a negative point differential and a winning record. None have had more than nine victories.

BATTLING MEDIOCRITY
Take a look at how often the franchise had churned out teams that won between seven and nine games.

Nineteen of the thirty-five seasons have resulted in victory totals between seven and nine. Only five times has the team won at least 10 games, and only twice has the team won fewer than four games. By those odds, the Seahawks have over a 54% chance of ending 2011 with 7-9 victories. Those fans holding out hope for a season so disastrous that a player like Andrew Luck could be drafted, keep in mind franchise history shows less than a 6% chance of the 2011 squad winning fewer than four games. Carroll and GM John Schneider saw to a two-game improvement in the win total from 2009.  Chuck Know remains the franchise record-holder with a 5-game improvement in his first season as Head Coach. Mike Holmgren led a one-game improvement, and Dennis Erickson saw his team improve their previous season’s win total by two.

DIVISION FINISH
Carroll and Schneider led the 2010 Seahawks to the franchise’s seventh division title, and fifth in the last seven 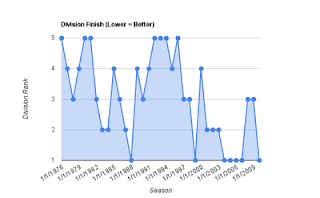 seasons. The move to the NFC West has treated the Seahawks well. After only winning one division title before 1999, and only two in all their years in the AFC West, the Seahawks have won five NFC West division titles in only nine seasons. Much was made of the 2010 squad being the first NFL team to win a division or make the playoffs with a losing record. Seven division titles in 35 seasons should tell fans all they need to know about savoring those accomplishments no matter how much ridicule others may spew. While the Seahawks entered the NFC West with powerhouse teams like the 49ers and the Rams being led by quarterbacks like Kurt Warner and Jeff Garcia, the division has been ripe for the taking as each opponent has fallen on hard times. Warner came back to lead the Cardinals to a couple division titles, but it wasn’t until Sam Bradford and Kevin Kolb entered  the picture this season that it could reasonably be argued the NFC West quarterback play was on an upswing. Carroll will have his work cut out for him to match Holmgren’s starting sprint with the Seahawks when he led the team to either a 1st or 2nd place finish in eight of his first nine seasons with the franchise.


OFFENSE
Scoring a lot of points has always been a key to producing winning Seattle football teams. The Seahawks 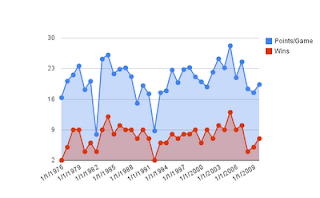 averaged 25.7 points per game in the five seasons that produced at least 10 wins. That scoring pace would have made the Seahawks 5th in the NFL in scoring last season, as a bit of context. Instead, the Seahawks settled for minor improvement from 17.50 pts/game in 2009 to 19.38 in 2010. That’s a notable improvement, especially after team scoring dropped 30% from 2007 to 2009. Note in the graph to the left  that scoring has a rather strong correlation to team victories. The team’s best scoring season happened during the 2005 Super Bowl run. Some franchises are built around defense. The Seahawks seem to depend much more on a powerful offense. Carroll and Schneider chose to prioritize that in the off-season, making their biggest additions on the offensive side of the ball. They need the improvement to continue as the Seahawks average only 5.7 wins in seasons where the offense scores less than 20 points per game, and have been over .500 only twice.

DEFENSE
Carroll came to Seattle with a reputation built on defense. He was a defensive player in college, coached 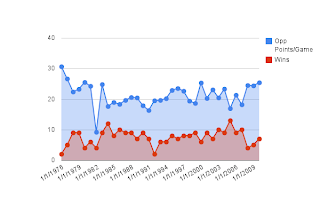 defense in college and the NFL, and made most of his initial changes to scheme in Seattle on the defensive side of the ball. The results were mixed. Only three Seahawks teams have allowed more than the 25.4 points per game Seattle gave up last season, and none since 1980. Outside of 2003, when they gave up 20.44 points/game, all of the Seahawks 10+ win seasons have featured a defense that gives up 18 points or less. That would have ranked as 5th-best in the NFL last season. Score 25+ and give up 18 or less. That’s the goal. There are signs the defense is improving despite the amount of points yielded last season. Some of the problem continues to be an offense that is struggling to stay on the field. More importantly, though, is the age of the defense. The secondary, in particular, has undergone a major youth movement. Defense has not correlated as strongly to Seahawks victory totals over the years as offense. Carroll may be the most defensive-minded coach at the helm outside of Jim Mora Jr. It will be interesting to see how much he breaks the franchise from tradition. Many of the most memorable players in franchise history were defenders. Players like Jeff Bryant, Jacob Green, Kenny Easley, Cortez Kennedy, Sam Adams, Chad Brown, Rufus Porter, Lofa Tatupu, and many others. Time will tell if this current crop of Seahawks defenders will add their names to that list.

THE JOURNEY
Some will say that a team that played in 1984 has nothing to do with one that plays in 2011. There are different coaches, owners, players, rules, opponents and virtually nothing shared. One critical thing that is shared is fans. A coach may tell the media there is nothing special about playing a 10AM PST road game, but Seahawks fans know better. A general manager may say that the overall talent of a team is more important than any one individual player like a quarterback, but Seahawks fans know the difference between Kelly Stouffer and Dave Krieg. Even the NFL Defensive Player Of The Year could not stop a Stouffer/McGwire/Gelbaugh-led 1992 team from a massive free-fall. Carroll and Schneider inherited a franchise in its own free-fall. The offense was deteriorating and the numbers were collapsing. The same thing was happening on the defensive side of the ball. History shows that the Seahawks are championship contenders when they score over 25 points/game and allow less than 18/game. That represents a 13.5-point swing from what they inherited in 2009. They increased offensive output by almost two points, and reduced defensive effectiveness by over a point. In other words, they are about 1 point down the road to that 13.5-point change they must target. The fact that they were able to gain any momentum at all, let alone a division title and playoff victory, while overhauling the roster was a commendable feat. In fact, Carroll becomes only the third coach in franchise history to win a playoff game.

There are signs of rejuvenation taking root, but as we will explore more deeply in part two of the Hawk Blogger 2011 Season Preview, there are significant obstacles ahead in the immediate future. Turbulence over the course of one season means nothing in the big picture. Carroll and Schneider must continue to focus on finding footholds with which to push the franchise forward. Fans have been around long enough to know when something is moving in the right direction.