50 yard line on an american football field
To Suck, Or Not To Suck is a series exploring whether franchises have a better chance of winning a Super Bowl by suffering through some terrible seasons to get higher draft choices, or whether winning begets more winning. Each article will look at this question from a different angle. All will be based on quantifiable data. Varying interpretations and debate are highly encouraged!

Part I of this series focused on where Super Bowl winning quarterbacks are drafted. Part II looked at where All-Pro players, the best of the best, are drafted. This installment will examine the theory that a franchise that gets a number of high draft picks due to bad records can turn those into a Super Bowl winning foundation of talent. I looked at this from a few different angles. First, we will look at the last ten Super Bowl winners and examine the seasons preceding their championship. How many losing seasons did they have? How many Top 10 draft picks in the years prior to their big win? Next, we will see how teams that have had the most Top 10 picks in the last ten years are faring.

The last ten Super Bowl winners are as follows:

Their combined winning percentage in the three years preceding their Super Bowl victories was 0.602. That translates to about 10 wins per season. None of the ten teams had more than one losing season in the three years prior to their championship. If you add up the three seasons each team had before their championship, you would have 30 seasons (10 Super Bowl winners multiplied by three seasons each). Of those 30 seasons, only six were below .500. This does not seem to support the idea that teams can “pop” from losers to champions.

Three years is not a large sample size, so let’s look back 10 years prior to their championships. Again, for the 2010 Packers, this would mean we would look at their 2000-2009 seasons. For the 2009 Saints, we look at their 1999-2008 seasons, and so on. The combined winning percentage in the ten years preceding these teams Super Bowl championships was 0.553. That translates to around 9 wins per season. Only three teams had more than three seasons with below .500 records in the ten years leading up to their win. In other words, 70% of the teams had winning records at least seven out of ten seasons before their championship. The 2002 Tampa Bay Bucs had the most, at five seasons of below .500 ball in the ten years before their win. Interestingly, none of those losing seasons came within three years of winning it all. The Giants and 2001 Patriots had four losing seasons. Every team had at least two losing seasons in the previous ten. Only the Bucs appeared to be consistent losers anywhere near the time they won the championship. Most of these teams were perpetual winners.

Maybe they struck it rich during one of those below .500 seasons with a franchise-defining draft pick. I looked back at the five years of drafts prior to the Super Bowl season of each team to see how many Top 10 picks each had, and who they drafted.

The only player you could argue keyed a Super Bowl run of those Top 10 picks is Eli Manning. Even then, most would credit that Giants defensive line and running game as being the key elements of that team. Those that do believe Manning was the key cog would have to acknowledge that the construction of that 2007 Giants team was not a blueprint anyone should emulate. Richard Seymour, BJ Raji and Reggie Bush played important roles in their teams championship runs, but it is hard to believe their teams could not have won without them.

Look at the flip-side. Which teams have had the most Top 10 picks in the last ten years (since 2001)? 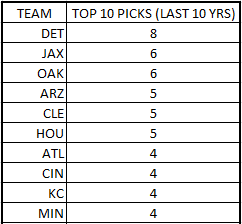 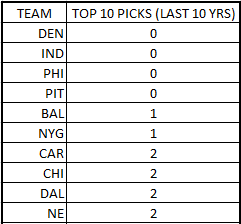 This group, by contrast, has all but two (NOR, GNB) of the last ten Super Bowl winners represented. It also has 15 of the last 20 teams to have appeared in the Super Bowl. Think about that. This is a decade of football. Teams that are battling for the ring are rarely finishing in the bottom third of the league.

If your team is drafting in the Top 10 next year, evidence suggests your franchise is at least five years away from winning it all. Sure, it’s possible that your team drafts the next great quarterback, but being bad enough to get him likely means your franchise is a long ways away from the game that really matters. The better path appears to be winning a lot, for as many seasons as you can. Seems kind of obvious, right? First round draft picks clearly matter, but winning franchises consistently turn players in the bottom half of the first round into stars. Pete Carroll gets a lot of grief for his “Win Forever” philosophy, but he may be on to something. Winning is a habit. Losing is too.