the soccer stadium with the bright lights
To Suck, Or Not To Suck is a series exploring whether franchises have a better chance of winning a Super Bowl by suffering through some terrible seasons to get higher draft choices, or whether winning begets more winning. Each article will look at this question from a different angle. All will be based on quantifiable data. Varying interpretations and debate are highly encouraged!

PART V: The Overstated Franchise QB
Franchise quarterbacks are almost mythical creatures in the NFL. Everybody is on a quest to find one outside of the handful of teams that already have one. The allure of the franchise quarterback is so great that large chunks of fans are willing, even eager, to pile up losses in order to have a chance at drafting one. History has shown a strong correlation between quarterback play and winning.

Every one of the top eight rated quarterbacks heading into Week 12 of the 2011 season lead a team either in 1st or 2nd place in their division. Last year, eight of the twelve playoffs teams had a quarterback with a Top 10 passer rating. The evidence continues as far back into NFL history as one would like to look. Twenty-four of the forty-five Super Bowl MVPs have been quarterbacks. No other position has more than seven.

The question is not whether quarterbacks are a critical aspect of building a Super Bowl winning team. A better question might be how many great quarterbacks never won a Super Bowl. The course of this research has also raised the question of whether losing enough games to get a player like Andrew Luck could mean fans would have a significantly longer wait until they get their ring. The rest of this article will look at different ways to measure great quarterbacks, which of those won Super Bowls, how long it took them to win one, and why some never got the trophy.

Start with passing yards. The amount of passing yards a QB throws for is certainly one of the primary methods of evaluations for their effectiveness. 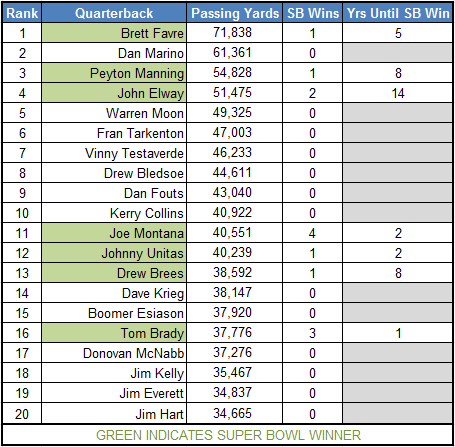 As you can see from the figure above, only seven of the Top 20 career passing yards leaders have won a Super Bowl. It should also be noted that four of those seven played within the past couple of years, and three are still playing (Peyton Manning’s career is active even if he playing status is not this year). The NFL has become more and more reliant on the forward pass to move the ball, so it stands to reason that we would see many more modern era names on the list, and a higher propensity for championships the more recently the player’s career took place.

Manning and John Elway were both taken #1 overall in their respective draft classes. No other SB winning player in this list was drafted in the first round. Interestingly, both Manning and Elway had to wait longer to get their rings than the other guys who won one on here. We will revisit the question of whether there is a strong correlation between when a franchise quarterback was drafted and how long they have to wait to win a Super Bowl later in this article.

Make not of the some of the great quarterbacks on the list that never won a championship. Players like Warren Moon, Jim Kelly, Dan Marino, Fran Tarkenton, and Dan Fouts jump out as undeniably great quarterbacks. These are Hall of Fame level talents, yet they never won the Super Bowl.

Let’s continue to build our list of great quarterbacks by looking at the NFL career leaders in touchdown passes. Eight of the Top 20 touchdown tossers have won a ring. 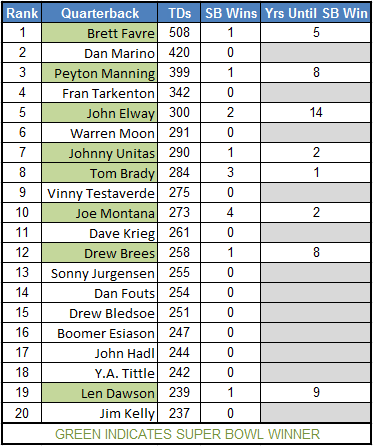 Only Len Dawson is a new addition to the list of SB winners. The other seven were also Top 20 in passing yards. There is a pattern developing in these cumulative stats where players with long careers start showing up. Every Seahawks fan loves Dave Krieg, but he does not belong next to names like Joe Montana and Drew Brees. A more time-independent statistic like passer rating might be more revealing. 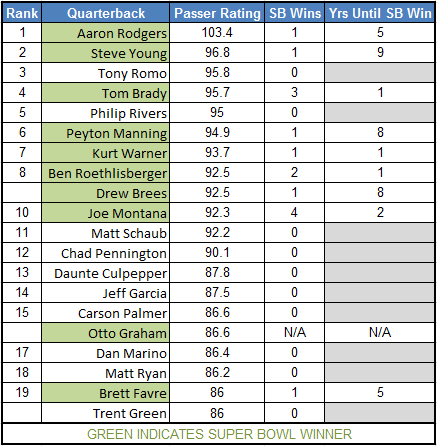 We are now up to 10 of the Top 20 with SB wins. The clustering at the top is more noticeable as eight of the Top 10 have won Super Bowls. All but three of the SB winners, and 16 of the Top 20, have played in the last ten years. This stat adds names like Kurt Warner and Ben Roethlisberger to the list of winners, and guys like Carson Palmer and Philip Rivers to the list of great quarterbacks who have not yet won. 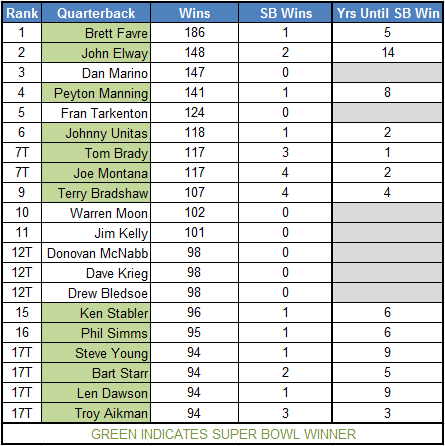 It should come as no surprise that 13 of the Top 20 career wins leaders at quarterback have won a Super Bowl. It was a surprise that this was the first list Troy Aikman shows up on, and even here, he just sneaks in. 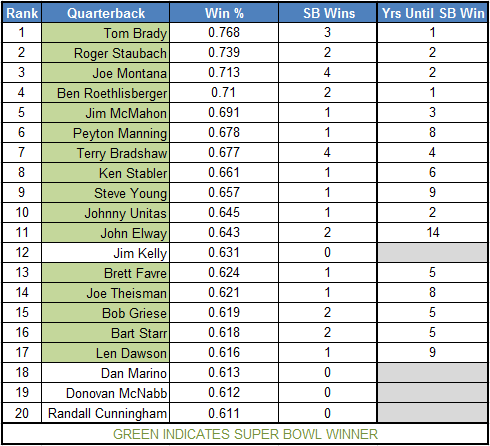 Jackpot. A full 16 of the Top 20 career leaders in QB winning percentage have Super Bowl rings, including all but one of the Top 17. Poor Jim Kelly. This raises the question again about whether the quarterback makes the team or the team makes the quarterback. Many of these players joined teams already in decent shape. Steve Young, Tom Brady, Ben Roethlisberger and others joined teams with talent around them. Eight of Top 20 winning percentage leaders were drafted in the Top 5 of their draft class. Four were drafted after pick 100. Another four were drafted between picks 27 and 52. Looking at the team winning percentages in the three years prior to drafting these players would be illuminating. That will have to wait for another time.

One thing that does seem clear is that being a team bad enough to draft #1 overall usually leads to long lag time between drafting a great quarterback and winning it all. There appears to be an almost linear trend that shows the later a franchise quarterback is found, the quicker the teams wins a Super Bowl. Take a look at the this chart of all the Super Bowl-winning quarterbacks mentioned in the above tables. 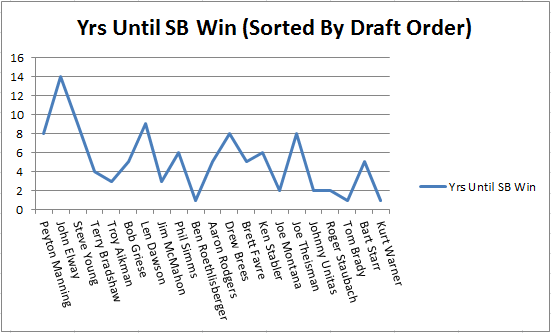 The players on the far left were drafted highest (#1 overall all the way through Troy Aikman), and the players on the right were drafted latest (Warner was undrafted and Brady/Starr were drafted 199 to give you some context for spread). The higher the peak, the longer the time between when a player was drafted and when their team ultimately won a Super Bowl. The overall average is a smidge over 5 years. Teams that don’t have their franchise quarterback yet should let that sink in. It will likely be at least five years after your team drafts the right quarterback before a parade can be planned. If you are “lucky” enough to find your franchise quarterback with the #1 overall pick, expect a wait of closer to eight years (the average is 7.6). Teams that find their Mr. Right after pick 100 average just over two years to pay dirt.

Teams bad enough to draft in the Top 10, and especially #1 overall, are almost never missing just one player. The idea that Peyton Manning or John Elway come in and take their teams to the promised land is patently false. Manning only won one Super Bowl, and that took him eight years. Elway won two, but it took him 14 years to get his first. You are talking about having a team so talent-less that it takes a decade to build the roster up to the point that it can win, and that’s if you happen to have one of the best quarterbacks in the history of the game running the show. Is Andrew Luck going to be that much better than Elway or Manning? The comparison to Manning may not be that tough if the Colts end up with the top pick. Consider, though, that by the time Luck has his feet under him at the NFL level, players like Dwight Freeney, Dallas Clark, Joseph Addai, Reggie Wayne, Jeff Saturday, and Robert Mathis will be either out of the league or near the end of their careers. The idea that Luck would just come in and turn the Colts back into contenders is something history does not give a lot of credence to.

The quarterback remains a crucial piece of any championship puzzle, but finding a great one is far from a guarantee that a championship is inevitable. The tables above list a number of Hall of Fame quarterbacks who never won it all. Previous articles have shown less than Hall of Fame quarterbacks that have accomplished the feat. How does one rationalize Doug Williams, Trent Dilfer and Brad Johnson having a ring when Dan Marino, Warren Moon and Fran Tarkenton do not? Great teams win Super Bowls. It is worth spending some time in a future article in this series doing a case study on Jim Kelly and Dan Marino. Kelly was surrounded by fantastic talent, but never quite got to the mountain top. Marino never seemed to have the defense necessary to buoy his offense. We will also explore what changed for the likes of Manning and Elway that finally got them rings after playing winning football for so long.