Vintage microphone and headphones on green background. Concept audio and studio recording. 3d
Seattle had its second padded practice, and the intensity returned in a hard-hitting session that had plenty of talking, mostly from the defense. This practice also marked the debut of new wide receiver Braylon Edwards.

OFF THE CUFF
Matt Flynn will be your starter
As I wrote here earlier, I have seen enough and listened enough after four practices to pronounce this competition over. The coaches, for the first time, did not follow the order of the depth chart for snaps today all the way through practice. Flynn and Tarvaris Jackson alternated early in team drills a few times before Russell Wilson took his first snap. Flynn did not have his best practice, as the defense played wonderfully and forced some incompletions. He also suffered a bit from the quality of receivers he was working with in the second unit. Even so, it was no contest. He owned the top two or three passes again today. His best was a deep pass to Antonio Bryant along the left sideline for a “hole shot” behind the linebackers and in front of the safety. Perfectly timed, he had to wait for it to develop, and deliver it to the right spot. His deep pass later to Cameron Morrah was another anticipation throw. The guy is simply outclassing the competition, and it is being under-reported.

Braylon Edwards will make things interesting
Bryant was the first veteran wideout signed, and his most memorable play before today was getting drilled by K.J. Wright. He had a nice day today, but does not appear to give the team anything Ben Obomanu doesn’t do better, and Obomanu can play special teams. Edwards is another story. The guy has size that gives him a unique quality. Schneider and Carroll love unique. Someone wrote that this could be a hedge against Sidney Rice’s health. Not true. Edwards means Kris Durham should try and find another team. Edwards can be a red zone threat, and a guy who can get you quality yards of first down via slants and stick routes. He could end up being a starter, but only in the sense that he is on the field first. Golden Tate, Ricardo Lockette and others could get as many snaps or more. Edwards did not dominate, by any stretch. Brandon Browner enjoyed slamming Edwards to the ground during one drill on press coverage. Edwards showed a nice ability to start and stop quickly, and also had the highlight of the day when he made a juggling catch along the right sideline on a throw from Russell Wilson. Edwards is nothing to get super excited about, but he could help this team, and will complicate the receiver picture on the roster.

Offense and defense challenged each other today
The defense dominated day one. The offense won day two. Day three was a little blah all around. Both groups came out with more intensity today, and traded blows back and forth. Cameron Morrah made Earl Thomas look silly in 1v1 drills early. Browner threw Tate and Edwards to the ground to the cheers of his defensive mates. Alan Branch, Red Bryant and Brandon Mebane took turns stuffing running plays, only to have Marshawn Lynch break a few long ones. Donny Lisowski picked off Wilson in the end zone during a two-minute drill. Marcus Trufant and Bobby Wagner each had pick-six plays. Doug Baldwin made a number of impressive catches. Perhaps, the best symbol of the day was a nice reverse to Deon Butler, who was sprung on a crushing block from Ricardo Lockette, that would have gone for 25+ yards before Richard Sherman popped the ball loose and the defense recovered. It would be great to see this offense start to really challenge the defense day in and day out.

STAND-OUT NEW FACES
WR Phil Bates
Bates was all over the field today. I counted five or six catches, some deep, some of the highlight reel variety, and some showcasing his athleticism in the open field. Strong practice squad candidate at this point.

LB Bobby Wagner
Wagner showed signs of getting up to speed today. His coverage skills may be his strength. He read a number of plays and shadowed running backs out of the back field. His best play was the pick-six mentioned above where he displayed great read-and-react ability. He must have been listening to my podcast last night. As I said there, give the kid some time. He should be okay.

CB Coye Francies and Donny Lisowski
Hard to pick between these two today. Both showed strong ball skills and covered well. Winston Guy had a pick, and could have made the list as well. Cordarro Law had another sack.

GENERAL IMPRESSIONS
There was so much going on at practice today that it was hard to take copious notes. Pass rushing drills were going on at the same time as press coverage drills. I went cross-eyed attempting to watch both. So here is some stream-of-consciousness in no particular order:

– LB Allen Bradford had a nice day, both in pass rush drills and against the run during team drills

– Ken Norton is awesome. He was barking all day, including his best moment when Lockette tossed the ball down at Roy Lewis, when Norton could be heard screaming, “Who does that Lockette? That’s your one warning. Who does that? That is not part of the program!”

– Bruce Irvin spent a lot of time running near the quarterback, but was not getting home that often. He was stoned by Russell Okung on more than one occasion. 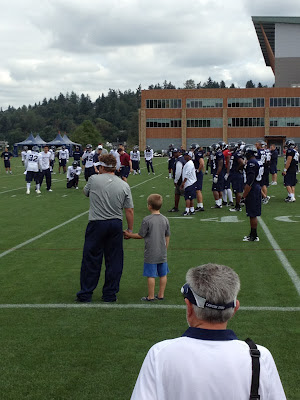 The team is off tomorrow, and then will be back at it on Thursday. Talk to you then.
Start typing to see results or hit ESC to close
real hawk talk softy russell wilson 49ers rams
See all results