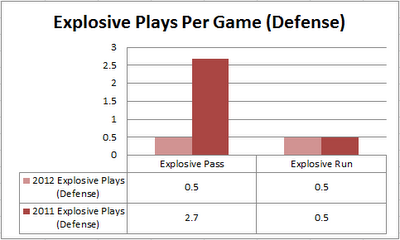 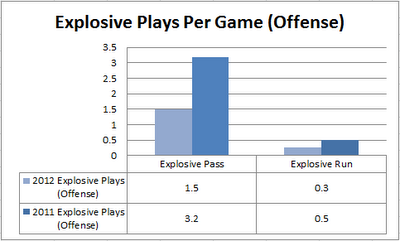 Explosive plays are going to be a key area to watch for this team, both on offense and defense. Explosive plays are defined here as 20+ yards. Usually, 10+ yards counts as an explosive run, but the NFL does not publish that stat. You can see that the defense is light years ahead of where it was last season, giving up an average of 1 explosive play per game versus nearly 4 last season. When you consider Tony Romo and Aaron Rodgers represent half the opposing quarterbacks, that number becomes even more impressive.

The offense is well behind what the team was doing last year in this area. 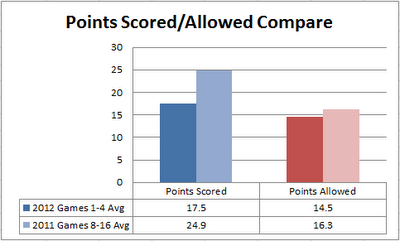 Many forget that the Seahawks scored at a good clip the last half of 2011. Can you imagine what this team would be like if it could average 25 points per game right now? They did that last year with Tarvaris Jackson playing with a torn pec, Paul McQuistan playing left tackle, Lemuel Juanpierre playing right guard, Robert Gallery playing left guard, and both Sidney Rice and Mike Williams injured. They can do better. That have to do better. The defense is relatively steady, compared to the last eight games of 2011. 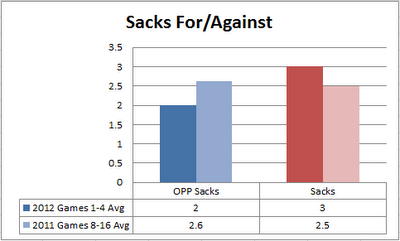 This shows that the offensive line is yielding fewer sacks than the last half of 2011, and sacking the opponents quarterback more than they were. The best sack teams in the NFL last season averaged 3 sacks per game, so it would be remarkable if this team could keep pace. 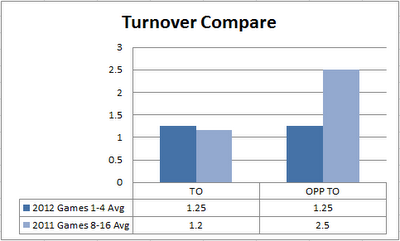 Turnovers are huge. Note, that the offense is turning the ball over at roughly the same rate as the last half of last year. It is the defense that needs to step up. They were finding ways to get the ball off the opponents last year, and are simply not doing it often enough this year. The quality of quarterback play and pass pressure are two key components. Cam Newton, Tom Brady and Alex Smith are coming up, so it will take some great play to start seeing this number rise. 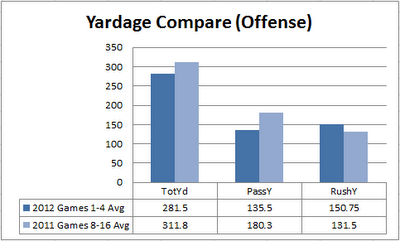 Nothing too shocking here. Although, the passing yardage differential is stark, and it is amazing that the team is managing to outpace the running attack they put out there during the last eight games of 2011. Remember, they led the NFL in rushing over that stretch. 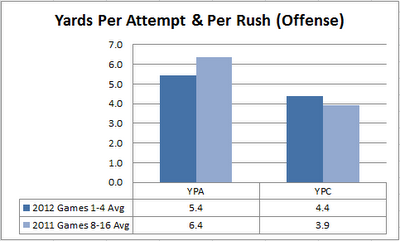 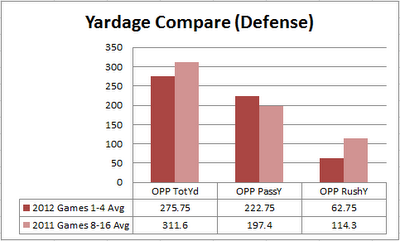 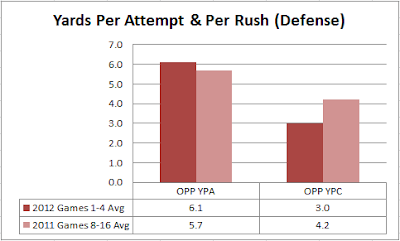 Interesting to see the defense is yielding more passing yards this year than they were at the end of last season. It is also interesting to see they’ve nearly halved opponents run production. The run defense tired significantly as the year wore on last year. If the offense cannot start to take on some of the load, the same thing will likely happen again this season.

The first quarter of 2012 has been marked by outstanding defense, remarkable rushing offense, and a team that is struggling to pass the ball and create turnovers. The team lost to two beatable opponents, and beat two marquee franchises. The team is on the road for three of the next four games, with road games against Carolina, San Francisco and Detroit. It is not hyperbole to say the way the team performs in this stretch will determine what this season can be.
Start typing to see results or hit ESC to close
real hawk talk softy russell wilson 49ers rams
See all results